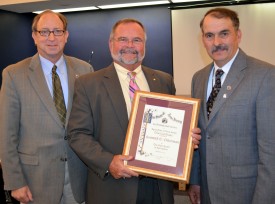 On April 24, Nurseryman Ken Osterman was presented with a Distinguished Service to Agriculture Award  by the New Jersey State Board of Agriculture in Trenton, NJ.

Osterman has played a major role in many aspects of New Jersey’s agriculture industry over the years, from leadership within Rutgers University and the New Jersey Agricultural Experiment Station, searching for Cooperative Extension faculty, to adding a calm and consistent voice to advisory boards and assisting in policy and legislation formulation. He has been a great steward of the land, working to continue preservation efforts and agricultural viability and sustainability all across New Jersey.Osterman has devoted his life to agriculture and his community. After active duty in the United States Marine Corps, he rejoined Osterman Nursery in Middlesex and Neshanic in 1971. At that time, the family business offered design/build landscape contracting. The 250-acre, permanently preserved farm now specializes in the production of specimen-sized ornamental trees and flowering shrubs for the wholesale market.

Osterman has been active in agriculture industry and community organizations since the 1970s. He served with distinction on the Executive Board of the New Jersey Association of Nurserymen, now known as the New Jersey Nursery and Landscape Association for nine of his 20- plus years of membership, chairing the Market Development Committee for three years, leading the association in developing new markets for membership development, as well as wholesale and retail markets for its members.

He has continually served as a member of the Somerset County Board of Agriculture since 1988 with a stint as President from 1991 to 1993. He formed the Rutgers Cooperative Extension of Somerset County Advisory Board in 1991 and was its first president. After 21 years of membership, he is again serving as president. He has been a member of the Rutgers Food Innovation Center Advisory Board and he continues to serve on the Hillsborough Township Agricultural Advisory Committee as well as director of the New Jersey Farm Bureau.

Osterman was a member of the New Jersey Agricultural Experiment Station Board of Managers from 2000 to 2006 and served as president from 2003 to 2005. He rejoined the board last year.