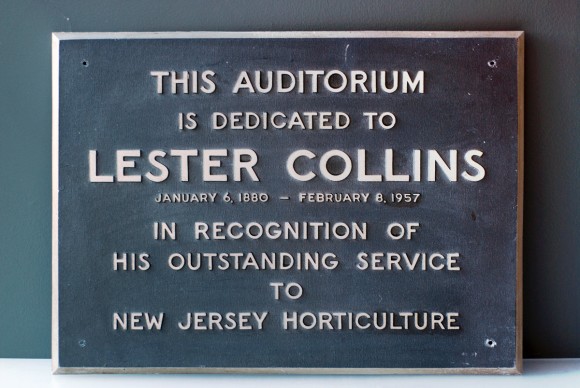 The Lester Collins Auditorium, dedicated in 1957 following the death of the noted New Jersey fruit grower and former president of the Rutgers Board of Managers, can be found in Blake Hall on the George H. Cook Campus of Rutgers University.

Originally known as the Horticulture Building, it was named Blake Hall in 1958 after the late Maurice A. Blake, professor and head of the Department of Horticulture. For the last 40 years, Blake Hall has been the campus home of the Department of Landscape Architecture at Rutgers. Blake Hall, which is located at the intersection of Lipman Drive and Red Oak Lane, recently saw the completion of a 3-year, $1.5 million renovation project.

But, just who was Lester Collins? 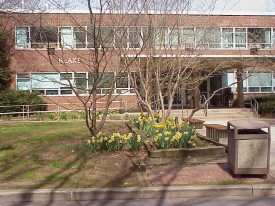 Members of the Landscape Architecture community on the Cook campus would be forgiven if they assumed that the auditorium was named for Lester Albertson Collins, a noted landscape architect from New Jersey, who coincidentally bears the same name.

In yet another strange twist, both men have ties to the development of the state of Florida. Lester Albertson’s connection to the Graham family of Dade County resulted in his architecture firm developing the Miami Lakes Master Plan, which led to a new type of town planning in Florida. The other Lester Collins, for whom the Rutgers auditorium was dedicated, was a young fruit grower tending his family’s nurseries in New Jersey while his father, John Collins, was building an agricultural enterprise in Florida, leading to the development of Miami Beach.

Below is the 1958 announcement by Dean William Hope Martin, director of the New Jersey Experiment Station from 1939–1960, on the naming of the auditorium for Lester Collins. The announcement appeared in the January-February, 1958 issue of New Jersey Agriculture, published bi-monthly by the Agricultural Experimental Station, Rutgers, the State University of New Jersey.

It is just about a year now since New Jersey agriculture suffered the loss of one of its greatest leaders in the passing of Lester Collins. We still miss his advice and counsel, his kindly humor, his unfailing willingness to take leadership in any movement aimed at promoting the welfare of agriculture. Son of an intelligent and progressive fruit grower, who was one of the founders of the New Jersey Horticultural Society, Mr. Collins received a first class education at the Moorestown Friends School, Swarthmore and Cornell. His father appointed him manager of three of his farms at the age of 17 years, so that by the time of his death he had been an active fruit grower for 60 years. It has been said – and is probably true – that in his lifetime he produced more fruit than any other man in New Jersey.

Mr. Collins was a remarkable man with a wide range of interests. He could speak with authority on almost any subject that might come up in the course of a conversation. He had strong opinions, but was always ready to listen to others who thought differently, and I doubt that he had an enemy in the world. In his later years, he and Mrs. Collins visited nearly every corner of the globe, keeping their friends back home well informed of their movements with a steady flow of postcards.

Friends and admirers of Mr. Collins, casting about for a suitable memorial to this distinguished citizen, came up recently with an excellent suggestion. They proposed that the beautiful auditorium in the addition to the horticulture building, now nearing completion on our campus, be dedicated to his memory. The proposal was put before the University Trustees and won their hearty approval. The auditorium, therefore, will be designated the Lester Collins Memorial Auditorium.

It is hard to conceive of anything which would have been more pleasing to Mr. Collins. The auditorium will be in almost constant use for meetings, lectures, conferences and similar activities, most of them, of course, being concerned in one way or another with agriculture. It will fill a long-felt need on the agricultural campus of the State University.

Perhaps at this point it may be fitting to quote the resolution which the Experiment Station Board of Managers adopted following the death of its long-time member and former president: “Whereas, the death of Lester Collins took from us one of the real elder statesmen of New Jersey agriculture.

Whereas, Mr. Collins served for many years on The Board of Managers of the New Jersey Agriculture Experiment Station, including terms as vice president and president of the Board: and

Be it resolved, that the Board of Managers of the New Jersey Agriculture Experiment Station express the sincere regret of its members and extend their heartfelt sympathy to the bereaved family, and be it further resolved that this resolution be spread upon the minutes of the board, and a copy there-of be sent to this Collins family.”