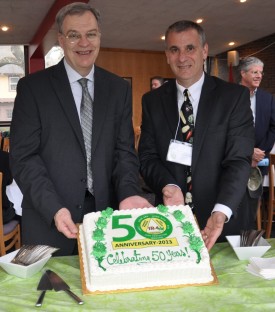 The IR-4 Project, a federal-state agricultural research collaboration headquartered at Rutgers, celebrated a milestone by hosting its 50th anniversary reception at the Rutgers University Inn and Conference Center in New Brunswick, NJ, on April 16. The IR-4 Project was established by the USDA and the State Agricultural Experiment Station Directors in 1963 to provide state-of-the-art pest management tools for specialty crops.

IR-4 began as a two-person operation at Rutgers funded by the USDA with $25,000 and has grown to a national program with 125 employees with direct funding of $18 million annually. Including the valuable resources of dedicated research plots, analytical laboratories, and office space, IR-4 estimates its in-kind support from land-grant universities, EPA, Canada and industry to be equal to the direct support of $18 million, making its annual operating budget over $36 million.

Since its beginnings, IR-4 has been the primary entity generating research data used by USDA and, later, the Environmental Protection Agency (EPA) to allow registration of pest management products for specialty crop growers. Specialty crops include most items in a salad, nut or fruit bowl, as well as those flowers and plants grown around homes or given as gifts. While these specialty crops contribute substantially to our diet and quality of life, as well as billions of dollars to our GDP, they are often considered uneconomical markets for providers of pest control products. IR-4 fills this gap, performing the research needed to support pest control products for specialty crops or minor uses on major crops, thus contributing to an abundant food supply and healthy flowers and plants that enhance the environment.

During the celebration, the Cranbury Institute’s horticulture advisor, John Wilson, gave a presentation discussing the importance of IR-4 to specialty crop growers. “IR-4’s research provides data for approval of newer and safer insecticides, herbicides and fungicides,” he noted. He then reminded the audience that “this research also enables emergency exemptions that reduce crop loss.” Wilson acknowledged IR-4’s partnership with Canada that has helped ease trade restrictions for the cranberry industry.

USDA National Institute of Food and Agriculture (NIFA) deputy director Ralph Otto PhD., along with Executive Dean of the School of Environmental and Biological Sciences Robert Goodman, congratulated IR-4 on its success over the years. “When looking at the next fifty years,” Otto said, “increased population density will lead to higher rates of disease transmission, which positions IR-4’s Public Health Pesticide Program very well for the future.” Both speakers recognized IR-4’s innovation in public health pesticides research as being most timely as the world becomes more densely populated and pest pressures continue to assault the environment.

In recognizing IR-4’s strengths, Otto talked about IR-4’s strong relationship with its allies and their willingness to fight for IR-4 in the political arena. Going forward, Otto challenged IR-4 and those in attendance to look at and engage another untapped ally, the 50 million 4-H alumni throughout the United States who are very active in promoting agriculture in local, national and international venues.

In his concluding remarks, Otto acknowledged IR-4’s greatest strength — its people, including those at IR-4 headquarters, its regional leadership teams and its “advocates extraordinaire,” specialty crop producers and other stakeholders, who all help IR-4 accomplish its mission of facilitating registration of sustainable pest management technology for specialty crops and minor uses.

To learn more about IR-4 visit www.ir4.rutgers.edu. To see a photo gallery of events visit http://ir4.rutgers.edu/photogallery.htm.