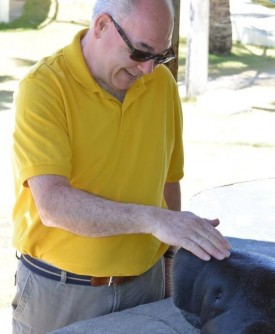 Watford also gave a seminar titled “Hans Krebs and the Krebs Cycles: A personal viewpoint” to the Department of Animal Sciences (Zootecnia), Federal Rural University of Pernambuco, Recife, Brazil. During his visit to Brazil, he also extended his collaborations with Drs. Helena Manso and Helio Manso (Federal Rural University of Pernambuco) and Ajinomoto Latina (Brasil) on the effects of glutamine and glutamate supplementation in pigs.

In addition, he visited the Manatee Center at Itamaraca, PE, where he discussed the possibility of carrying out the first studies of the nutritional biochemistry of the manatee.