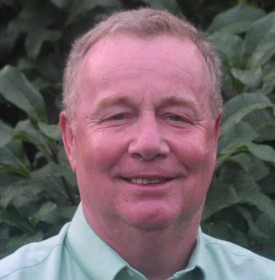 Jerome “Jerry” L. Frecon, who served the New Jersey fruit industry for the past 31 years as an agricultural resource management agent and county department head for Rutgers Cooperative Extension of Gloucester County, retired in December 2012.

His career as a pomologist spanned 46 years and focused on tree fruits, small fruits and nuts. Frecon is recognized in the Northeast as the foremost authority on peach and nectarine cultivars, having evaluated more than 1,000 varieties during his tenure in New Jersey. His work has focused on providing educational support to the regional fruit and nursery industries of southern New Jersey.

Prior to his more than 30 years with Rutgers Cooperative Extension, Frecon worked at Stark Bros. Nurseries and Orchards Co., initially in regional sales and eventually helped to develop a research division at the company. Frecon also served as instructor and assistant professor in pomology at Delaware Valley College in Doylestown, PA. Frecon has strong ties to the region, having been born and raised on a 220-acre fruit and vegetable farm, Frecon Fruit Farms, Inc. in Berks County, PA, which continues today as a thriving third-generation family operation.

Frecon will continue to lend his expertise to the industry during his retirement as a part time consultant in product development with Adams County Nursery in Aspers, PA, and as an advisor to commercial growers in the Northeast. He plans to evaluate peach and nectarine varieties in New Jersey and Pennsylvania as well as serve as a consultant to the New Jersey Peach Promotion Council.