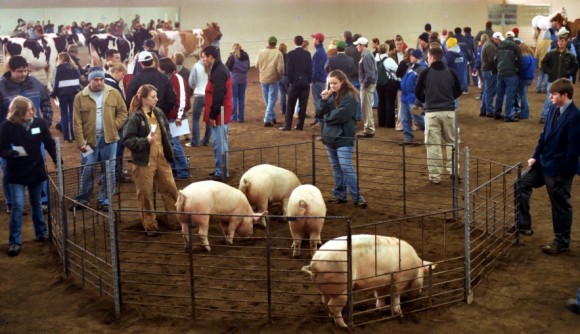 In the foreground, swine judging at the Cedar Lane Farm in Oldwick, NJ, during the NESA competition in 2005, the last time this event was hosted by Rutgers. Then, 200 students from 11 schools judged five different classes of animals in the competition.

On Feb. 23, the Department of Animal Sciences at Rutgers School of Environmental and Biological Sciences will host the American Society of Animal Science/American Dairy Science Association Northeast Student Affiliate (NESA) competition. Almost 200 competitors from land grant universities across the northeast are expected to attend the 2013 event, which offers a full day of activities that begins with early morning livestock judging at Cedar Lane Farm in Oldwick, NJ.

Several on-campus activities are also planned, including a Quiz Bowl and presentations on general agricultural topics as well as original independent student research in Hickman Hall on the Douglass Campus. An awards banquet later that evening will be held for all participants, including the day’s event judges who were recruited from among alumni, faculty, and current graduate students from the Department of Animal Sciences.

Key planning for this event was provided by Rutgers student leaders who make up the Society of Animal Sciences, together with faculty from the school, including Carey Williams, Barry Jesse, Nick Bello, Troy Roepke, Daniela Sharma, and Carol Bagnell, as well as Danielle Smarsh, a Ph.D. candidate in the Graduate Program in Endocrinology and Animal Biosciences at Rutgers.