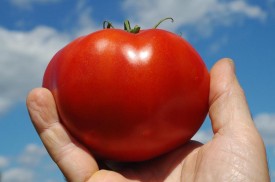 In the dead of winter, home gardeners pore over seed catalogs, carefully selecting varieties of vegetables for their home garden. A staple in most home gardens is the tomato, somewhat easy to grow and very versatile for home cooking. One feature most prized in a tomato is its flavor, the absence of which in store-bought tomatoes is often what motivates gardeners to opt to grow their own.

When it comes to flavor, the Jersey tomato is renowned for its taste. In the mid-20th century, with an abundance of canning companies operating in New Jersey, commercial tomato production for both the fresh and processing markets was a significant part of the state’s agriculture. The tomatoes on the fresh market were known for their outstanding flavor, a perfect balance of acid and sweet. As agriculture has changed over the years, so too have the tomato varieties and production practices, and the sweet-acid flavor of Jersey tomatoes has become harder to find.

Reintroducing Favorite Old time Varieties
One of the highly prized tomato varieties developed in New Jersey was the Ramapo F1 hybrid, developed at Rutgers NJAES and released in 1968 by plant breeder Bernie Pollack. It was prized by farmers and gardeners alike for its great flavor, fruit quality, reliability, and productivity. When old-time tomato varieties were being replaced by modern varieties, Ramapo seed became unavailable commercially for many years. Rutgers NJAES continued receiving requests for this popular tomato and eventually reintroduced Ramapo F-1 seeds in 2008, making it available to home gardeners and farmers.

The Moreton tomato was an early season variety grown by Jersey tomato farmers in the 1950s.

A second tomato, Moreton F1 hybrid, was added in 2009 as an early season variety to compliment the mid-to-late season Ramapo. Released in 1953 by Harris Seeds, and grown by New Jersey tomato farmers for a number of years as their early season variety, this tomato had also been off the market for a few years. In a cooperative agreement with Eastern Seed Services of New Jersey, Harris Seeds, and Rutgers NJAES, the Moreton seeds were re-introduced and made available to the public.

A Processing Tomato with Outstanding Flavor
What may surprise some people is that not all of those delicious Jersey tomatoes were varieties for the fresh tomato market. Some of them were exclusively processing varieties developed by the local canning industries, several of which were based in New Jersey. Campbell’s Soup Company had a research facility in Riverton, NJ, where tomato breeders developed varieties that would grow well in the state while also adding rich flavor and color to their canned tomato juices and soups. This enabled Campbell’s to provide their contract tomato growers with the quality tomato varieties to meet its high standards and also perform well under New Jersey conditions.

Developed by Cambpell’s Soup, KC-146 was used as their flavor standard.

One processing tomato, KC-146 (also known as Campbell’s 146) was developed in Campbell’s Riverton facility by tomato breeder George B. Reynard and released in 1956. This variety was wilt-resistant, crack-resistant and better flavored than other processing types. KC-146 was the predominant variety grown by Campbell’s contract farmers for several years. But, in Campbell’s quest to continue improving varieties, KC-146 was eventually replaced with newer varieties that had a wider range of disease resistance. Campbell’s maintained KC-146 stock as a flavor standard. New for the 2013 season, KC-146 seeds have been added to the Rediscover the Jersey Tomato lineup of old-time varieties offered for home gardeners and small farmers to recapture that flavor. Even though it’s a processing variety, KC-146 has incredible flavor as a fresh tomato. This variety was cultivated by Campbell’s growers in a number of states besides New Jersey; like Ramapo and Moreton, it can grow well in a variety of regions.

Visit Rediscover the Jersey Tomato to find out more about the program and to order Ramapo, Moreton and KC-146 tomato seeds.