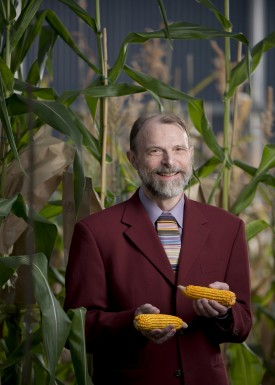 Dr. Joachim Messing, winner of the 2013 Wolf Prize in Agriculture by The Wolf Foundation of Israel.

Joachim Messing, among the world’s top experts in molecular genetics, became famous for developing a genetic engineering technique used in laboratories to create plants that have produced disease-resistant crops considered vital to feeding the world’s population. Instead of cashing in on his discovery, he gave this scientific blueprint – which revolutionized agriculture and helped to crack the genetic code of plants like rice and corn – away for free to his fellow scientists around the world.

For his contribution to humanity, Messing has been recognized by the Wolf Foundation of Israel and awarded the 2013 Wolf Prize in Agriculture. The Wolf Prize honors scientists and artists whose “achievements are in the interest of mankind and friendly relations among peoples.”

Read more about Messing receiving the Wolf Prize in Agriculture.