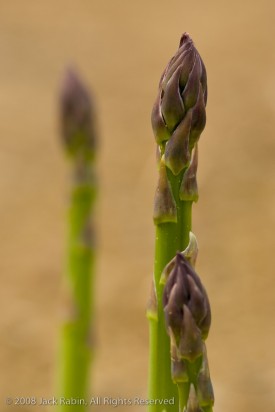 Asparagus, a perennial favorite and prized vegetable among gourmands, has attracted a wider base of devotees as research reveals the nutritional powerhouse found within its spears. One might assume that new and improved asparagus varieties originate from Europe, the epicenter of the culinary world. This is partly true, but the asparagus fancied in Europe is white, requires peeling, and the flavor is reminiscent of parsnips. For the rest of the world that prefer the more traditional, typically green asparagus, they look to North America, to a handful of select breeding programs at Rutgers, the State University of New Jersey and the University of California, in the U.S. and the University of Guelph, in Canada.

Rutgers New Jersey Agricultural Experiment Station has been engaged in a robust asparagus breeding program for close to seventy years, producing some of the most widely grown commercial varieties today.

Rutgers asparagus program gets its start
Famed Rutgers vegetable breeder Lyman Schermerhorn—best known for breeding the Rutgers tomato —introduced the Raritan asparagus cultivar in the 1940s. This cultivar demonstrated the rust resistance that had been lost in the existing USDA varieties due to improper propagation, resulting in the loss of integrity of the hybrid plants. In the early decades of the 20th century, rust was a serious disease and even the rust resistance of the Raritan variety failed under commercial conditions. Bred at the research facilities in Central New Jersey at Rutgers–New Brunswick, a location with a low level of natural rust disease pressure, Raritan failed to achieve resistance in the high-disease environment of the asparagus fields of South Jersey.

In the mid-1950s, Howard Ellison, regarded as one of the most influential asparagus breeders in history, was hired by Rutgers to head its asparagus breeding program. Ellison understood the climatic, environmental, and other factors that impact rust resistance and his insight drove the breeding industry to locate research trials in major asparagus growing regions in New Jersey and across the U.S., as well as overseas.

Industry decline and seeds of revival
Growers, especially those in the eastern U.S. suffered devastating losses from the 1960s to 1980s due to a proliferation of Fusarium crown and root rot, leading to a sharp decline in the number of acres of asparagus cultivated in the U.S.

The way back to improved vigor, not surprisingly, involved unrelenting research and extensive trials led by Ellison. From old asparagus fields in South Jersey, Ellison had identified a few asparagus plants tolerant to Fusarium foot and crown rot from among the surviving diseased plants. With keen observation, he also identified male asparagus plants with hermaphrodite tendencies—mixed-gender plants that ultimately were used to produce “super males”—which, when crossed with a female parent plant, carried a dominant male gene in 100% of the asparagus seed offspring.

Several advantages to an all-male asparagus crop were apparent. Female asparagus plants produce seed fruits, which compete with crown and roots for nutrients for the following year’s harvest. In addition, female plants produce unwanted seedlings in the production field. Also, importantly, male asparagus plants outlast female plants—desirable in this perennial crop—and because they aren’t weighed down by seed fruits, they are less prone to falling over during heavy wind and rain. 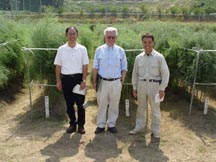 Chee-kok Chin (center) with Japanese colleagues at an International Asparagus Cultivar Trial in Nagano, the top asparagus producing prefecture in Japan. NJAES hybrids including NJ953, are among the best in this trial.

Ultimately, the new all-male cultivars led to increased productivity, greater demand from consumers, and a revival of the asparagus industry in the 1980s.

Decades of devotion by breeding leaders
Ellison is considered a pioneer in the development of all male hybrid asparagus, producing several hybrids that are considered among the most productive and widely adaptable. Steve Garrison, extension specialist in horticulture, joined Ellison in his breeding research and later took over the reins of the program when Ellison retired. Ellison, who continued to work during his retirement, invited Chee-Kok Chin, a plant tissue culture researcher and professor in the Department of Plant Biology and Pathology, to join the asparagus program.
By early 1980s, a number of asparagus breeding programs in the U.S. and Europe had developed some improved hybrids but none produced seeds on a commercial scale. Chin subsequently developed a tissue culture medium that allowed efficient cloning of asparagus parents, allowing Rutgers and others to produce genuine asparagus hybrid seeds commercially. Chin’s tissue culture protocol has also proved critical for efficient cloning of superior plants used exclusively for breeding.

In 1988, Garrison handed over the reins of the asparagus breeding program to Chin, who serves as its current director. Following his retirement from Rutgers in 2002, Garrison continued his work on asparagus variety selection, working alongside Chin and John Kinelski, a soils and plants field technician in the Department of Plant Biology and Pathology. This three-man team has driven the asparagus breeding program at Rutgers in more recent decades, contributing many of the leading varieties in commercial use. 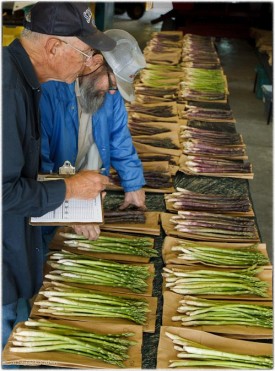 In the true sense of the Rutgers slogan “Jersey Roots, Global Reach,” asparagus cultivated and used around the world not only have Jersey in its roots but Jersey in its name: cultivars like “Jersey Supreme,” “Jersey Giant,” and “Jersey Knight”.  Improved purple and unique light green cultivars, like recently released “NJ977” and “NJ953,” are very high yielding varieties that can be grown in both warm and cool climates. In addition, they are highly resistant to rust and tolerant to Fusarium crown and root rot, and have very good spear quality.

In recognition of their contribution to New Jersey agriculture for the patent of “NJ953” male asparagus hybrid plant, the breeding team of Chin, Garrison, and Kinelski was selected as a 2012 Patent Award Winner by the Research & Development Council of New Jersey.  2012 honorees were celebrated at the Council’s 50th Anniversary Celebration & 33rd Edison Patent Award Ceremony and Reception on November 8 at the Liberty Science Center, home to the nation’s largest IMAX Theater, where an original film highlighted each patent and its inventors.

Read more on the Council and the Edison Patent Awards and view the film on the asparagus patent and inventors.