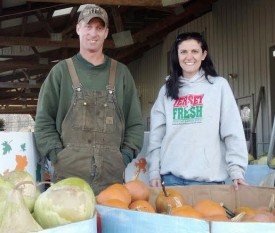 The New Jersey Department of Agriculture announced that Meredith Compton, a fruit and vegetable farmer and co-owner of Peaceful Valley Orchards in Pittstown, has been named New Jersey’s 2013 Outstanding Young Farmer by the State Board of Agriculture.

Compton, who serves as vice president of the New Jersey Agricultural Experiment Station Board of Managers, will be honored at the February 2013 New Jersey State Agricultural Convention in Atlantic City.

Compton, 38, also is in the running for one of the top four National Outstanding Young Farmer (OYF) Awards.

“Meredith Compton is a dedicated steward of the land who is helping to shape the future for agriculture in New Jersey through active involvement in America’s Grow-A-Row, which provides Jersey-grown produce to those in need,” said New Jersey Secretary of Agriculture Douglas H. Fisher. “The Outstanding Young Farmer Award helps to recognize young people, like Meredith, for the vital role they play in sustaining New Jersey agriculture.”

Compton is a first-generation farmer who chose agriculture as her career after graduating with a Bachelor of Science degree in Agronomy and Environmental Science from Delaware Valley College of Science and Agriculture. She worked at Rutgers Snyder Research Farm for 10 years, honing her production agriculture skills. After three years farming on her own while she worked at Rutgers, she decided to pursue farming on full-time basis.

Peaceful Valley Orchards also is the founding location of the non-profit organization, America’s Grow-A-Row, for which Compton is a board member. For the past eight years, the Comptons have donated land on their farm, as well as seeds and starter plants that are tended by volunteers, harvested and then donated to the hungry.

“We feel that it is essential to provide those in need with fresh fruits and vegetables and to educate people about the important role that agriculture plays in our community and to our well-being,” said Compton. “America’s Grow-A-Row accomplishes both of those goals and we are proud to say that we have been able to be a part of the success of the program. Grow-A-Row has a lot of exciting plans for the future and we are looking forward to providing many more people in need with Jersey Fresh Produce.”