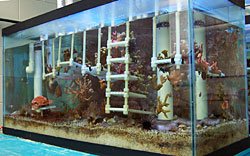 The search for novel, bioactive compounds with anti-cancer activity is proceeding full- speed ahead in Rutgers’ new Center for Marine Biotechnology. The center’s two co-directors, Drs. Paul Falkowski and Richard Lutz, announced the exciting discovery of several new compounds isolated from a shallow-water coral that induced cell death (apoptosis) in cancer lines maintained in the laboratory of Dr. Eileen White of Rutgers’ Center for Advanced Biotechnology and Medicine. Research has been funded by a combination of funds from an Academic Excellence Award from the Office of the Vice President for Academic Affairs at Rutgers, The State University of New Jersey and Rutgers New Jersey Agricultural Experiment Station.

Ongoing studies are initially focusing on invertebrates from a variety of coral reef environments. Extracts prepared by the center’s natural products chemist, Dr. Eric Andrianasolo, from these invertebrates are being tested by laboratory researcher Liti Haramaty for their ability to kill certain cancer cell lines. This approach is based on the knowledge that mutations affecting apoptosis genes are often found in malignant cells, and the ability to resist apoptosis is a hallmark of most, and perhaps all types of cancer. Assays that test for viability in the presence of marine organism extracts were run on two cell lines: an apoptosis competent cell line; and a line that was genetically engineered to be apoptosis deficient. 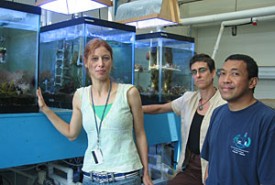 (l. to r.) Yael Helman, Liti Haramaty, and Eric Andrianasolo in front of the coral tanks.

Future work includes: continuing screening of new extracts; isolating and elucidating the structure of other bioactive compounds from our extensive collections of organisms from a variety of shallow- and deep-water marine environments; and further fractionation and identification of pure compounds associated with extracts tested to date that were observed to have apoptosis-inducing activity. Work is also being done by the center’s Dr. Yael Helman to isolate compounds involved in wound healing.

The apoptosis inducing pure compounds are being tested for selectivity and safety. The mechanism of action by which these compounds are acting were elucidated and a new patent on the method and treatment of cancer was issued (May, 22, 2012). Screening for other therapeutic indications is being considered. The center has also established a collaboration with Memorial Sloan Kettering Cancer Center for further trials of compounds in novel cancer cell lines.