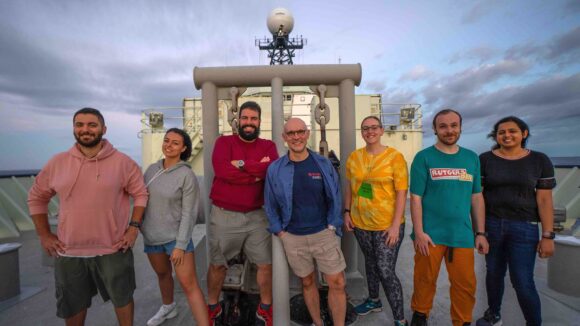 SEBS scientist Costa Vetriani, professor in the Department of Biochemistry and Microbiology, is currently on the research vessel Atlantis with three of his graduate students: Avanthika Bharath, Olivia Cannon and Ian Schlegel. They are traveling 1000 miles from the shores of Costa Rica to explore and sample the underwater volcanoes along the East Pacific rise. On board is the deep-sea submarine Alvin that will take researchers 1.5 miles below the surface of the ocean to observe, document and collect samples from these active underwater volcanoes. 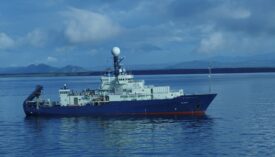 Scientists from all over the world have joined this National Science Foundation funded expedition to better understand how life flourishes in extreme hydrothermal vent environments with high temperatures and no sunlight. Vetriani’s team studies the microbial communities that form on the newly made rock from active underwater volcanoes. These microbes live off volcanic products and convert carbon dioxide into food for multicellular organisms through a process call chemosynthesis. Collaborating scientists on board the research vessel are studying how multicellular animals are attracted to these microbial communities and together create deep-sea ecosystems.

“We believe that life around deep-sea hydrothermal vents may be similar to early life on our earth. Understanding how microbes and larger organisms work together in extreme environments give us a broader understanding of the potential for life on our planet and perhaps other planets as well.” Says Vetriani.

The graduate students accompanying Vetriana are all majoring in microbial biology and are thrilled to have joined him on this expedition.

“I’ve only seen deep sea microbes under a microscope so I’m really excited to see the deep sea organisms I study in their natural environment.” Avanthika Bharath

“The East Pacific Rise is the most dynamic hydrothermal vent system. It’s a real honor to be here on this vessel with an 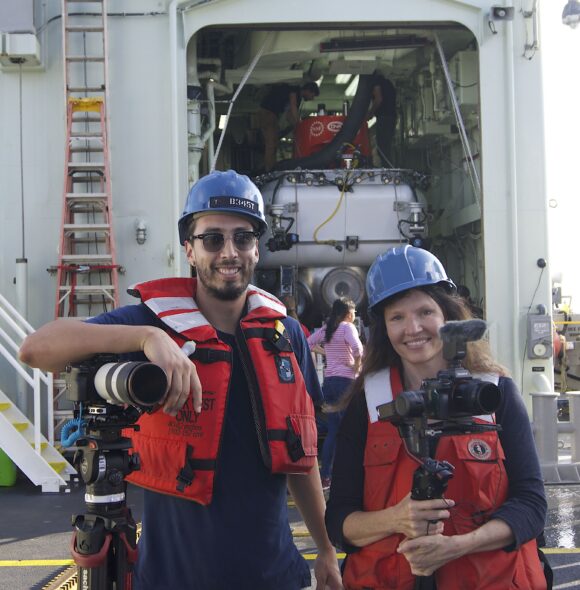 international team of scientists who study life on the bottom of the ocean.”  Ian Schlegel

“I study deep sea microbes. The chance to travel to active hydrothermal vents in a submarine is a dream come true.” Olivia Cannon

Joining the crew is SEBS science outreach specialist Dena Seidel and JP Isaacs, graduate of the Rutgers School of Communication and Information (SC&I’14) serving as the project’s cinematographer. Together they are documenting this expedition to make a one-hour science-in-action documentary. This is Seidel’s second NSF-funded ocean expedition as a science communicator for SEBS. She was also the director and producer of Antarctic Edge: 70° South (2015) the feature length documentary about Rutgers researchers studying climate change along the West Antarctic Peninsula.