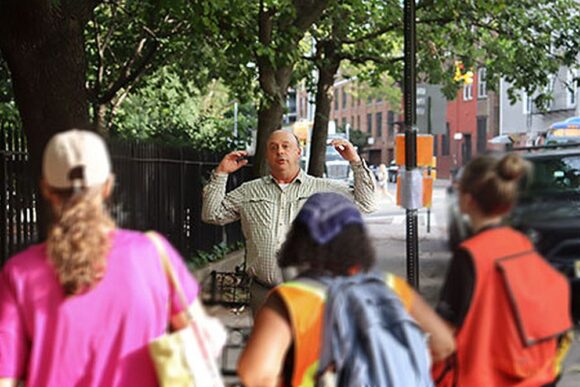 Professor Jason Grabosky, in the Department of Ecology, Evolution and Natural Resources, received an award of honorary membership from the Society of Municipal Arborists, at their annual Partners Luncheon during their annual conference this year in Seattle, Washington. Grabosky was nominated by a Natural Resource Coordinator in Ohio for his outreach work to urban forestry professionals and volunteers on a national and international level. 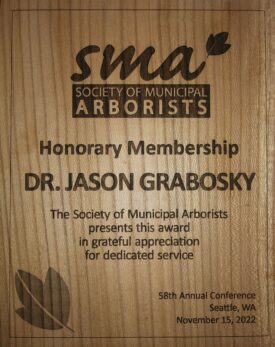 The award was made from an American elm that was lost to Dutch elm disease. It grew at the historic Columbian Cemetery in north Portland, Oregon. A beautiful piece of quarter-sawn elm with detail that only improves under magnification.

“It’s nice to receive validation for our work from the folks to whom we try to be of service,” said Grabosky. “ The fact that this comes from a national/international society from a nomination by an urban forester originating in the Midwest just provides one more small piece of evidence that extension folks at Rutgers have impacts well beyond our “back yard”.”

The Society of Municipal Arborists (SMA) is an organization of municipal arborists and urban foresters that was founded in 1964. They are a professional affiliate of the International Society of Arboriculture and have members from across North America and beyond representing tree care consultants and commercial firms, non-profit organizations, and citizen volunteers who actively practice or support municipal forestry.

SMA’s mission is to build the confidence, competence and camaraderie of professionals who manage trees and forests to create and sustain more livable communities. They work to promote a thriving and inclusive society of engaged learners through the promotion of the core values of integrity, collaboration, service, inclusivity, global perspective, and innovation. SMA produces a bi-monthly online magazine, hosts an annual conference, and runs the Municipal Forestry Institute – leadership training for urban forest managers.

For additional information you can visit the SMA website.