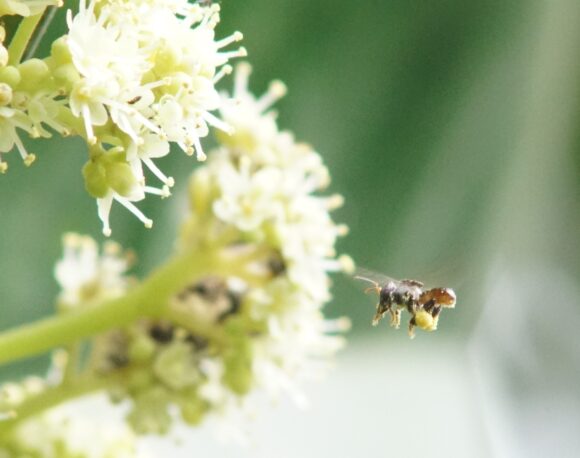 A photo of a stingless bee collecting pollen on Ilex flowers. 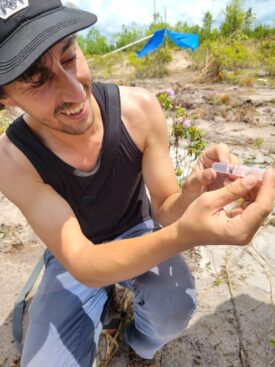 Andrew Aldercotte is a third-year doctoral student in the Rachel Winfree lab. Born in Montreal, Canada, Aldercotte left a ten-year career as a ski instructor and guide to return to academia. He has master’s degree in forestry from Bangor University in Wales, and a bachelor’s degree in economics from UC-Santa Cruz.

Aldercotte is on a ten-month Fulbright research scholarship, which started in Indonesia at the beginning of this October and will run through July 2023. Located at the Tuanan Research Center in a peat swamp forest in Central Kalimantan, Indonesia, the station is co-operated by Rutgers Department of Anthropology, the Borneo Orangutan Survival Foundation and Universitas Nasional in Jakarta. It is primarily an orangutan research center. 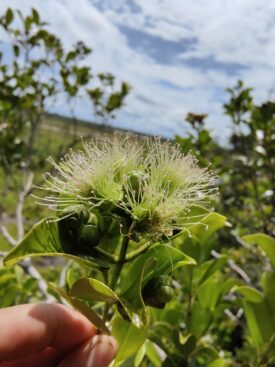 Holding one of the Syzygium flowers he is studying in the canopy. The species is still undetermined.

“I thought a blog would be a good way to document the experience and share it with interested scientists and environmentalists alike!”

Despite being a prevalent forest type in Borneo and Sumatra—the forest type that stores the most carbon per unit area of any forest type, and a critical habitat for many endangered species, such as the Bornean orangutan—very little is known about the reproductive and pollination ecology of peat swamp forest trees, and their bee communities have never been described.

“I’m trying to add to our basic knowledge of how trees in these forests reproduce, and who the important pollinators are.”