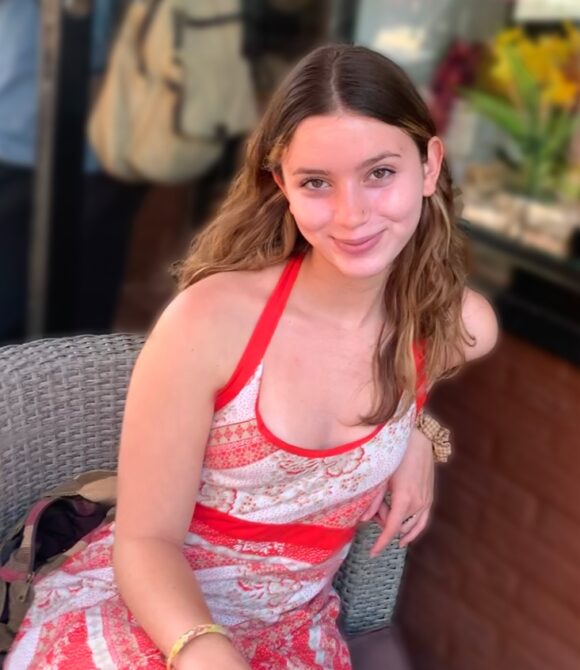 Isabel DeVita comes to SEBS already a committed environmentalist. A transfer student from the State University of New York (SUNY) Environmental Science and Forestry Program, Isabel joined us as a sophomore and anticipates graduating in 2025, majoring in Ecology, Evolution and Natural Resources where she sees lots of opportunities.

This born and raised Jersey Girl attended Voorhees High School and was part of its Polytech Environmental Sustainability and Engineering Academy for all four years, where she received an introduction to environmental science, policy and world environmental programs.

Isabel is inspired most by her hard-working, self-made parents who support her love for the environment. She hopes to take after her great uncle Robert (Bobby) DeVita—head of the Passaic River Restoration/ Education Outreach Program—who, among many other accolades, won the Governors Environmental Excellence Award in 2007.

How did you first learn about Rutgers and why did you choose SEBS?

It’s a classic New Jersey school. When looking into college I originally wanted to get out of New Jersey. At SUNY my major was natural resources management and ecology, evolution and natural resources really fit with what I wanted to do. I’ve always been interested in helping the environment. With climate crisis and all, I felt it was my duty.

What influenced you in high school to choose the pathway you’re on now?

At Voorhees High School I had the opportunity to be a part of the Environmental Sustainability and Engineering Academy from the age of 14. It was a great introduction to environmental science and taught me all of the different possible pathways.

I was a part of the first class to ever go through the program. Our freshman year we studied global environment, the broad topics of environmental problems and biomes and things of that nature. Year two we did a lot of engineering education including our aquaponics unit that we installed at Holland Township Middle School. Junior year we took AP Environmental Science and went on various field trips to wastewater treatment facilities. Senior year took place mostly online and we learned about environmental law and each student embarked on their own capstone project. Mine focused on New Zealand mud snails in the Musconetcong River, which are invasive and reproduce fast and take valuable resources from native species.

You said your family is your inspiration.

Yes, my parents Jonas and Amy are my biggest inspirations and are the ones who supported me to be in the Environmental Science and Forestry Program at SUNY. They are both self-made successes who mean the world to me! My mom was the first person in her family to go to college and is a big inspiration, really successful, always a hard worker and is now a realtor. My dad is a hard worker as well; he graduated from college as an English major and now owns his own commercial door company. My extended family is very supportive as well. My Grandma Rose, Grandpa Mike and Great Aunt Chris are all very enthusiastic about my choice of study!

I also look up to my great Uncle Robert (Bobby) DeVita. He was a very driven and smart guy. He spent 32 years working with the Passaic Valley Sewerage Commissioners and eventually became the head of the River Restoration/Education Outreach Program. This allowed for him to organize education outreach programs for school children (across 48 municipalities) to learn about and value the environment as well as clean up the waters.

In addition to the Governors Environmental Excellence Award in 2007, he was given approximately 30 other awards as well as the Good Graces Award in 2010, which he received posthumously. They even have a rowing race every year on the Passaic in his honor. Although I didn’t get to know him that well, as he passed away when I was only 6, I hope that I am making him proud.

What are you passionate about?

The environment, of course! I love animals and have been a vegetarian for eight years. I’m interested in sustainable living, and frequently shop thrift stores. I also love gymnastics, which I was involved in for 9 years. I was state champion last year and voted the ‘hardest worker’ each year. I’ve even thought about joining the gymnastics club at Rutgers.

There are SO many options. I would like to see myself in conservation, working to protect whatever I can. Policy interests me and so does environmental law. I also love Field Research. The possibilities are endless!