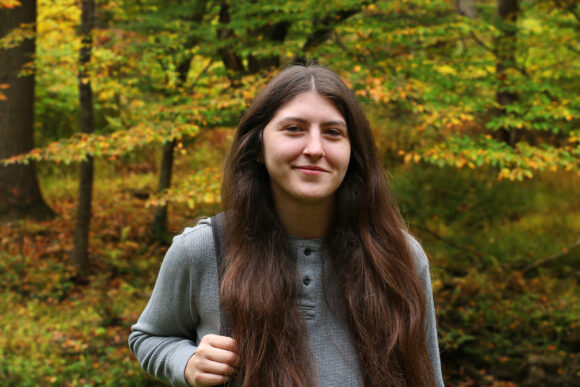 Christania Fraenkel transferred from Raritan Valley Community College (RVCC) with an associate’s degree and will graduate from SEBS in 2024. Originally a physics major, Christania quickly switched to environmental science and biology and has never looked back.

Born and raised in New Jersey, she was attracted to Rutgers for the generous financial aid, and specifically to SEBS for its hands-on curriculum and field research opportunities, which she didn’t see being offered anywhere else.

She admittedly was not ready for college in her freshman year at RVCC, failing most of her courses. She took time off, worked to pay for her next semester and, after the reset, proudly scored straight A’s!

Embracing her undergraduate career, Christania got involved with ‘Service Learning’ at RVCC. “It’s very similar to the hands-on opportunities at SEBS,” she explained. The group was initially trained by the Raritan Headwaters Association in a classroom setting on how to perform a water quality assessment, and then were tasked with picking a stream of interest and conducting their own assessments. Christania chose a small spring-fed headwater stream located in Lebanon, NJ near her house.

“Part of the reason I chose this particular stream was because it had never been surveyed by the NJDEP or any other citizen scientists, and I loved the idea of helping bridge the data-gap on headwater streams as an undergraduate and having my data used by the NJDEP.”

Christania first conducted a population survey and describe the various plant communities and their abundance found on the 100m stretch of stream, and then measured the exact area of riparian buffer present in that area ‘with the largest tape measure I’ve ever had the pleasure of using!”

The waterway was also scored based on factors like temperature, diversity of available habitat, and erosion present. Students placed mesh bags full of leaf litter in the stream to gather some macroinvertebrates. “After a few days, we collected our bags and tallied the number of each species of macroinvertebrate to serve as indicators of the water quality. “An abundance of certain species equates to excellent water quality, but an absence of that same species can mean poor water quality,” said Christania.

Christania and her class were also trained by the Raritan Headwaters Association on rain gardens, their implementation, and maintenance, and was able to go out with them a few times to help maintain their public rain gardens, completing surveys on the health of their rain gardens—looking for areas of standing water, erosion, pipe blockages, etc.—and helping to weed and maintain them when needed.

The class conducted in-depth water quality assessments on Round Valley Reservoir—taking water samples from the lake and testing it for its dissolved oxygen content, total dissolved solids, pH, and fecal matter—and conducted flower surveys on the ecological diversity of some fragmented meadows in Branchburg, NJ.

“I really loved these experiences as I was able to work with much more knowledgeable  scientists and learned some great identification tips,” said Christania. “Being involved in real hands-on science, benefitting my environment was truly meaningful and thrilling.”

While she could “go on and on about invasive species…and the deer problem,” Christania’s passion also extends to another kind of activism.

“When the Supreme Court draft opinion leaked earlier this year, it felt like the entire world stopped for me, to be honest!” she exclaimed. She read the draft, talked to almost everyone in her life about what this opinion meant for women’s rights, and ended up getting together a small group of people to go down to DC with her right after graduation from Raritan Valley to protest the decision.

“We have made four trips down to DC since then and each time have sat for hours in front of the Supreme Court to make our voices heard.” Christania also regularly writes to her representatives expressing her concerns about women’s rights and the lack of an equal rights amendment for women in the United States.

The environment is never far from her mind, however and she is also currently trying to draw as much attention as possible to the proposed Pebble Mine in Alaska, which, if constructed, would be one of the largest open-pit mines in the world.

“I’m hoping to become even more involved in activism here at Rutgers, as I’ve seen quite a few student-led protests at the university.”

An Ecology, Evolution and Natural Resources major, Christania hopes one day to be a wildlife biologist and is eager to share her knowledge. Maybe one day she’ll be teaching the next generation of SEBS undergraduate students.