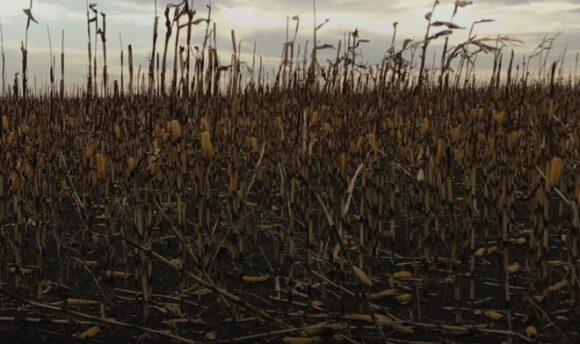 More than 5 billion people would die of hunger following a full-scale nuclear war between the U.S. and Russia, according to a global study led by Rutgers climate scientists that estimates post-conflict crop production.

“The data tell us one thing: We must prevent a nuclear war from ever happening,” said Alan Robock, a Distinguished Professor of Climate Science in the Department of Environmental Sciences at Rutgers-New Brunswick and co-author of the study. Lili Xia, an assistant research professor in the School of Environmental and Biological Sciences, is lead author of the study published in the journal Nature Food.

Building on past research, Xia, Robock and their colleagues worked to calculate how much sun-blocking soot would enter the atmosphere from firestorms that would be ignited by the detonation of nuclear weapons. Researchers calculated soot dispersal from six war scenarios – five smaller India-Pakistan wars and a large U.S.-Russia war – based on the size of each country’s nuclear arsenal.

These data then were entered into the Community Earth System Model, a climate forecasting tool supported by the National Center for Atmospheric Research (NCAR). The NCAR Community Land Model made it possible to estimate productivity of major crops (maize, rice, spring wheat and soybean) on a country-by-country basis. The researchers also examined projected changes to livestock pasture and in global marine fisheries.

Under even the smallest nuclear scenario, a localized war between India and Pakistan, global average caloric production decreased 7 percent within five years of the conflict. In the largest war scenario tested – a full-scale U.S.-Russia nuclear conflict – global average caloric production decreased by about 90 percent three to four years after the fighting.

Crop declines would be the most severe in the mid-high latitude nations, including major exporting countries such as Russia and the U.S., which could trigger export restrictions and cause severe disruptions in import-dependent countries in Africa and the Middle East.

These changes would induce a catastrophic disruption of global food markets, the researchers conclude. Even a 7 percent global decline in crop yield would exceed the largest anomaly ever recorded since the beginning of Food and Agricultural Organization observational records in 1961. Under the largest war scenario, more than 75 percent of the planet would be starving within two years.

Researchers considered whether using crops fed to livestock as human food or reducing food waste could offset caloric losses in a war’s immediate aftermath, but the savings were minimal under the large injection scenarios.

“Future work will bring even more granularity to the crop models,” Xia said.

“For instance, the ozone layer would be destroyed by the heating of the stratosphere, producing more ultraviolet radiation at the surface, and we need to understand that impact on food supplies,” she said.

Climate scientists at the University of Colorado, which partnered with Rutgers on the study, are also creating detailed soot models for specific cities, such as Washington, D.C., with inventories of every building to get a more accurate picture of how much smoke would be produced. 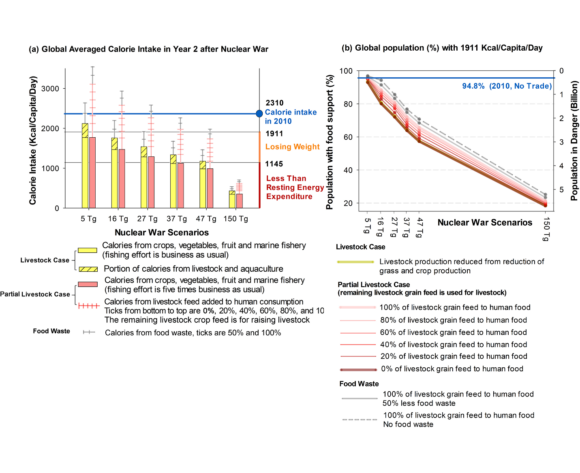 Global average change in calorie intake per person per day in Year 2 post-war. b. Without international trade, the global population (%) that could be supported, although underweight, by domestic food production at the end of Year 2 after a nuclear war if they receive the calories supporting their regular physical activity and the rest of the population would receive no food. Courtesy of Nature Food

Robock, who was recently awarded the Future of Life Award for his role in discovering and popularizing nuclear winter, said researchers already have more than enough information to know that a nuclear war of any size would obliterate global food systems, killing billions of people in the process.

“If nuclear weapons exist, they can be used, and the world has come close to nuclear war several times,” Robock said. “Banning nuclear weapons is the only long-term solution. The five-year-old UN Treaty on the Prohibition of Nuclear Weapons has been ratified by 66 nations, but none of the nine nuclear states. Our work makes clear that it is time for those nine states to listen to science and the rest of the world and sign this treaty.”