The NASA-Rutgers ENIGMA program held its fifth annual symposium, which was held at the Center for Advanced Biotechnology and Medicine (CABM) and on Zoom for a two-day hybrid event in May. Both in-person and virtual presentations by distinguished speakers and ENIGMA team members informed astrobiological research that aims to help us to better understand the origins and evolution of life.

NASA-Rutgers ENIGMA, which stands for Evolution of Nanomachines In Geospheres and Microbial Ancestors, comprises an international research team that is focused on answering a single, compelling question in astrobiology: How did proteins evolve to become the predominant catalysts of life on Earth?

The Tools of Science Case Study ENIGMA video provides an excellent overview of the way in which the team tries  to figure out how proteins, which the researchers describe as “sophisticated nanomachines,” evolved to create life on earth. 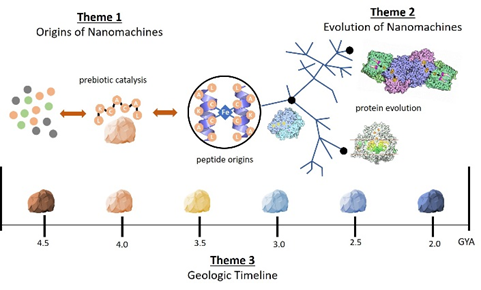 Fig. 1: ENIGMA: Evolution of Nanomachines In Geospheres and Microbial Ancestors. The NASA Astrobiology Institute team explores the catalysis of electron transfer reactions by prebiotic peptides to microbial ancestral enzymes to modern nanomachines, integrated over four and a half billion years of Earth’s changing geosphere. Theme 1 focuses on the synthesis and function of the earliest peptides capable of moving electrons on Earth and other planetary bodies. Theme 2 focuses on the evolutionary history of “motifs” in extant protein structures. Theme 3 focuses on how proteins and the geosphere co-evolved through geologic time. Credit: Vikas Nanda.

The symposium covered the range of astrobiology topics, including how proteins possibly emerged and evolve to understanding alien oceans and search for life in deep Space. Principal investigator and director of the ENIGMA program, Paul Falkowski, a Distinguished Professor in the Department of Marine and Coastal Sciences, provided the welcome and introduction at the symposium. Program team leaders, Vikas Nanda, Yana Bromberg, and Nathan Yee presented current research being conducted at Rutgers with an international team of collaborators.

“Over the past five years, the ENIGMA program has made incredible progress in understanding the origin and evolution of life on Earth.  It has also been transformative at Rutgers, where we have collaborations across three schools, have developed an undergraduate minor in Astrobiology, and made many connections across the country and around the world,” said Falkowski.

“We also are very proud that we have developed a very exciting outreach program that entices elementary and secondary school students in underprivileged districts to think about science as fun.”

2022 ENIGMA symposium presentations that are available to the public can be viewed on the ENIGMA Astrobiology Symposium YouTube Channel. The program pamphlet can be found at link here with more information and abstracts.

The symposium ended with in-person attendees being treated to a tour of Rutgers renowned RCSB Protein Data Bank that was lead by Jason Kaelber, director of Rutgers CryoEM & Nanoimaging Facility in the Institute for Quantitative Biomedicine, and David Sleat, director of the Biological Mass Spectrometry Facility at Rutgers Robert Wood Johnson Medical School.

The ENIGMA team has made significant accomplishments in its primary goal of understanding the origin of biological catalysis that leads to life. More information on the program, bi-monthly seminars and listing of publications from our team can be found at our website. The ENIGMA Astrobiology YouTube Channel catalogs the public recordings from previous symposiums.