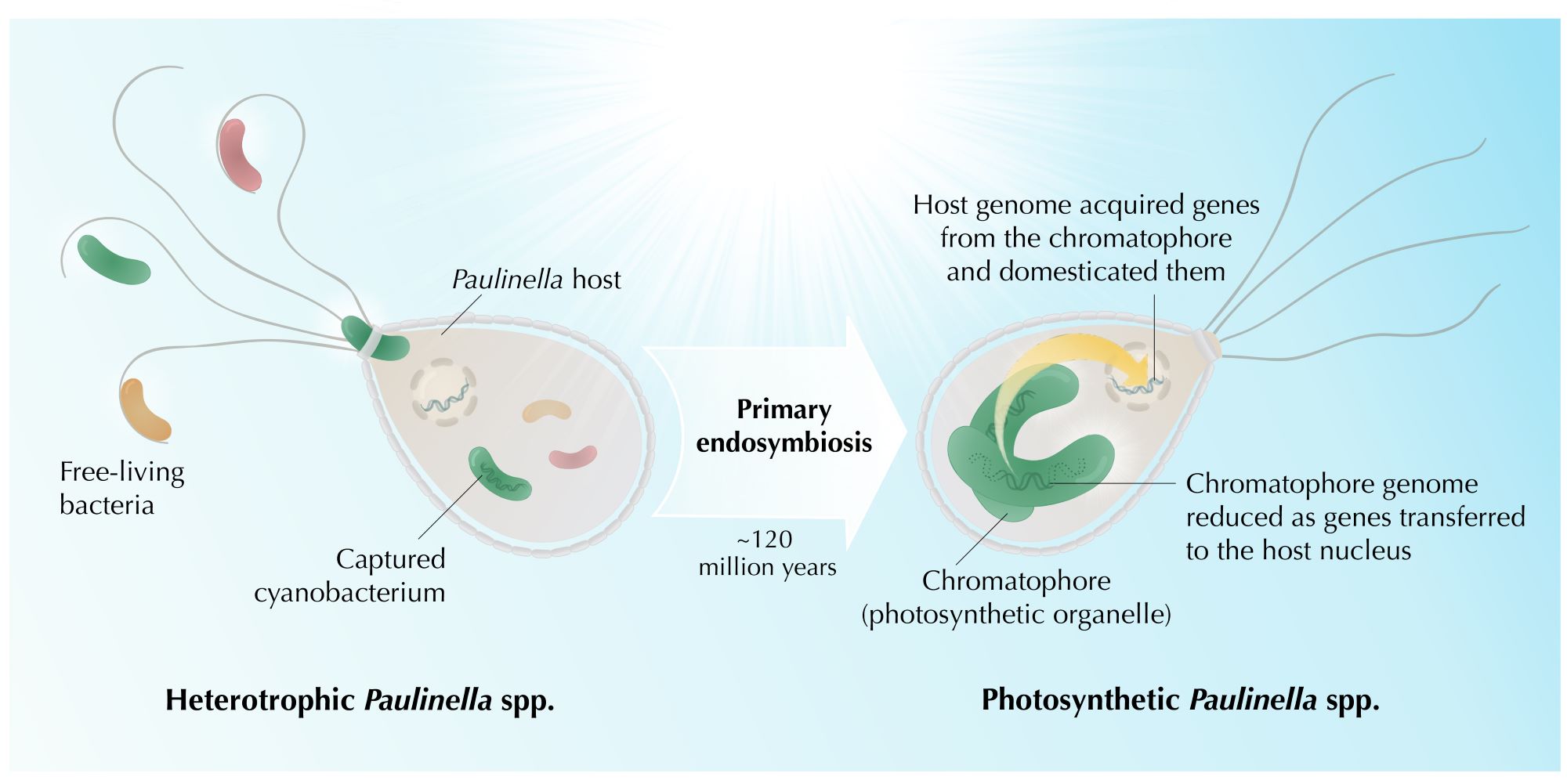 The transition from a heterotrophic to a photosynthetic lifestyle by the amoeba Paulinella. This primary endosymbiosis led to the origin of a new organelle (the chromatophore) and gene movement from the endosymbiont to the amoeba nuclear genome. Image created by Victoria Calatrava.

Tiny bacteria and massive trees are both integral to sustaining our planet. A few billion years were required for the evolution of biological complexity and therefore it is a challenge to elucidate critical, early events that triggered this diversification.

A paper, “Retrotransposition facilitated the establishment of a primary plastid in the thecate amoeba Paulinella,” published in the Proceedings of the National Academy of Sciences, provides insights into the events that mark the long and winding path that led to the complexity of photosynthetic life on Earth.

Researchers include Debashish Bhattacharya, a Distinguished Professor in the Department of Biochemistry and Microbiology at the School of Environmental and Biological Sciences in Rutgers–New Brunswick, and Rutgers post-doc associate Timothy Stephens and doctoral student Arwa Gabr, in collaboration with Victoria Calatrava-Porras, Arthur Grossman and Devaki Bhaya of the Carnegie Institution for Science.

In this process of ‘organellogenesis’, the engulfed cyanobacterium lost most of its DNA, with some genes being transferred to the genome of the host. The proteins encoded by these transferred genes were imported into the developing organelle where they function. This relocalization of genetic information likely enables the host to gain more control over the cyanobacterial genes and the structure-function of the now resident organelle.

The only other known case of a plastid primary endosymbiosis occurred in the amoeba Paulinella, which harbors an organelle derived from a much more recent engulfment (~100 million years ago). This event drastically changed the lifestyle of Paulinella, which no longer needs to hunt for food, but instead thrives with just water and sunlight, like algae and plants. However, the new organelle of Paulinella, which is called a chromatophore, is still evolving, making it a unique system to study evolution in action.

The team found that various genes that moved from the chromatophore to the host genome developed features associated with the amoeba nucleus, which are very different from those of the original cyanobacterial genes. Some of these transferred genes duplicated, establishing gene families. The largest cyanobacterial-derived gene family on the Paulinella nuclear genome (>50 members) encodes High Light Inducible (HLI) genes that help cells cope with high light stress.

Expansion of the HLI gene family was at least partly facilitated by retrotransposition, a “copy-paste” process whereby a messenger RNA of a gene is used as a template to synthesize DNA copies that can be integrated at different positions in the genome. The integration of the retrocopied genes allowed some of them to associate with new regulatory elements that improved and differentiated their response to excess light, when the cells would be highly susceptible to damage.

A next step in the project is to use genetic tools to express known and new-to-science genes from Paulinella in a cyanobacterial model developed by Grossman’s group. The goal is to identify the function of novel genes that evolved independently in the amoeba that may confer resistance (e.g., to high light and salt stress) when introduced into the genome of commercially important algae and plants.

This research is supported by funding from the National Aeronautics and Space Administration, National Institute for Food Administration-USDA Hatch grant and the Carnegie Institution for Science.

This article first appeared on the Rutgers Research website.