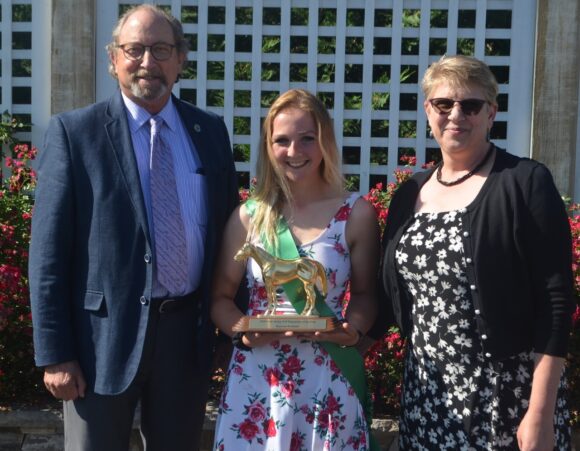 Upon hearing about the impending retirement of Somerset County 4-H agent Carol Ward, Equine Science Center director Karyn Malinowski was immediately interested in highlighting someone who has given so much back to the equine and 4-H community.

Ward joined RCE in 1986 after receiving her bachelor’s degree in Animal Husbandry from the University of Connecticut in 1983, and her master’s degree in Dairy Science from Clemson University in 1985.

When people would learn of her degrees in Animal Science, most would assume that Ward wanted to be a veterinarian. Ward’s response was always an emphatic, “No – I want to be a 4-H agent!” And through her position as an agent, she has shown just how much she truly enjoys working with youth audiences and volunteer adult leaders.

Ward began her RCE career as a 4-H agent in Atlantic County, which was followed by a transfer to Warren County, and finally permanently took residence in Somerset County where she spent the rest of her career.

Initially she was not received warmly by the horse program leaders in Somerset County who thought that she was a “cow” person who didn’t have much equine experience. Ward was able to turn that lack of trust around by attending as many activities as she could and introducing herself to people throughout the county.

Ward fondly remembers her first mentor in Atlantic County, 4-H agent Rita Natale, as well as her extension colleagues, T.C. Floree-Buchanan and Annette Devitt. She recalls that T.C. was the adventurous person, while she and Annette were more “by the books,” (which is probably why Ward was so successful as the faculty liaison for the NJ 4-H Horse Project Advisory Committee).

With the understanding that the horse leaders were the experts in running these events and activities, and with the assistance of fabulous leaders like Estella Almeida who chairs the State 4-H Horse Show, Ward was able to help the leaders run the state-wide program effortlessly. She spoke warmly about the dedicated and passionate 4-H Horse Project volunteers who would help guide her before she devised a plan for working together, incorporating everyone’s ideas.

More recently, a new hurdle came as Ward spoke about how Covid-19 changed her programming and events. “It taught us how to do our work in more than an in-person format,” said Ward. “Holding educational programs and events virtually enabled us to expand our audiences, to have experts from all over the world, and to reach people who like learning virtually.”

Ward hopes that Rutgers Cooperative Extension (under which 4-H is housed) will be able to hire more expert faculty and staff in the future who will utilize these new avenues for learning. “That is what Cooperative Extension is all about – providing science-based information for our constituents,” says Ward.

In discussing the highlights of her life and career, Ward is not hesitant to mention the fact that she is most proud of her two daughters Ashley, who has a graduate degree in Pharmacy from Rutgers, and Emily, who will graduate in May with a master’s degree in Health Sciences from the Ohio State University.

Ward is proud of their success but also of the fact that they are responsible and caring adults.

A major career highlight for Ward is the lasting impact on kids that you make as extension professionals. She really enjoys seeing how 4-H members learn, grow and eventually achieve their goals.

In June of 2020, Ward had the opportunity to present the New Jersey “Equestrian of the Year” trophy to one of her former members from Somerset County. She had not seen the recipient for a year, and she asked what her former member was now doing.

The young woman was elated to let Ward know that she was now a professional rider and trainer and making a living doing what she loves. “That is the reward for a job well done,” said Ward, “seeing our 4-H members succeed.”

Ward also fondly spoke about another former Somerset County 4-H member and teen leader, Conrad, who formed a new magic club in Somerset County and now performs magic shows all over the country. “Thank you for believing in me when I didn’t believe in myself” he told Ward, something that has stuck with her, exemplifying the difference that 4-H agents make in young lives.

When asked about her vision for Rutgers Cooperative Extension and youth education in animal sciences, she was quick to respond, “Our youth need to be made aware of the opportunities that exist in the animal sciences beyond veterinary school, and that many of these careers impact human medicine as well.”

Ward and her husband Nelson are building their retirement home in Ohio. As a parting gift, she requested two hazelnut trees and Scarlet Red dogwoods from Rutgers. They are currently in Ohio waiting to be planted!