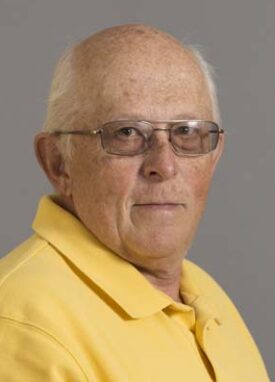 The award was presented to Kline for his many years of dedicated service as an associate professor and agricultural agent, whose expertise in commercial vegetable production and on-farm food safety training have been of great assistance to over 300 growers and agribusiness personnel. The award is in recognition of his “knowledge and abilities as an educator are a source of food production assistance not only throughout New Jersey but also overseas in Central America. These contributions matter greatly in a fast-changing world of new technology and the challenges of maintaining a safe food supply amid an ever-expanding human population. Farm Bureau appreciates the passion with which he offers support to the viability of farmers and farming on a daily basis.”

Kline’s current initiatives focus on microbial food safety on the farm as it relates to pathogens in soil, water, and post-harvest handling; new ethnic produce for New Jersey; and screening bell peppers for horticultural characteristics, disease, and Phytophthora resistance. Kline leads the Rutgers On-Farm Food Safety team, along with Mercer County agricultural agent Meredith Melendez, and senior program coordinator Jennifer Matthews. Prior to joining Rutgers in 1996, Kline served in various roles in agriculture in Central America, where he served in advising and consulting positions for the US Agency for International Development. He also served as an extension specialist at Cornell Cooperative Extension, where he received his masters and doctoral degrees in vegetable crops.

Kline commented, “For the last 25 years I have spent more and more time concentrating on how to help the produce industry in New Jersey adapt to the changes related to food safety. My goal is to help growers produce safe food, but at the same time keeping their costs as low as possible.”

In addition to numerous other awards, Kline was awarded the Distinguished Service to New Jersey Agriculture in 2014 by the New Jersey State Board of Agriculture, and recently the Rutgers On-Farm Food Safety team received the 2020 Distinguished Team Award for the Northeast Region from Epsilon Sigma Phi (ESP), the honorary fraternity for cooperative extension professionals.