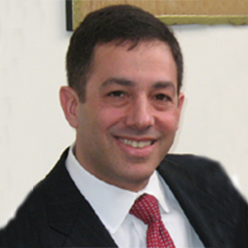 The arrival of a new president brings a sense of hope and optimism to any higher education community. But for Rutgers alumnus and DiversityInc founder Luke Visconti, Rutgers President Jonathan Holloway’s actions on his first day in office were more than promising—they were visionary.

“His leadership really inspired me,” says Visconti CC’82, reflecting on Holloway’s July 1, 2020, announcement of a universitywide fundraising initiative. Holloway called for a renewed and long-term strengthening of the Scarlet Promise Grants program, which provides need-based support and emergency aid for Rutgers students as they pursue their academic goals. Moved by the incoming leader’s decision to commit a portion of his own resources toward the $10 million campaign goal, Visconti resolved to make a high-impact contribution himself.

That in itself was nothing new—Visconti has long been a generous donor to Rutgers causes such as the Rutgers Futures Scholars program and the Veterans Emergency Scholarship. But in making his latest gift, including a $500,000 capital pledge to the Scarlet Promise Grants Current Use Fund and a $100,000 donation to the Scarlet Promise Grants Endowment Fund, Visconti was driven by the idea of, as he puts it, “building the ‘beloved community’ that Dr. Holloway has been speaking of.” President Holloway introduced the concept of the beloved community to further develop a university culture imbued with tolerance, diversity, and the spirited exchange of ideas.

Visconti launched DiversityInc in 1997 as a digital forum in which to examine issues of diversity, equity, and inclusion in the corporate world. Today its flagship publication reaches more than a quarter-million readers every month, leveraging DiversityInc’s decades-long relationships with national and global businesses to illuminate the concrete benefits of a diverse workforce. In 2019, Visconti turned over his duties as CEO to Rutgers alumna Carolynn Johnson RBS’12 and began focusing more on writing and philanthropic activities.

Through the DiversityInc Foundation, Visconti awards funds to a wide range of education-related causes, primarily scholarships. He views Scarlet Promise Grants as crucial to equipping the next generation of leaders and sustaining “a positive cycle in which a community of people who have been helped turn around and give back themselves,” he says. He also believes Scarlet Promise grants will go a long way toward leveling the playing field between Rutgers and Ivy League institutions.

“When I was a college student, state funds paid 75 percent of the cost of an undergraduate education,” says Visconti. “Today, they only pay for 20 percent.” He says this makes donations, large or small, “the only way to close that gap.”

If there’s one thing he’d like potential Rutgers donors to remember, it’s this: “You don’t have to wait until you have a large chunk of money” to make a meaningful impact. Whether the cause is Scarlet Promise Grants or another area of the university, “it’s participation that matters, not amplitude. To build the community you want to see, you have to be active in building it.”