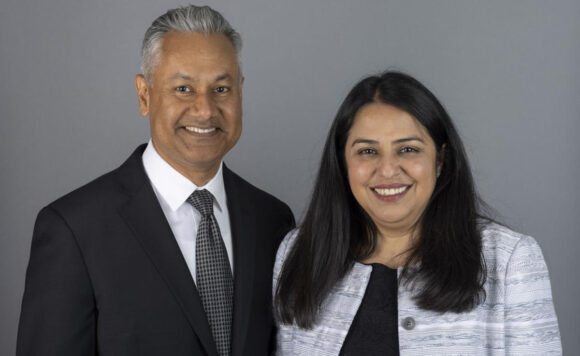 Although Navneet GSNB’99 and Reema CC’98, GSNB’01 Puri are long-standing advocates and alumni supporters of Rutgers through philanthropy and service, their latest gift resonates on a personal level.

For the past few years, Reema’s mother has been coping with various stages of Parkinson’s disease. Reema describes their journey to learn about the disease and how to care for a loved one with Parkinson’s as “long,” due to the disease’s many symptoms and the often-complicated medication regimens that offer the best symptom relief. Although much progress has been made in treating the disease, many more answers are still needed.

The Puris’ contribution to this search for answers will begin with a commitment of $1 million to fund Parkinson’s disease research at Rutgers’ Center for Advanced Parkinson’s Research.

The center is directed by M. Maral Mouradian, the William Dow Lovett Professor of Neurology and the director of Rutgers Robert Wood Johnson Medical School’s Institute for Neurological Therapeutics. In meeting with Mouradian, the Puris were impressed with her passion for research and advancing Parkinson’s disease treatments. For them, there was no question that Mouradian would be the ideal champion for undertaking new research fueled by philanthropic support.

The Puris know that a cure for Parkinson’s is a long way off, but they are hopeful about the future of research into this disease at Rutgers. “Ultimately, the patients will be the beneficiaries of this research. But there is a long road ahead, and all efforts, big or small, are needed to realize the goal of finding new treatments or a cure for patients,” says Navneet.

The Puris’ gift will help to widen the resources available to scientists at Rutgers, strengthen infrastructure, and advance training initiatives to support the next generation of biomedical researchers. According to Mouradian, researchers are at an unprecedented stage in scientific exploration and discovery that holds the promise of translating basic knowledge into practical tools and new cures to improve the lives of those with Parkinson’s disease.

“Rutgers is at the forefront of so much extraordinary research in many areas. Giving back to this great work is just a small part of what we can do as alumni, and we hope other alumni and supporters thinking of giving back to Rutgers find their passion as well,” says Reema.

Philanthropic support provides vital funding for advancing research, education, and clinical care at Rutgers Biomedical and Health Sciences (RBHS). “Support from donors like Navneet and Reema Puri helps us remain at the forefront of critical scientific research in areas such as Parkinson’s disease,” says Brian Strom, chancellor of RBHS and executive vice president for health affairs at Rutgers.