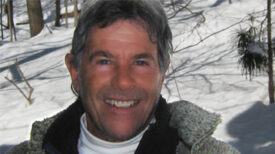 Anyone who has marveled at the growth from seed to sprout and bud to bloom, relished the aroma of herbs, or found themselves calmed in the presence of greenery, can understand the restorative power of plants. But professor and Bergen County agricultural and natural resources agent Joel Flagler (CC ’74), a registered horticultural therapist, has put that understanding to work by developing the first curricula in horticultural therapy (HT) at Rutgers, which is one of the few accredited, university-based programs in the U.S. He has also created more than 40 HT programs in New Jersey, designed to meet the needs of veterans, post-stroke seniors, developmentally disabled individuals, correctional youth, and other special needs populations.

Horticultural therapy is one of several areas that falls under the umbrella of people-plant relationships, as designated by the International People Plant Council. It is distinguished as a therapeutic treatment that uses plants and plant-based activity to achieve specific goals within an established treatment, rehabilitation, or vocational plan. Trained horticultural therapists work at schools, and in healthcare, rehabilitation, and residential settings where multidisciplinary treatment teams provide services to individuals with disabilities and/or health conditions.

The Rutgers program, which is administered by the Department of Plant Biology at the School of Environmental and Biological Sciences, has made its impact far and wide. It continues to propagate a growing crop of certified horticultural therapists, meeting the growing demand for these trained professionals, and ultimately, changing lives of New Jersey residents and beyond.

The development of the Rutgers HT program was gradual but steady, and Flagler credits the extensive support he had along the way for its success. But the very beginning of Flagler’s journey into HT is an interesting story, with the seeds being planted more than 50 years ago at Rutgers. 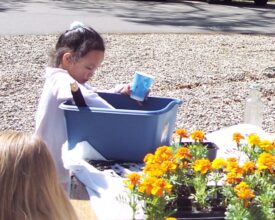 It was 1970, Flagler was in his freshman year at what was then Livingston College—Rutgers’ non-traditional liberal arts college—and he was in need of some anchoring. He made his way over to what was then Rutgers College of Agriculture and Environmental Sciences (soon to become Cook College and now the School of Environmental and Biological Sciences), where he met with undergraduate adviser Tom Concannon, who suggested Flagler take an aptitude test. When the results were in, Concannon found Flagler’s scores highly unusual. “He said I was most suited to be in agriculture or psychology,” says Flagler, “and he also said there was really no coming together of these two disciplines.” While his adviser had some initial reservations, Flagler developed a different perspective. “That was my moment,” he says, “and I spent the rest of my life forging the bridge between psychology and agriculture.” Encouraged by Concannon, Flagler took courses in agriculture, wildlife, and forestry, while also pursuing courses in psychology and sociology.

Flagler majored in horticulture, and at the prodding of his professors, worked hard, did well, and became a Cook Scholar, conducting research on the Atlantic Brant at the Jersey Shore. “Rutgers has put some wonderful people in my path and at the time, it was professor Jim Applegate and professor Leonard Wolgast in Forestry and Wildlife, along with professor Jim West, who was then chair of the department,” says Flagler. Upon his graduation in 1974, to Flagler’s amazement, West recommended he apply to Yale for graduate school. Not only was he accepted to Yale, but he was also given a full scholarship and went on to earn his master’s in forestry. 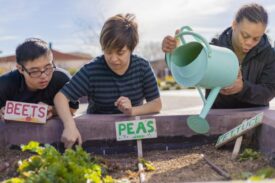 After a stint in the Forest Service in California, Flagler returned to New Jersey and began a career in horticultural therapy, which was in the seedling stage at that time. The American Horticultural Therapy Association (AHTA) had just been established in the mid-1970s, and Flagler learned of the organization and became a member in 1982. AHTA offers the only recognized credential for horticultural therapists (Horticultural Therapist–Registered or HTR), and Flagler received his certification in 1984. Flagler’s long connection to AHTA has enabled him to be at the forefront of the organization and the industry. Ultimately, he would serve two terms on the AHTA board of directors and play a role in steering the direction of the professional association.

While Flagler was serving as the horticultural therapy education coordinator at the New York Botanical Garden in the Bronx during the mid-1980s, once again, some wonderful people from Rutgers happened in his path. First, it was Rutgers Cooperative Extension (RCE) of Bergen County agricultural agent Ralph Pierson, who in the late 1980s was approaching retirement and suggested Flagler apply to be his replacement. Pierson introduced him to the chair of the agricultural agent department, Jack Kupcho, who was one of a number of individuals at Rutgers with an appreciation of and vision for the HT industry, and its potential fit with Extension and the university. Flagler was hired in 1987 as an extension consultant for RCE of Bergen County, and entered the tenure stream as RCE agricultural agent in 1988.

Kupcho’s encouragement fueled Flagler as he began sowing the seeds of HT through Extension. “That encouragement meant the world to me,” Flagler says. “I was an ag agent and where I could find ways to introduce HT, I did—whether it was for farm families who had a disabled family member or presenting HT to the Bergen County Health Department, which was unfamiliar with the concept but were willing to give it a try. ‘Let’s see what you can do with this, Joel,’ that’s been my life—one pilot project after the next.”

The support for incorporating HT was not limited to Extension. It was also soon embraced by the college, and once again more wonderful people from Rutgers crossed Flagler’s path—including every Plant Biology department chair from the late 1980s until present day, beginning with professor emeritus Chee-Kok Chin. 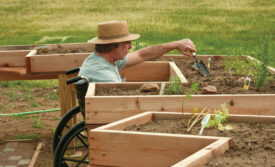 It was with Chin’s assistance that the foundation for Rutgers’ Horticultural Therapy program was laid. Flagler wanted to introduce a course on HT, but had no idea how to go about it. Chin had Flagler start as a guest lecturer and, after seeing how well the students responded, he helped Flagler create the very first course, “Introduction to Horticultural Therapy.” Around this time, in 1990, the International People Plant Council had hosted its first international symposium on People-Plant Relationships. The second symposium was held in 1992, hosted by Rutgers, with Flagler as chair. Flagler published the proceedings from the symposium and that publication, “People-Plant Relationships: Setting Research Priorities,” put Flagler and Rutgers’ HT program on the map. He used it as a teaching guide and a number of institutions used the publication as a college text.

Chin’s successor as department chair, professor Jim White, helped Flagler expand the HT offerings at Cook College by creating a curriculum and a certificate program, and getting a bachelor’s degree minor option passed through the curriculum committee. As the HT programs implemented by Flagler around New Jersey grew, opportunities dovetailed with the HT academic program: they became the venues for intern placement.

The support continues with current Department of Plant Biology chair, professor Don Kobayashi, who has accompanied Flagler on many site visits to arrange placements of Rutgers HT interns. And just as Chin helped Flagler put the first brick in the wall, Kobayashi has helped Flagler cement the program for the next generation of HT students. Anticipating Flagler’s pending retirement, Kobayashi worked with Flagler to install a new director of the HT program. And who better to take the reins than one of Flagler’s former students and a graduate of the Rutgers HT certificate program?

Gary Altman, a registered horticultural therapist, is the new program director, and in addition to carrying on Flagler’s legacy at Rutgers, Altman plays a key role at AHTA, serving on the national board of directors.

Kobayashi is pleased to see that Flagler’s legacy is secure and will continue to grow, acknowledging that had it not been for Flagler founding the program, it would not be on anyone’s radar. “He has built it to a level of worldwide recognition, where we regularly get inquiries from international people of interest about taking our courses,” says Kobayashi. “When people try to find educational courses that will lead to them developing their own, they come to Rutgers first.”

Flagler can look back on a legacy where he has helped establish many HT programs and amassed numerous media interviews and awards. But what he relishes most are the comments, feedback, and successes he observes in his HT clients.

A recovering stroke victim who considered giving up on life found purpose through their rehab facility’s HT program and admitted, “I gained so much of my range of motion and skills with my hands that now I can feed, dress and toilet myself, and now I’m a passionate gardener.” In a program held at Rutgers Gardens for youth from a correctional facility, one participant said, “If I ever run out of money, I can grow my own food now.” Another youth participant learning green industry skills went on to apply and was admitted to Rutgers.

From the initial seed planted in 1970, a new Rutgers program took hold, was nurtured, and grew. The seeds have now been sown so that another horticultural industry now flourishes in the Garden State, thanks to Joel Flagler and the supportive people who have been in his path.