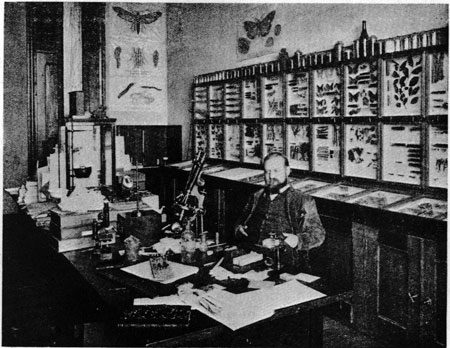 John B. Smith and the Rutgers Insect Collection

The little-known Rutgers University Insect Collection is one of the largest and most comprehensive collections of New Jersey insects in the world. It was conceived in 1888 by the Reverend George Hulst, the first director, and the first acting professor of entomology of the Rutgers Department of Entomology. Then beginning in 1889, through the tireless efforts and vision of Professor John B. Smith, the second entomologist at Rutgers, a foundation was built that would take the collection well into the twenty-first century. Over the next 130 years, the collection grew through the efforts of many more pillars of the Rutgers Department of Entomology and now has more than 200,000 insect specimens and continues to grow in breadth, purpose and importance. It is essentially a “library of biodiversity” of the state providing a view into New Jersey’s past and present natural history.

Rutgers alum David Moskowitz (GSNB ‘16), a naturalist who completed his doctoral degree in entomology at the School of Environmental and Biological Sciences, is a broadly trained ecologist and senior vice president for EcolSciences, Inc. During his graduate studies, Moskowitz was concerned about the state of the collection, which had suffered after many years of neglect. He took a deep dive into the history of the collection and went a step further. Upon seeing the risk that the collection could be lost to history, he took an active role to advocate for the measures needed to save and preserve it. He created a well-documented and illustrated overview of the collection’s history, including documenting the measures taken to save it—twice. The article was published in New Jersey Studies: An Interdisciplinary Journal, sponsored by Monmouth University, Rutgers University Libraries and the New Jersey Historical Commission.

In the article, Moskowitz states, “The collection also has a storied past and was rescued twice, once from fire in 1903 and then from neglect in 2003. The collection is a legacy to many great Rutgers entomologists and alumni, past and present, that helped build the collection; many who were, and are, renowned pillars in the field of entomology. Their work has had a lasting impact on insect classification, insect disease control, and agricultural production, not just in New Jersey, but across the world. The collection is irreplaceable and is a Rutgers University and a New Jersey treasure.”

“On the morning of April 23, 1903, a devastating fire broke out in New Jersey Hall. When it burned, it housed classrooms, offices, libraries, equipment, and important biological collections of the Agricultural Experiment Station, including a large portion of the Rutgers Insect Collection as well as plants and parasitic fungi. Despite the raging fire and heavy drenching by water, most of the insect collection was saved as students and faculty repeatedly ventured into the burning building to carry out what they could,” reports Moskowitz.

“Fast forward almost 100 years from the fire in New Jersey Hall to 2002, and once again the collection was threatened, this time not by fire, but by deplorable conditions. Through time and neglect J. B. Smith Hall had fallen into such a state of disrepair and was so unsafe that it was uncertain whether the collection could be removed from the building. Fortunately, in 2003, like in 1903, the collection was once again rescued. After being given a tour of the collection by entomology Professor Dr. Michael M. May in late 2002, the author alerted Senator Bob Smith, a Rutgers University graduate (M.S. Environmental Science 1973) of the situation. Senator Smith quickly began a series of discussions with then University President Richard McCormick in an effort to save the collection.

On October 14, 2003, the collection was moved from John B. Smith Hall to the new location in McLean Laboratories, an extensive and complicated effort coordinated by the collection curators, Dr. Frank Carle and Dr. Karl Kjer.

Most of the insect collection now housed in the basement of McLean Laboratories is contained within the original floor to ceiling green steel cabinets in plexiglass-topped steel drawers.

Moskowitz concluded, noting the significance of such a collection, “While some were new to science when they were discovered and described by the great New Jersey entomologists working at Rutgers, perhaps equally important is that, like the rapidly disappearing tropical rainforests, many of these species were collected in habitats in New Jersey that have been long ago lost to development. In this regard, they represent a “library of biodiversity” of the state, allowing a look backward at our insect fauna over time.”

Read the full article at: View of The Rutgers University Insect Collection (1888-2019): History of a New Jersey Treasure Twice Saved