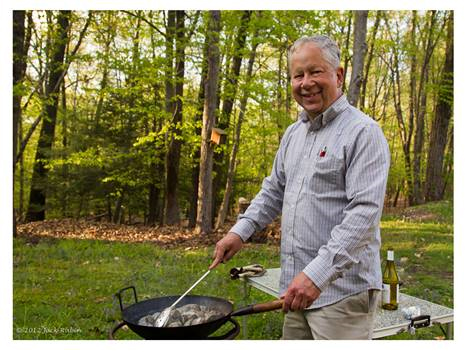 Ray Samulis was well-known for his love of cooking. Photo credit: Jack Rabin

Raymond J. “Ray” Samulis, 69, of Roebling, New Jersey, passed away on February 24. He served as agriculture and natural resource agent for Rutgers Cooperative Extension of Burlington County and retired in late 2017 after 41 years of service.

His primary responsibilities were vegetable crops, especially sweet corn; cranberries; and farm safety. Samulis served for 19 years on the Burlington County Agriculture Development Board, contributing to the preservation of more than 18,000 acres of county farmland, which made Burlington County a state leader and ranked one of the top 10 county-based Farmland Preservation programs in the nation.

In 2010, Samulis was granted funding for instituting the “AgrAbility” program, which assists farmers in dealing with disabilities that prevent them from completing their farming activities. He served as co-director of the Mid-Atlantic AgrAbility Project.

As an advocate for farm safety for much of his career, Samulis led several seminars on farm safety and was recognized by the Cranberry Growers Association for being a safety mentor for its industry.

He was known for his expertise with sweet corn and established one of the most comprehensive sweet corn programs that involved field research, comprehensive training seminars, and marketing research. Samulis also established field trials for Padron peppers in New Jersey and was heavily involved in helping cranberry, pumpkin and other vegetable growers with various field trials, playing a key role in making New Jersey a leading producer in the U.S. in several crops.

Originally from Barrington, NJ, in Camden County, Samulis did not grow up in an agricultural setting. However, sparked by an early interest, by ninth grade knew he wanted a career in agriculture, leading him to work at three different farms and as a landscaper. He went on to earn his bachelor of science in horticulture in 1973 from Delaware Valley College and a master of science in pomology in 1976 from Cornell University.

Samulis, who continued to be engaged with the agricultural community during his retirement, earned the respect and admiration of his colleagues and clientele, young and old alike. The outpouring of sentiments upon the announcement of his passing reflected on his integrity and warmth, his love of cooking and winemaking, and his ability to tell a captivating story. Below are a few of the many remarks his colleagues shared:

“He was the quintessential Extension colleague that everybody loved and appreciated. He made us all look better while keeping us smiling and well fed.”

“My family has farmed in Burlington County for generations and we thought Ray was a fantastic County Agent. He always treated the farmers with such high regard and admiration and helped us in so many ways.”

“Ray was still available early in the 2020 growing season to help out some of our northern NJ pumpkin growers with fertility issues. It gave me a chance to call/email him and catch up. He was still engaged with growers he likely never met just recently.”

“He had such a welcoming and engaging presence. He was kind and genuine and special. He always made you feel appreciated and welcomed.”

“Ray was one of the best. He had such a love of life and was always a pleasure to be around. Hard to believe that the heart could fail in anyone with such a good heart.”

“Blessings for his wife Karen and family that he dearly loved.”

Funeral Mass will be Friday, March 5 at 11 a.m. at St. Katharine Drexel Parish – St. Paul Church, Burlington. Visitation is Thursday from 6 p.m. to 8 p.m. and Friday from 9:30 a.m. until church departure at Koschek and Porter Funeral Directors, 1115 Hornberger Avenue, Roebling, NJ. Inurnment will be in Holy Assumption Cemetery, Roebling. Social distancing and gathering restrictions will be in effect. All visitors will be required to wear a facial covering and immediately return to their vehicles and leave the premises to allow for additional visitors to pay their final respects. Ray’s family is grateful for everyone’s cooperation.