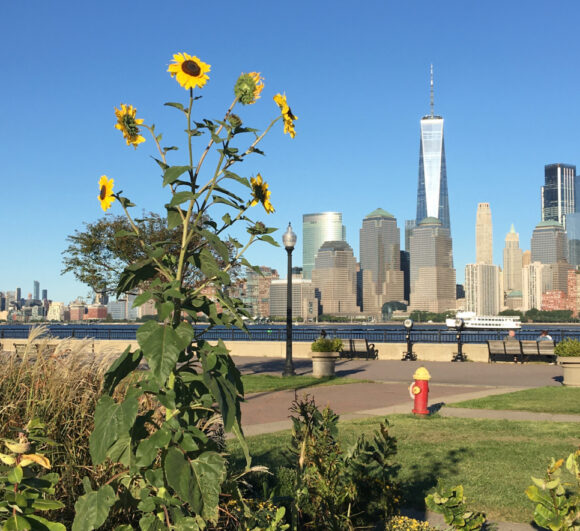 The financial district of New York City as seen from Liberty State Park in New Jersey during the COVID-19 pandemic. Photo: Pamela McElwee

The COVID-19 pandemic provides an opportunity to reset the global economy and reverse decades of ecosystem and species losses, but most countries are failing to invest in nature-related economic reforms or investments, according to a Rutgers-led paper.

Indeed, some countries, including the United States, Brazil and Australia, are back-tracking on existing laws and relaxing regulations and enforcement actions aimed at protecting nature, according to lead author Pamela McElwee, an associate professor in the Department of Human Ecology in the School of Environmental and Biological Sciences at Rutgers University–New Brunswick.

“Just last week at the United Nations, more than 60 heads of state spoke at a virtual summit and pledged their support to tackle the biodiversity crisis. But when we look at what countries are doing, either in their prior budget and policies or especially in their post-COVID planning and recovery packages, very few governments are putting their money where their mouths are,” McElwee said. “We still see huge amounts of financial support for harmful practices, such as subsidizing overfishing or fossil fuel production or building infrastructure that will harm ecological integrity. Only a small number of countries are addressing the biodiversity crisis in the serious manner it deserves.”

The paper, by economists, anthropologists and environmental scientists at many institutions on three continents, is published in the journal One Earth. It explores the changes in global economic systems – including incentives, regulations, fiscal policy and employment programs – that are necessary to shift away from activities that damage biodiversity and move toward those supporting ecosystem resilience.

Unless action is taken, around 1 million species face extinction, many within decades, and the global rate of species extinction will accelerate, according to the 2019 Global Assessment Report on Biodiversity and Ecosystem Services from the Intergovernmental Science-Policy Platform on Biodiversity and Ecosystem Services (IPBES). That report noted the extinction rate is “already at least tens to hundreds of times higher than it has averaged over the past 10 million years.” The authors of this new paper were all contributors to the 2019 IPBES report.

The new paper spells out the actions governments should be taking in their stimulus and recovery plans that would prioritize nature, provide immediate employment benefits and lead to longer-term transformations in the global economy. Examples include shifting from harmful fossil fuel subsidies to beneficial ones, including those that encourage environmentally friendly farming; carbon taxes that could support forest protection programs; and work programs that focus on ecological restoration and green infrastructure.

While many scientists and politicians have promoted a COVID-19 recovery that is low carbon, how to include biodiversity and ecosystems in economic plans has received much less attention. Discussions of nature-related actions have largely focused on closing wildlife markets as a potential source of novel viruses, expanding protected natural areas or reducing tropical deforestation. While these can be important, they do not necessarily address the root causes of ecological disruptions, the authors say.

A number of countries, including the United States and China, have allocated essentially zero stimulus funding to biodiversity or ecosystems. Only the European Union and member countries are making substantial financial investments in biodiversity for post-COVID planning. Other nations, including New Zealand, India and Pakistan, are proposing investments in nature-based jobs like ecological restoration, but at only modest levels.

“Governments are falling short of their stated promises and they need to do more – immediately,” McElwee said. “We will continue to monitor proposed recovery packages, stimulus measures and financial pledges for how they address the biodiversity crises going forward, particularly in light of the mega-summit on biodiversity to be held in China next May.”

Albert Ayeni is not a weak soul. Originally from Nigeria, the now retired Rutgers assistant teaching professor has a passion for hot peppers that rivals the most enthusiastic capsaicin connoisseurs. Watch our latest episode of Scarlet Stories to learn how Albert has eased the homesickness of many New Jersey residents through his hot pepper breeding program.