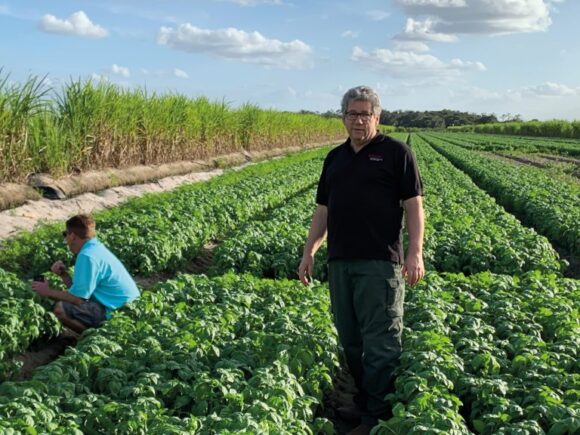 James Simon and Andy Wyenandt in a field with one of their basil varieties, ‘Rutgers Devotion DMR’, in Clewiston, Florida.

Sweet basil is among the most popular and economically important culinary herbs, but by 2010, US production began to feel the impact of a newly emerging destructive disease: basil downy mildew. At that time, no sweet basil varieties were resistant to basil downy mildew and growers began relying heavily on fungicide application to avoid devastating crop losses. Dr James Simon at Rutgers University had been researching basil for 25 years and was eager to tackle this problem. Eight years later, Dr Simon’s team is proud to have successfully developed 12 new downy mildew resistant varieties of sweet basil and two varieties resistant to fusarium wilt disease.

Basil, belonging to the genus Ocimum, is the most popular herb purchased in the US. It is used primarily as a culinary flavouring, but is also an ornamental plant and a scent additive for household products and cosmetics. The most familiar variety, sweet basil (Ocimum basilicum), is extremely important, generating over $300 million in annual sales in the US alone, while providing numerous jobs for growers, farm labourers, packers, shippers, distributors and retailers. Cultivating basil was a relatively straightforward and profitable process until the newly emergent disease, basil downy mildew, was reported for the first time in the US in 2009.

The devastating fungus-like pathogen emerged in Europe in 2001 and then spread to the US, where it obliterates crops and causes tens of millions of dollars in economic losses. As injured basil leaves are unmarketable, some growers’ entire crops were destroyed and many opted out of growing basil altogether.

Basil downy mildew (BDM) is dispersed by air-borne spores from infected leaves and seeds. Efforts to reduce its spread and severity had been thwarted by the absence of an effective seed treatment or chemical control method. Finding a viable, long-term, and economically sustainable solution to BDM has been a matter of great urgency for basil cultivators worldwide.

In 2010, Rutgers’ Dr James Simon was ideally positioned to tackle this devastating pathogen, having dedicated a large portion of his distinguished research career to studying basil genetics and breeding. Dr Simon knew that the key to fighting this intensely damaging blight was to develop genetic resistance to the disease. So, his research team began the hunt for a variety of sweet basil with natural genetic resistance to BDM. This approach formed the pillar of their plant breeding strategy, which was ultimately incorporated into their integrated pest management plan. 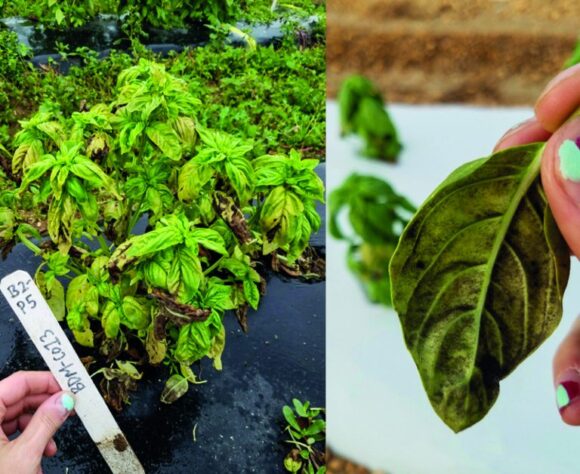 Earlier work by Dr Simon and his colleague, Dr Andy Wyenandt, the state’s vegetable crops extension specialist in plant pathology, had shown that all commercial sweet basil cultivars were highly susceptible to BDM. They also found that some exotic and ornamental basils appeared to be entirely immune to the disease. Several of these exotic basil varieties, different species from sweet basils, exhibited a range of tolerance levels and what appeared to be immunity to BDM. Unfortunately, the exotic species have a different number of chromosomes to sweet basil, making cross-breeding very difficult.

Dr Simon’s team spent several years manually cross-breeding hundreds of basil varieties from numerous species, with the goal of introducing only the BDM-resistant genes from the exotic basils into sweet basils. In doing so, they faced a significant challenge. The hybrid plants were sterile, and while they each had many of the visual characteristics of a sweet basil variety, they lacked the aroma and taste that consumers enjoy.

To facilitate a swift search for BDM-resistant basils, Dr Simon and his team developed a technique to rapidly screen plants for their response to the pathogen under controlled conditions, as well as larger field screens to confirm purported resistance. They discovered that plants respond to BDM at their earliest growth stage when their first seed leaves appear, thus indicating the plant’s susceptibility to the disease throughout its growth. Dr Simon’s team knew that they needed to establish extensive, multi-year testing, in order to identify new varieties of BDM-resistant basil and to develop a series of families and advanced breeding lines upon which to build.

The BDM pathogen develops particularly well in humid conditions when leaves are wet for an extended period. Dr Simon’s plan was to recreate the conditions that allow BDM to flourish, so as to accurately identify resistance. ‘In the absence of adequate disease pressure, susceptible plants could be mistakenly selected as resistant, substantially reducing the effectiveness of breeding strategies,’ Dr Simon explains.

This work was carried out in parallel with research examining the genetics of the plants, and screening of a global collection of over 100 basils. While Dr Simon, Dr Wyenandt and their PhD student Robert Pyne were conducting this genetic analysis and screening, another breakthrough occurred. The team’s reliable, fast screening method culminated in the identification of a resistant exotic variety from Zanzibar called ‘Mrihani’. Their results showed that this strange exotic basil, assumed to be of another species, actually turned out to be a variety of Ocimum basilicum, indicating that it could be a great candidate for traditional breeding.

‘I have always loved basil. It is a beautiful, attractive plant with unique chemistries that offered me many creative opportunities to ask unique genetic and biological questions. Basil is also important to so many people, cultures and agriculture industries, so my successful work with this plant gives me the opportunity to positively impact others.’ – Dr James Simon

Dr Simon and his team were surprised, as Mrihani neither looks nor tastes like sweet basil. With highly serrated leaves and a distinct liquorice flavour, Mrihani is not even close to being considered a sweet basil. However, as it is the same species as sweet basils, the team found that it readily reproduces with other sweet basil varieties to produce viable offspring. Thus, Mrihani was identified as a potential parent that could help the researchers develop BDM-resistant sweet basil varieties with a commercially acceptable flavour profile.

Over a period of two years, Dr Simon and his team crossed Mrihani plants with plants of another sweet basil variety, Rutgers University’s breeding line ‘SB22’, which had shown high susceptibility to BDM but resistance to fusarium wilt – a fungal disease that can negatively impact growers. The concept was to develop plants with high resistance to both BDM and fusarium wilt at the same time.

BDM resistance in Brassica – the family including broccoli, cabbage and turnips – had previously been attributed to a single gene, but it was still unknown whether the inheritance of BDM resistance in sweet basils would follow a similar pattern. Where multiple genes determine disease resistance, developing disease-resistant varieties becomes more complicated.

Dr Simon notes that this does not indicate that breeding reliably resistant sweet basil varieties is impossible, but rather that meticulous efforts are required to eliminate non-resistant genes and thus ‘fix’ the resistant trait in the plant. He suggests that simultaneously selectively breeding for desirable appearance and flavour traits will yield commercially acceptable sweet basil cultivars with BDM resistance.

The ability of basil breeders and researchers to respond rapidly to the emerging threat of BDM was significantly hindered by the lack of information about the genome structure and genetic diversity of sweet basils. Without this information, breeding efforts are more difficult and less effective. Understanding the genome of a species accelerates the development of new varieties as well as the utilisation of new gene-editing technologies. 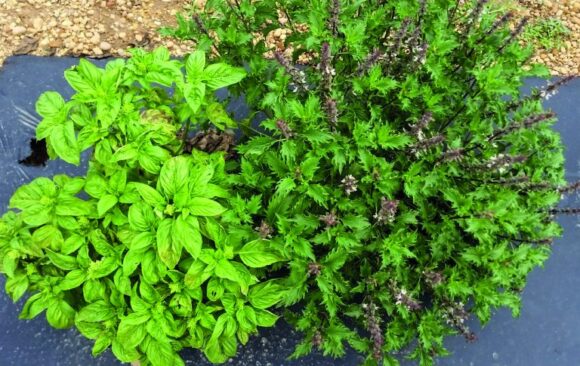 To enhance the breeding of their BDM-resistant lineages of sweet basil to facilitate efficient responses to future diseases, Dr Simon and his team took advantage of newer, more cost-effective genetic methods. They produced a genetic ‘map’ for sweet basil, which confirmed their results on BDM resistance inheritance from their earlier breeding studies. They also observed a high level of genetic diversity amongst sweet basil varieties, which accounts for their wide range of flavours and appearances. This work was spearheaded by Robert Pyne who conducted this basic research as part of his dissertation studies.

Back in 2011, the Rutgers researchers and their collaborators at Cornell University, the University of Massachusetts and the University of Florida began intensive efforts to provide a solution to BDM in sweet basil. Building on Dr Simon’s previous work on Mrihani and SB22, the team’s breeding program faced significant challenges in producing a BDM-resistant variety with a flavour and appearance suitable for commercialisation. However, Dr Simon’s extensive experience in developing new basil cultivars with unique aroma profiles provided a solid foundation for success.

In eight years, the breeding program produced and created 12 new sweet basil cultivars with BDM resistance. Of these, four have been commercialised by VDF Speciality Seeds, and provide growers with a substantial increase in BDM resistance. ‘These new BDM-resistant sweet basils offer high yielding varieties, even when BDM is present, and protect growers from the threat of complete crop loss under high disease pressure,’ says Dr Simon. Importantly, consumer taste tests of their new varieties have proven successful. 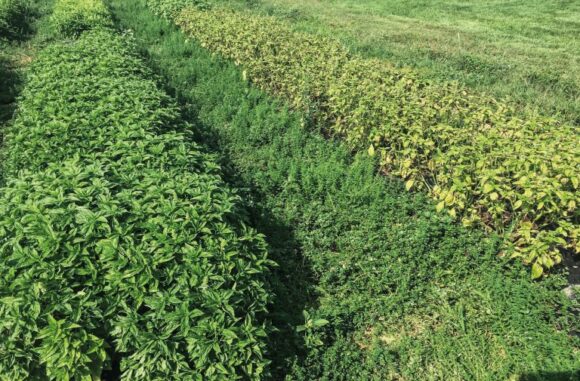 Dr Simon notes, however, that resistance is not equivalent to immunity. At high levels of disease pressure, BDM-resistant varieties can still exhibit symptoms. Commercial use of BDM-resistant basil varieties still requires growers to adhere to best management practices including the application of fungicides, but at a much lower rate. Growers who switched to BDM-resistant cultivars have been able to harvest later into the season than was previously possible, enhancing their yields and improving cost-effectiveness. Organic growers are reporting that they are now able to grow basil at long last without BDM issues.

Dr Simon believes that his team’s success was due in large part to their creativity and diversity – combining expertise from many scientific disciplines with the shared vision of finding a solution to the devastation caused by BDM. The team included lab scientists, farmers, growers, distributors, food processors and PhD students who were all dedicated, creative problem solvers. While their battle has been won, their war against BDM continues. Only this time, the team is better armed

Editor’s Note: this article was originally published in Scientia.