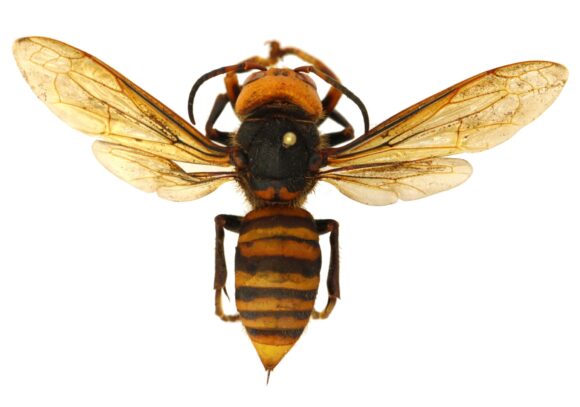 Although media reports have triggered panic over the Asian giant hornet (Vespa mandarinia), there are no reports this pest is present anywhere else in North America besides the Pacific Northwest. Rutgers Cooperative Extension (RCE) personnel in the Department of Agriculture and Natural Resources have received inquiries to identify hornets found by the public. In New Jersey, RCE county offices have not identified any submitted specimens to be the Asian Giant Hornet, which has only had confirmed sightings in Washington State and British Columbia, Canada.

“The species has not yet been detected this spring and we do not expect them on the East Coast,” said Dina M. Fonseca, director of the Center for Vector Biology and professor in the Department Entomology in the School of Environmental and Biological Sciences at Rutgers–New Brunswick. “We do not know how the species arrived in the United States but it is important to not overreact.”

Washington State University’s information on the Asian giant hornet confirmed the first U.S. sighting of this hornet in the wild. The first two specimens were found in Nanaimo and White Rock, British Columbia, Canada, in fall 2019.

The hornets were reported to be attacking colonies of honeybees in Washington State. The Asian Giant Hornet is known to aggressively attack honeybees and can destroy entire honeybee colonies. Washington State University recently published an extensive fact sheet with identification and guidance for the public. According to the WSU Pest Alert, Asian giant hornets are not generally aggressive towards people, but may sting when threatened.

“The Asian giant hornet is unlikely to be present in New Jersey,” Fonseca said. “While citizens in the Pacific Northwest can help detect any emerging hornets this spring, which is critical for its control, the indiscriminate killing of bees, wasps or other hornet lookalikes, would be detrimental because of beneficial roles these insects provide as plant pollinators and predators of agricultural pests.” 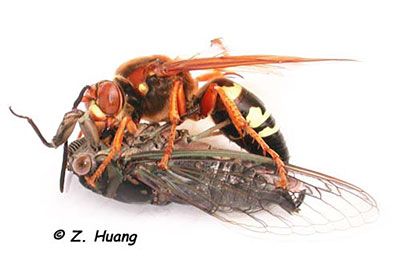 An insect that looks similar and can be confused for the Asian giant hornet is the Cicada killer wasp (Sphecius speciosus). These large solitary wasps are found throughout the U.S. and burrow holes in the soil. Even with their large size, dangerous appearance and “dive-bombing” habit, adult Cicada killer wasps rarely come in contact with people and rarely sting. The males of this species will make “dive-bombing” flight patterns but do not have a stinger, therefore an attack would not result in a sting. The female’s tubular egg-laying structure on the rear end can function as a very weak stinger. Her mild sting is similar to a slight pin scratch and is not considered by most people to be painful. Rutgers Cooperative Extension has more information on the Cicada Killer Wasp and other bees and wasps.

As more information emerges regarding the Asian giant hornet, it is best to pay attention to where this insect has been confirmed and how far it has spread. It is most likely that the Asian giant hornet would first spread and be reported in surrounding areas bordering Washington State and British Columbia, Canada, before any reports would occur on the East Coast. Knowing this information may help to calm fears when seeing other hornets and wasps. As always, take precautions and avoid contact with stinging insects.