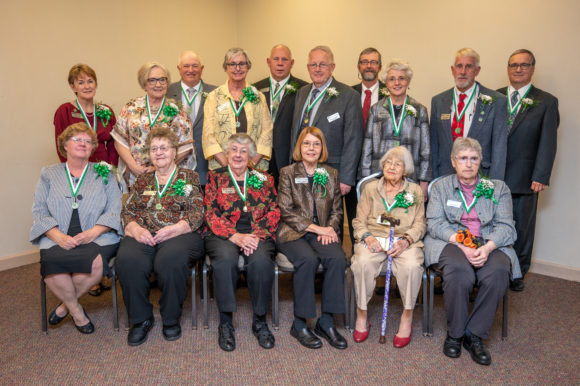 Frances L. Hagel of Mays Landing, New Jersey and Donna J. MacNeir of Ankeny, Iowa (formerly of New Jersey) were inducted into the National 4-H Hall of Fame in October for their lifetime achievements and contributions to 4-H.

Honored by the New Jersey 4-H Youth Development Program, Hagel and MacNeir were two of 16 people inducted during the ceremony at the National 4-H Conference Center in Chevy Chase, Maryland.

The National 4-H Hall of Fame honorees are nominated by their home states, National 4-H Council; the National Association of Extension 4-H Agents (NAE4-HA); or 4-H National Headquarters/National Institute of Food and Agriculture (NIFA), United States Department of Agriculture (USDA) based upon their exceptional leadership at the local, state, national and international levels.

There have been a number of individuals from New Jersey inducted into the National 4-H Hall of Fame. The past New Jersey Laureates include the following: 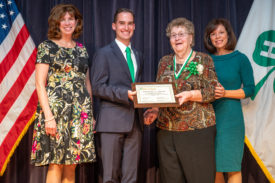 At the annual Atlantic County 4-H Fair in August of 1952, a young neighbor of Frances Hagel asked her to help mend a pair of haphazardly sewn pajamas that were due to be judged in a few hours. That was the start of 67 dedicated years as the Cologne Busy Bees 4-H Club volunteer leader. Through the years, her Cologne Busy Bees 4-H Club has specialized in the areas of sewing and cooking. Today, she has three children, seven grandchildren, and 10 great-grandchildren. The group of children Frances now mentors in your 4-H club includes two of her great-grandchildren.

Throughout Frances’ nearly seven decades as a 4-H leader, she has been involved in many aspects of 4-H at the county, state, regional, and national levels while supporting her husband in his Navy travel over the years. Frances began her involvement on the state level by driving the bus to 4-H Summer Camp so all Atlantic County 4-H youth had the opportunity to attend and she also stayed to chaperone. Mrs. Hagel would also rally members of the Atlantic County 4-H Leaders Association to participate in weekend clean-ups at 4-H Camp. For 13 years, Frances served on the New Jersey State Advisory Council and attended the Northeast Regional Leaders’ Forum for 10 years. When the Leaders’ Forum was held in New Jersey, she was on the planning committee two times. Frances was instrumental in helping to come up with the overall themes for the Forums. She personally made the “Jersey Fresh” costumes for Atlantic County volunteers to wear at the social, and she even convinced the committee members to dress as casino dealers the second time around. Frances lent her services for 20 years as a member of the planning committee for the State Fashion Show. In addition, Frances was involved in the 4-H Japanese Exchange Program nearly 30 years ago, and has kept in touch with the chaperone and participants. When the program was reintroduced to Atlantic County in the 1990’s Frances was instrumental in helping to get the program off the ground and running.

Over the years Frances has led hundreds of young people as “Queen Bee” and she has not lost her enthusiasm for teaching youth how to cook, sew, crochet, and preserve food. As a member of Mrs. Hagel’s club you are expected to participate in all aspects of 4-H, which she has helped to organize over the years, such as: Public Presentations, Favorite Food Show, and Join 4-H Open House. Mrs. Hagel encourages her club members to participate in community service events like Adopt-A-Road, Adopt-A-Family, and busing tables at the local fire company’s chicken barbeque. The members also participate in all of the Program’s fundraisers throughout the year, and they can also be seen modeling their 4-H projects at the Daughters of the American Revolution Fashion Show.

Frances is still an active member of the Atlantic County 4- H Leaders and 4-H Fair Associations. Mrs. Hagel is always the “life of the party” at meetings and events. She always has a smile on her face and is quick to remind everyone about the “good ole days” in the 4-H program. At the annual 4-H Fair Mrs. Hagel can be found helping with the chicken barbeque, crab cake dinner, manning the treasurer’s office, and helping with the baby parade. Often times Frances can be found dressing up as local celebrities, like “Sally Star,” to bring a smile to everyone. Mrs. Hagel’s involvement does not stop at the gates of the 4-H fairgrounds, she is a member of the Cologne Volunteer Fire Company’s Ladies Auxiliary and has served as President for 19 years. She is also a member of the Cologne Grange, the American Legion Auxiliary, volunteers at a local hospital, makes baptismal bibs for her church, and helps countless community members of whom she shared her talents and contributions of sewing projects and lap blankets.

“Frances is the epitome of the 4-H volunteer—a caring and supportive mentor to youth, helping them grow to be competent and contributing citizens,” said Debi Cole, former 4-H Agent for Rutgers Cooperative Extension of Atlantic County. Frances has always said “when you do something you love, you don’t keep track of how long you do it for,” she goes on to add that “when you do something you love it’s easy to share your talents with 4-H youth members To Make the Best Better.” 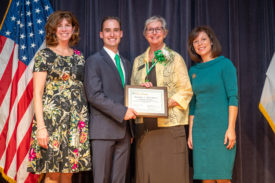 Donna MacNeir was born and raised in Camden County, New Jersey and her long-standing involvement with 4-H began in 1968 when she joined the Magnolia 4-H Busy Sewers. She participated in a wide variety of 4-H projects: public speaking, citizenship, clothing, gardening, leadership, achievement, and served as a camp counselor. In 1975, she was invited to speak before the New Jersey State Legislature. She was selected to the State 4-H Leaders Advisory Committee as a youth delegate. Donna was selected Camden County 4-H Queen. Represented New Jersey as a delegate to National 4- H Conference and earned a trip National 4-H Congress as the Leadership winner. It was Donna’s unrelenting passion that led her to pursue leadership opportunities within New Jersey 4-H and the National Association of Extension 4-H Agents.

Donna began her full-time career in 1979 as a 4-H Program Associate in Camden County, New Jersey. Her primary responsibilities included: working with the County Equine Leaders Advisory Committee; recruiting and training leaders; giving guidance to clubs and events; and creating an alumni association. Donna encouraged leaders to support summer and winter camping programs, school enrichment, awards, equine project/shows, animal projects/shows, events at County Fair, and more. It was her positive and effective leadership skills used for teambuilding and problem solving which focused on greater good that were valuable in her work with the Camden County 4-H Youth Development Program.

In 1983, Donna became Assistant Director at the NJ 4-H Camp located in Sussex County and shared her passion for helping youth learn outdoor life skills. She was in charge of rental group recruitment, facility maintenance, recruitment and training of summer camp staff, and more. Notable accomplishments during her time in this position included a financial gift ($250,000) for infrastructure upgrades at the NJ4-H Camp from the Dean of Cook College and another award to establish a fishing program. She was a certified Shooting Sports instructor who trained others for the role. Donna retired from Rutgers Cooperative Extension in 1999 and relocated to Iowa as the Manager of the Iowa 4-H Camping Center.

Donna served as the president elect (1998) and president (1999) of NAE4-HA. During her term as NAE4-HA President, Donna was futuristic and focused on the improving the leadership and management of the organization including professional development and advocacy, shorter board meetings, decreased annual meeting expenses, and increased use of technology. Two years after her term ended, Donna’s efforts came to fruition as NAE4-HA saw professional development opportunities emerge, professional advocacy swell and membership grow by nearly 1,000 Extension Professionals.

Donna has received several awards including the NAE4-HA Distinguished Service and Meritorious Service Awards; earned Volunteer of the Year in 1995; and received an award of appreciation from the Iowa National Guard Warrior.

Donna has been involved in a variety of service activities including a 4-H Seeing Eye puppy club leader in NJ; worked at the Iowa State Fair 4-H Horticulture Show 1999-2015; volunteers at Iowa Public TV; and assisted with the 2030 Strategic Plan for Polk County, Iowa. Donna recently retired from her position as a Planning Specialist with the Polk County, Iowa Sheriff’s Office.