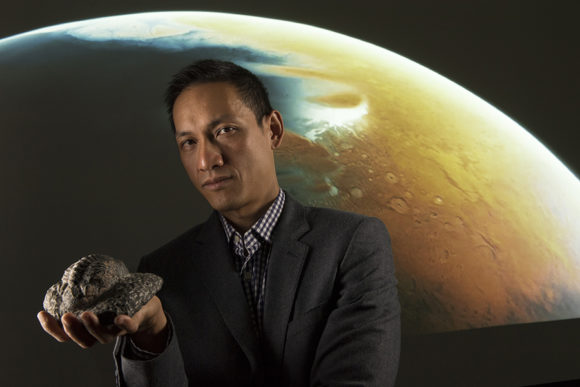 Nathan Yee, a professor of geomicrobiology and geochemistry and a co-investigator at Rutgers ENIGMA, co-created and teaches Rutgers’ first course on astrobiology. (In his hand is a fossilized trilobite, a hard-shelled, segmented arthropod that existed over 520 million years ago in Earth’s ancient seas.) Photo: Nick Romanenko/Rutgers University

People have spent centuries wondering whether life exists beyond Earth, but only recently have scientists developed the tools to find out.

One of them is Nathan Yee, a Rutgers University–New Brunswick professor of geomicrobiology and geochemistry and a co-investigator at Rutgers ENIGMA, a NASA-funded research team focused on discovering how proteins evolved to become the catalysts of life on Earth. Yee co-created and teaches Rutgers’ first course on astrobiology, an interdisciplinary field that seeks to understand whether life arose elsewhere and whether we can detect it.

Yee discussed his theories on extraterrestrial life, how NASA inspired him to create the astrobiology course and how Earth’s evolution holds the key to finding evidence of life on Mars and beyond.

Is it possible to prove whether aliens exist?

When I was a kid, I asked my science teacher if we were alone in the universe. My teacher said there may be no way of knowing, but I think that is changing.

In the past few decades, scientists have developed new tools to answer whether life exists on other planets or moons.  We are transforming this field of study from sci-fi to a hard science where we can test hypotheses with these tools. Two of the biggest game-changers are the Curiosity rover, which is analyzing rocks on Mars to seek evidence of past or current life, and the new space telescopes discovering strange new exoplanets that orbit other stars.

The next generation of telescopes will study the atmospheres of these planets. We know that most oxygen on Earth is made by photosynthetic bacteria. So, if we find oxygen in exoplanets, that might mean there had been plants and maybe even animals that breathe oxygen. None of this was possible when I was a kid.

How did working with NASA help you launch Rutgers’ new astrobiology course?

Since 2014, NASA has been inviting me to participate in workshops and panels involving special regions on Mars and the Mars 2020 mission. They wanted someone with expertise about microbes interacting with minerals and the biosignatures that ancient Earth microbes left behind in rocks after they died and went extinct, which happens to be my area of expertise at Rutgers’ Department of Earth and Planetary Sciences.

If we find signs of life on Mars, then it will be microbial. Curiosity’s mission is to determine whether Mars ever was, or is still, habitable to microbial life. The rover will collect samples and bring them back to Earth, so we can analyze Martian rocks to answer these questions.

To bring what I learned at these NASA panels back to Rutgers, I created a seminar on the topic of life on Mars. It was right when the film The Martian came out with Matt Damon, and it was really popular and revealed a great depth of student interest in these topics. Paul Falkowski, Distinguished Professor in the Department of Earth and Planetary Sciences and a principal investigator of ENIGMA, and I then proposed creating this course and an astrobiology minor that is still in the works.

The course, which is currently in its first semester at the School of Arts and Sciences, covers the origins of life on Earth and what this has to do with life on other planets.

In time, I hope the course and minor grow into undergraduate and graduate programs of astrobiology because I predict astrobiology will become one of the most important fields of science in the future.

What can Earth’s natural history teach us about the possibilities for extraterrestrial life?

Earth is 4.5 billion years old, yet one amazing discovery is that life evolved very quickly on Earth. In the beginning of Earth’s formation, the planet was really hot and liquid water wasn’t stable. Any water existed in the form of vapor. As it cooled, it rained and evaporated over and over, eventually leading to the formation of oceans. Once oceans were in place, life quickly emerged in the form of microorganisms.

These microbes figured out how to perform DNA replication, metabolism, how to breathe and eat in a short amount of time, and they were the dominant life for billions of years. Complex life, like animals and humans, did not evolve until recently. It’s shocking how long it took for intelligent life to form.

If I have to guess what extraterrestrial life would look like, it would probably be microbial life based on observations about the oldest and longest-surviving life-forms on Earth. Intelligent life is probably rare in our galaxy. I am skeptical about listening for communications and sending messages into space in search of other intelligent life because I think complex life capable of interpreting these signals is unlikely.

Is Mars our best bet for finding life-forms, or should we focus on other parts of the solar system or beyond?

Mars is a cold, dry planet, but it once was warm and wet, and what’s exciting is that we’ve recently discovered whiffs of methane, which on Earth is produced by microorganisms called methanogens. Scientists are curious as to whether such organisms exist on Mars, whether they migrated there via asteroids that came from Earth, whether methanogens have migrated to Mars and whether the planet’s subsurface could harbor microbial life today. This is one thing NASA hopes to find out during the 2020 mission.

Also, everywhere there is liquid water on Earth, we’ve found microbial life. We are smart enough to know that if a world has oceans, then we should look there for alien microbes. Europa, which is one of Jupiter’s moons, has what appears to be global oceans under sheets of ice. Saturn’s moon Enceladus has geysers and hot springs spewing from its south pole. That points to the possibility of volcanoes and hydrothermal vents, which on Earth harbor ancient life-forms and may have contributed to the origin of life here.

Now, do I think there’s going to be a whale on these moons? Likely not, but it is possible that alien microbes have evolved and continue to live there. That is the science we are in now.

Caption: Nathan Yee, a professor of geomicrobiology and geochemistry and a co-investigator at Rutgers ENIGMA, co-created and teaches Rutgers’ first course on astrobiology. (In his hand is a fossilized trilobite, a hard-shelled, segmented arthropod that existed over 520 million years ago in Earth’s ancient seas.) Photo: Nick Romanenko/Rutgers University