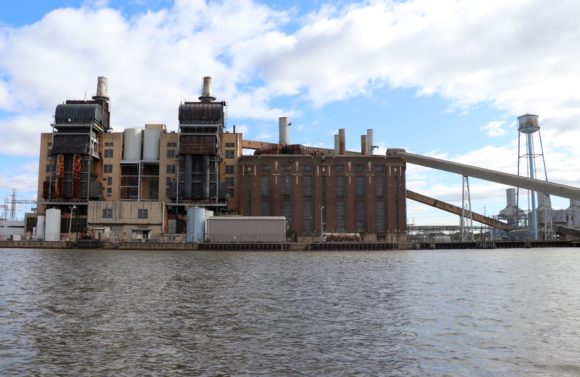 Decommissioned coal-fired energy plant on the banks of the Raritan River.

Environmental law is one of the most difficult areas of law for students. It involves a number of branches of law including trust law, corporate law, administrative law and especially constitutional law. Students learn a lot about basic government, how laws and regulations are made, the relationship between congress and the executive branch and how laws are implemented. 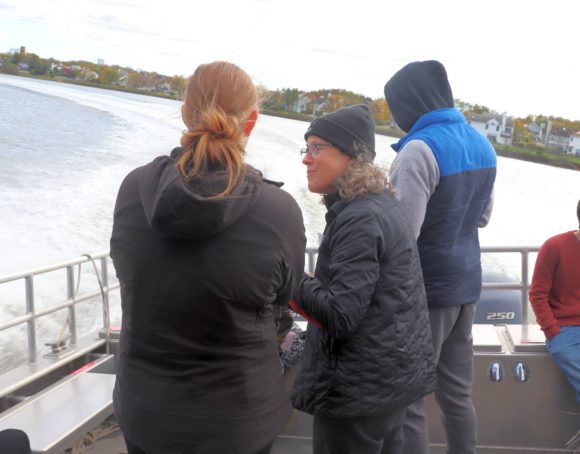 Professor Cymie Payne speaking with her environmental law students aboard the R/S Rutgers.

So on this brisk but sunny fall day did Human Ecology associate professor Cymie Payne’s Environmental Law and Policy students find themselves hitting the books? No, they found themselves on the R/V Rutgers for a trip up the Raritan River. Pleasure cruise? No. It was a class field trip. These students—who have been studying the Clean Water Act and Superfund sites—were there to learn first-hand about the river’s industrial and recreational history and to observe where regulation has resulted in recovery and where it has yet to achieve results. Their preparation included research on water pollution and what state and federal laws were passed in order to improve conditions.

“It’s important to understand how environmental law is structured, how it functions because these students will go into careers where they’ll be responsible for implementations,” says Cymie.  “You need to understand why the regulations are there and how they affect policy and action. Taking abstract concepts and law and the industrial processes that affect our environment. To get out onto the river to understand the impact of industry and the statutes we look at helps these students to take abstract concepts and make them real.” 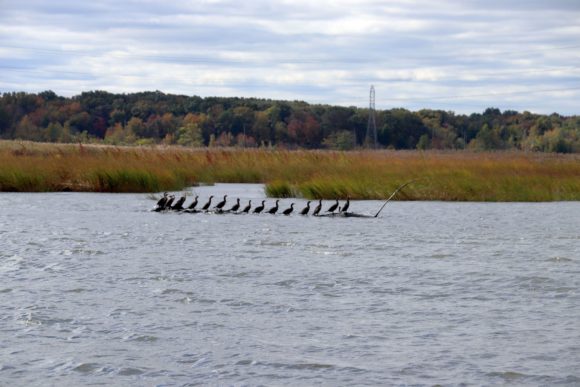 After a brief safety drill by captain Chip Haldeman, field notes were distributed so that students could keep track of their location on the Raritan, and to keep notes and observations on the different sites, wildlife and water quality. 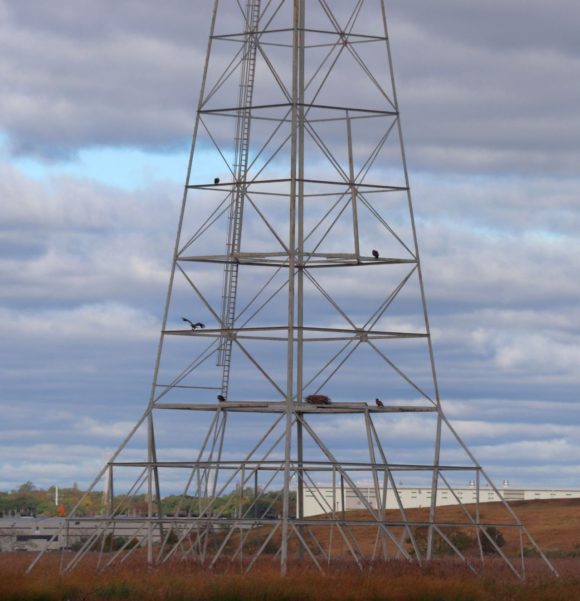 Bald eagles and their nests.

The Raritan River has been an important resource for people for hundreds of years, from the Lenape—who used it as a source of food and for transportation—to industrial uses including cooling and waste disposal. Today large stretches of the lower river have been abandoned by humans and reclaimed by nature. Landfills and abandoned industrial sites are neighbors with nesting waterfowl and large raptors hunting for their next meal.

The presence of wildlife—in this case birds such as bald eagles, cormorants, great blue herons and even a couple of king fishers—was immediately apparent. Professor Payne pointed out that the ban on the use of DDT was the reason for their recovery.

This wasn’t a bird-watching trip, however, and the R/S Rutgers quickly came to its first stop, a Superfund site called the Kin-buc Landfill. Between 1971 and 1976, Kin-Buc, Inc. operated the site as a State-approved landfill for industrial and municipal wastes, both solid and liquid. An estimated 70 million gallons of liquid wastes, including 3 million gallons of oily waste, and over 1 million tons of solid waste, were disposed of between 1973 and 1976. The EPA revoked the permit to operate, started clean up and the site was eventually capped. 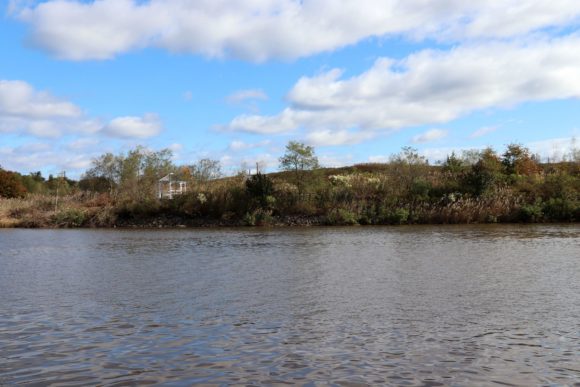 Also on the itinerary was the Sayre & Fisher Brick Works water tower in Sayreville and the now defunct JCP&L coal-fired power plant behemoth, both illustrating the use of the river for commercial transportation: coal came from Pennsylvania to the power plant and bricks from the Brick Works were transported to market. The power plant also pumped water in from the Raritan River for cooling equipment.

The final brownfields site was the highly contaminated National Lead pigment manufacturing site which is currently under remediation and subject to the hazardous materials cleanup law, the Comprehensive Environmental Response, Compensation, and Liability Act (CERCLA) known also as Superfund. 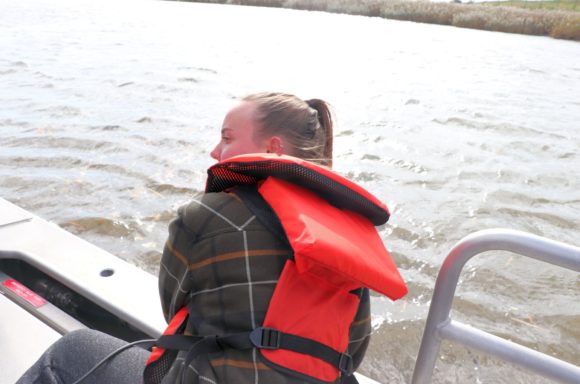 During the journey upstream, students also learned how to take water quality measures, focusing on salinity both upstream and downstream, connecting their previous research with hands-on data collection, while captain Haldeman spoke about the recent storms being the cause of increased upstream salinity.

Learning to navigate the winding path of environmental law is much like navigating the varied history of the Raritan River—from pristine natural resource to industrial wasteland and back. Hands-on learning is effective at helping students grasp what they’re taught. One student put it very simply by saying “This is one of the best things I’ve done at Rutgers!”