On November 8, the Rutgers Center for Lipid Research (RCLR) held its fifth annual symposium, with this year’s theme “Lipids in Health and Disease.” Chaired by George M. Carman, board of governors professor of food science and founding director of the RCLR, the symposium brought together an outstanding group of scientists outside and within the center’s family who shared their knowledge, results, and insights into how lipids are involved in health and disease. 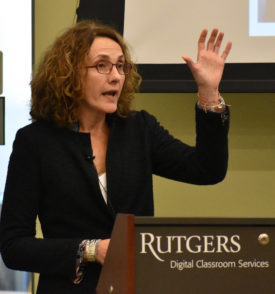 The symposium was held at the New Jersey Institute for Food, Nutrition, and Health on the Rutgers–New Brunswick campus. The speaker sessions covered a range of topics with an emphasis on lipoproteins.  Ira Goldberg (New York University) started the symposium with an outstanding presentation on the interplay between dietary triacylglycerol (TAG), TAG-rich lipoprotein metabolism, and insulin resistance.  Judith Storch (Rutgers) then spoke about the effects of obesity and high fat feeding on the secretion of intestinal chylomicrons into the bloodstream.  She was followed by Joseph Dixon (Rutgers), who showed remarkable live cell videos following individual lipoprotein-containing vesicles as they move quickly-and unexpectedly-within and out of macrophage cells.  The final talk of the morning session was by Isabel Medina Méndez (Institute of Marine Science, Vigo, Spain), who talked about the effects of a “Western” high fat high sucrose diet on the generation of inflammatory lipids and covalent protein modifications in adipose tissue, and their prevention by ingestion of diets high in marine fish oils.  Following the lunch and poster session (chaired by Gil-Soo Han and Olga Ilnytska), Harini Sampath (Rutgers) spoke about a novel role for intestine-derived lipids in regulating whole body energy balance and the gut microbiome.  She was followed by Chumin Lo (Ohio University) discussed the function of apo-IV in intestinal lipoprotein metabolism and food intake, highlighting the metabolic cross talk between intestine and brain. Finally, Loredana Quadro (Rutgers) presented data in support of the role of b-carotene metabolites in regulating lipoprotein assembly and secretion in placenta needed for developing tissues to acquire nutrients to sustain embryogenesis. 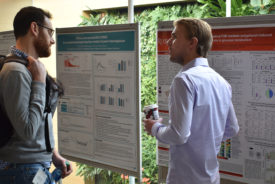 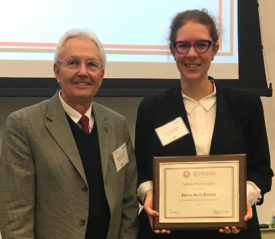 George Carman presented the Carman prize to Rutgers postdoctoral associate Joanna Kwiatek. The prize is awarded for outstanding research achievement in the area of lipid biochemistry.

The RCLR is a center of the New Jersey Institute for Food, Nutrition, and Health that promotes multidisciplinary research on the biochemical, biophysical, cellular and molecular mechanisms involved in lipid metabolism, and extends this information to the underpinnings of lipid-based diseases such as obesity, lipodystrophy, diabetes, and heart disease. RCLR fosters interaction among faculty, postdoctoral associates, and students across the university. For more information on the RCLR, visit rclr.rutgers.edu.

Program booklet for Lipids in Health and Disease Symposium, November 8, 2019.