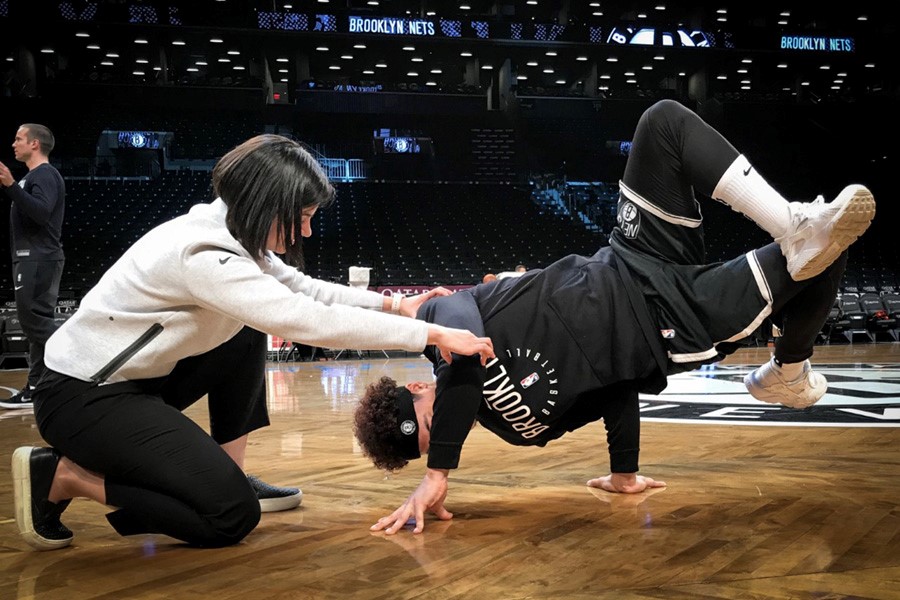 “This is my dream job,” said Piloto, who is in her fourth season training the stars of the Christmas Spectacular. The 27-year-old is also head athletic trainer for the entertainment teams that perform at Brooklyn Nets basketball games. “I definitely found a career that suits me really well,” she said.

The New Jersey native got her start as a student athletic trainer for the Scarlet Knights football team while earning a bachelor of science degree in kinesiology and exercise science at Rutgers University-New Brunswick.

In her sophomore year, Piloto’s advisor told her about an opportunity to work under the Rutgers Scarlet Knights athletic training staff. “I jumped at it,” the 2014 Rutgers graduate recalled.

From day one, Piloto worked in the athletic training room, taping and stretching players, and applying heat and cold to help them prepare for and recover after sessions. She shadowed the team doctor and took notes on player evaluations, learning how to better understand the mechanics of an injury.

“This was the internship model of learning: it was very much an out-of-textbook, out-of-classroom learning experience, to gain practical knowledge about the field and learn how to apply the techniques in real on- and off-field situations,” she said.

At just 5 feet tall and 125 pounds, Piloto worked with plenty of players who were a foot or more taller than her, and some more than twice her weight. “Linemen are the really big guys,” she said. Working with the players “was intimidating at first, but you quickly become part of the team,” she said.

Beginning in her junior year, Piloto also prepared the field for practices, making sure the turf was a safe temperature and that ample water was available to players. During practices and games, she was assigned a position group and tracked those players’ water intake and kept an eye out for signs that a player might be in distress.

“I’d rather a player miss one practice than be out of everything for two weeks with an injury,” Piloto said. 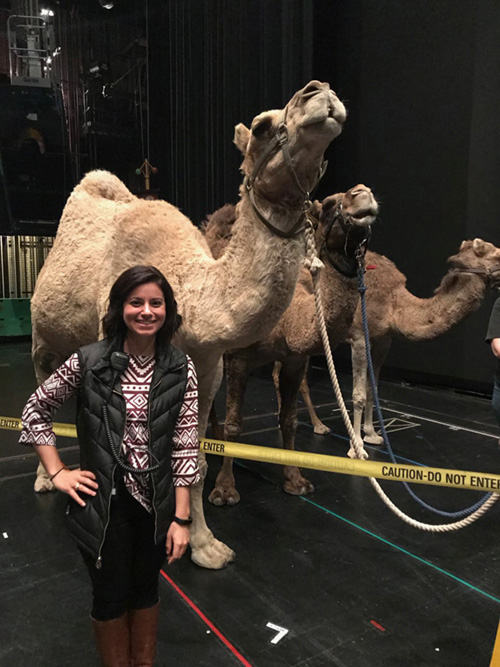 She worked all home games and took turns traveling to away games. At those, student athletic trainers would turn a hotel ballroom into a training room, Piloto recalled. She worked 20 hours a week during the Scarlet Knights season, and half that in the off-season.

Piloto spent her childhood playing outdoor games with two brothers. She became involved in a variety of sports, and dance became her passion.

Her father’s career took the family to Pennsylvania, Connecticut, and then Ohio. At her high school in Ohio, Piloto took a sports medicine course, learning anatomy, physiology, and basic injury management. “I absolutely fell in love with sports medicine,” she said.

After Piloto finished her master of science degree in athletic training at Texas A&M University, Rutgers University Athletics offered her a job as an assistant trainer for the Scarlet Knights. She was happily prepared to accept the job until the call came from the Madison Square Garden Company offering her the job as assistant athletic trainer to Radio City Rockettes.

“I knew I wanted to get into performing arts, but there aren’t a lot of jobs,” she said. “I never imagined it would happen so fast.”

Piloto regularly attends area dance competitions to talk about injury prevention techniques and to do evaluations. “Dancers are the underserved population of sports,” she said.

She is still close with the Scarlet Knights athletic trainers and former players, and works each summer at football training camps at Rutgers for high school athletes. “We’re definitely like a family,” Piloto said.

In January, the Chester resident will wed Jason Adams, whom she met at Rutgers. They did not, as one might assume, meet on the football field. “He played Rutgers hockey, a sport I never covered!” she said with a laugh.

Editor’s Note: This story first appeared on Rutgers Today. In honor of the 150th anniversary of the birth of college football, Rutgers Today is sharing stories about how involvement with the game has shaped the lives of our students in different ways.