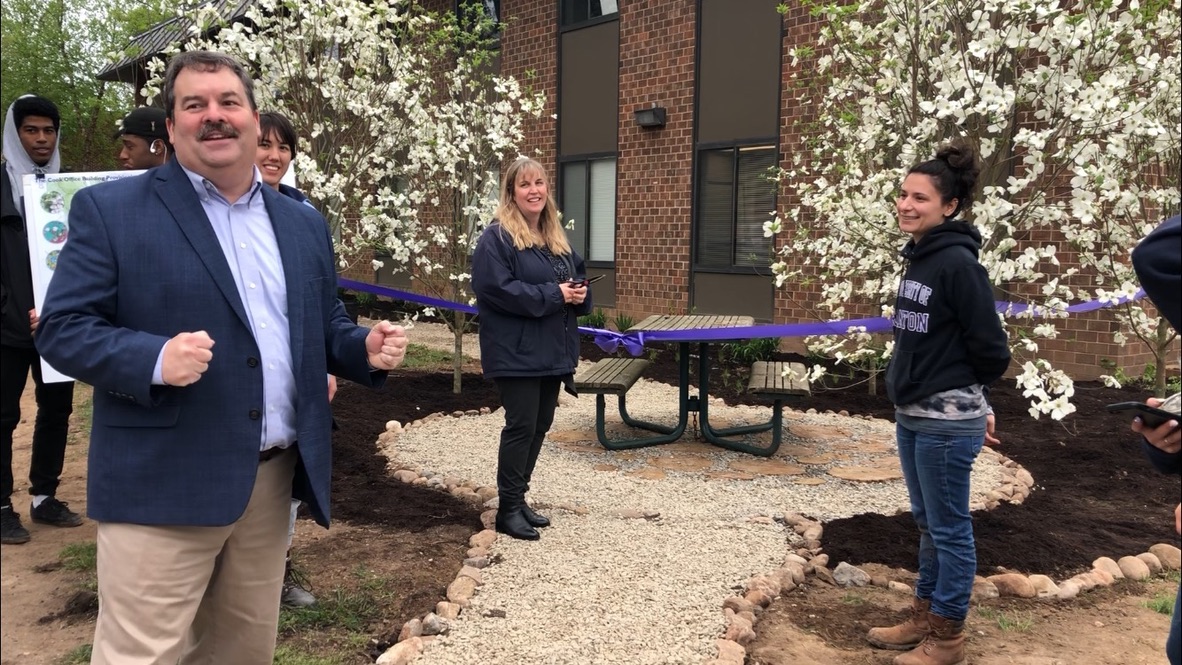 Professor William Hallman, chair of the Department of Human Ecology, speaks during the ribbon cutting for the Provisioning Garden at the Cook Office Building on the Cook Campus.

Students returning to the George H. Cook Campus this fall were greeted with a new garden installed at the Cook Office Building (COB) across from the popular Skelly Field on Dudley Road.

The Provisioning Garden showcases plants that contribute provisioning services to assist humans and wildlife in some way—as food, fuel, fiber, medicine, and habitat. The provisioning theme, a term explained in the UN’s Ecosystems and Human Well-being: A Framework for Assessment (2003), reflects the missions of the two departments of Human Ecology and Agricultural, Food, and Resource Economics, occupants of COB and both of which study the human dimensions of environmental problems and challenges. 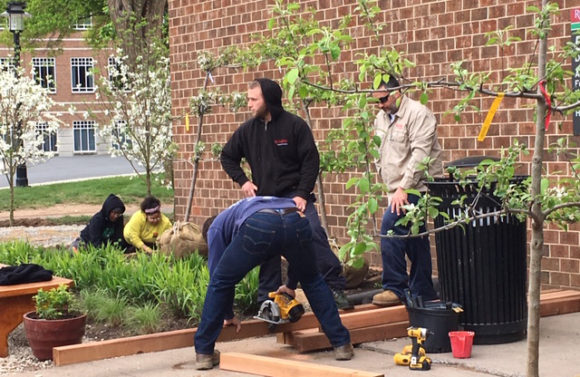 SEBS facilities and students making a raised planter for espaliered apple trees in the provisioning garden at the COB.

During the spring semester, students enrolled in the Planting Design course taught by Holly Nelson, associate professor, and Christina Kaunzinger, assistant research professor, in the Department of Landscape Architecture, worked in pairs to create designs that were displayed in the COB corridors.  DAFRE and Human Ecology voted for their favorite project, and in late April, the class installed the winning design. Several other professors, COB department chairs, SEBS Facilities, The Office of Planning and Budgets, Clifton Landscape and National Guardsmen passing by one day, all provided assistance with the planting.

“In collaboration with SEBS Facilities, a drywell was constructed under the new picnic terrace next to the building to capture and infiltrate stormwater.”

“You can’t see the drywell, but puddles have disappeared into it,” she Nelson. “New planting beds alongside the building create office privacy, and some hazardous trees were removed and repurposed in the design, while landscaped benches create opportunities to hang out in front of the building.” 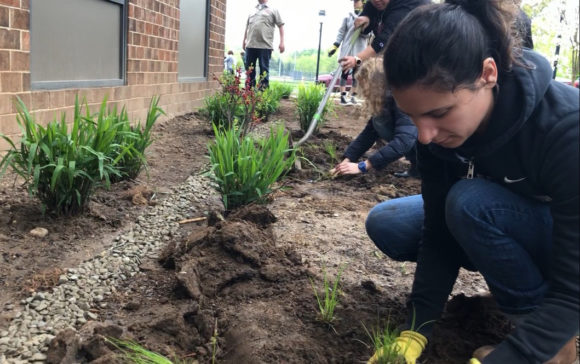 This themed planting design also includes trees that provide provisioning services, added Nelson, who provided a mini lesson on the purpose of the particular plantings that comprise this latest sustainable and living laboratory on the Cook Campus.

Black Birch
A small grove of Black Birch (also called Sweet Birch) sits adjacent to the front lawn. Birch trees are used for lumber and fuel, and Birch beer and syrups can be created from the sap of Black Birch (Betula lenta). Birch trees also have medicinal uses, as salicylic acid is a medicinal extract found in the bark and twigs. In addition, birch tree bark can be boiled to create a remedy for dandruff and other skin-care blemishes. 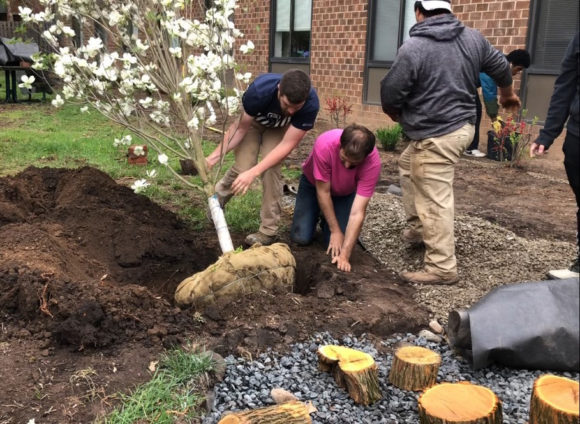 Planting a dogwood in the garden.

Dogwoods
The Constellation Dogwood Grove in front of the building is dedicated to George F. Clark, recently retired professor in the Department of Human Ecology, who held student meetings at a picnic table outside the building. The Constellation Dogwood was developed by renowned Rutgers breeder Elwin Orton, professor emeritus of plant biology and pathology, who crossed our native Dogwood (Cornus florida) and the Japanese Dogwood (Cornus kousa) to create resistance to dogwood anthracnose, a fungal disease that decimated our native Dogwood population. The dogwood has several human uses.  Eastern American tribes would use Dogwood blooms as a signal to plant corn. Dogwood tree bark was used for teas to help reduce fever (this remedy was often used by native Americans but also during the Civil War when ports were blockaded and medicine used to treat malaria was no longer available, the tea remedy was an alternative to treat this deadly disease). In addition to providing shelter for wildlife, Dogwood seeds are also a food source for birds and animals.

Shrubs
Berry-bearing shrubs, like the Winterberry Hollies (Ilex verticillata), also provide habitat and a food source for birds, small animals, and some insects. In the past, Native Americans used Winterberry Holly berries for medicinal purposes. Other edible treats planted throughout the garden are Low Bush Blueberries (Vaccinium angustifolium) and Apple trees. Four beautiful, fruit yielding, espaliered Apple trees frame the entrance to Cook Office Building, and Blueberries flank benches along the path through the garden. 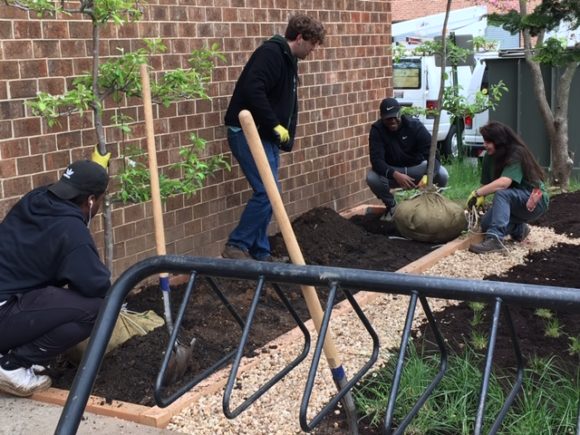 Osage Orange
Two Osage Orange trees (Maclura pomifera) were removed from the cross-campus sidewalk for safety reasons. Their trunks were sliced cross-sectionally by Jason Grabosky, professor in Urban Forestry, to create tree ‘cookies,’ wooden discs that were repurposed as pavers in the round picnic terrace in the George F. Clark Dogwood Grove to recall the trees themselves as well as the farm cultural landscape at SEBS. Osage Orange is an exceptionally hard wood that is very difficult to cut. It was once used by Osage Indian tribes to make bows (hence, its name), but its wood is so dense that it dulls cutting knives. Although it is an excellent wood for exterior usage because it resists rot, it is not found often in the trade because it is so hard to work. Before the invention of barbed wire, living agricultural fences were created with Osage Orange hedgerows. Planted closely together, they were pruned to be bushy, thick, and high enough ‘fence’ that a horse could not jump it, and it would stop a bull. Osage Orange wood naturally produces a vibrant orange pigment that can be used to create dyes. Most people know of the tree by its neon green softball-sized fruit with skin textured like brains.

Pollinator Meadow
The front lawn of the COB is framed by a pollinator meadow and a Black Birch (or Sweet Birch) grove. The meadow’s perennial plants (such as Bee Balm (Monarda), Joe-Pye Weed (Eutrochium purpureum) and Purple Coneflower (Echinacea)) attract bees and butterflies. Insects visiting the pollinator meadow will pollinate the edible fruits. The meadow area has lain under a solar blanket this summer, a non-chemical method for controlling weed seed using the high temperatures created by covering it with black plastic.  This area was disturbed by construction vehicles building IFNH. Landscape architecture students de-compacted the soil and amended it with leaf compost.