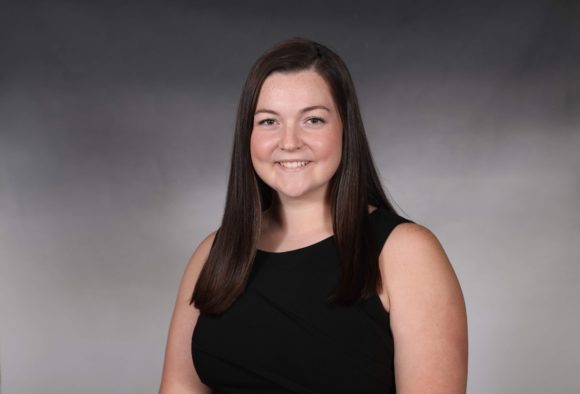 Erin O’Neill is a self-described ‘introvert,’ yet in 2018 she won the Spirit of Rutgers Award—an award that recognizes an individual that represents the values, traditions, and mission of Rutgers through their outstanding engagement, enthusiasm, spirit, and commitment to the campus community. Erin has participated in the RU Dance Marathon every year—this year as a captain and emcee, taught a FIGS course to freshman and was inspired by Superstorm Sandy’s destruction of her high school to focus her sights on meteorology. This year, this Scarlet Knight was named one of the Meteorology Students of the Year!

Congratulations Erin, SEBS Class of 2019, and thank you for sharing your story with the SEBS/NJAES Newsroom.

You were one of the winners of the 2018 Spirit of Rutgers Award. What does that specific award represent for you? 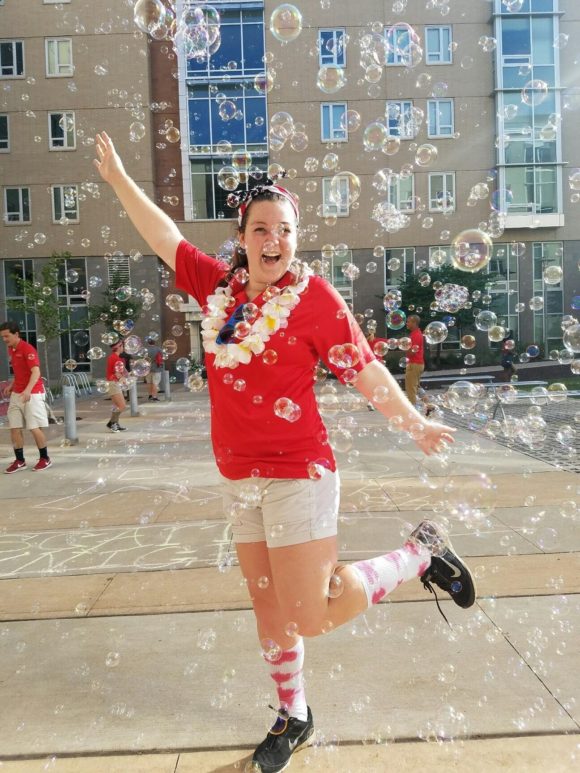 I was delighted to receive such an honor. I was a timid freshman moving into Perry Residence Hall on Cook Campus in the fall of 2015 My transition to the university from my high school class of 60-students was not the easiest. I was faced with a challenge of finding my second home on the Banks. I dove into countless organizations, attended sporting events, traditional school events, and more over my first year. I felt as if I was living the true Scarlet Knight lifestyle. I was happy and excited that I made myself at home at Rutgers.

I am passionate about the organizations I have joined and continue to represent Rutgers in various capacities such as a Scarlet Ambassador, past FIGS Peer Instructor, past Orientation Leader, and more! I love to share my story and experience at Rutgers with others and to keep the history and tradition of the University alive. I am grateful for those who came before me, and hope my actions positively impact the University for years to come. Being the recipient of the award was a humbling honor. As I tell all of my tour attendees, though my time on the banks is coming to an end, I am proud my alma mater taught me what it meant to be a proud Scarlet Knight.

Your school was flooded out by Sandy. What about this event triggered your interest in Meteorology?

I’ve always been interested in weather and observed it growing up. I’m good at math and science and always loved making connections from the classroom to the real world. Sandy solidified all of that for me.

Thinking back to Naval Science class in late October 2012, I remember my instructor informing the class there was a hurricane headed towards New Jersey. To my shock, I had dropped the ball on keeping up with the weather events happening for a few days and I was behind on the big one.

The following day, I spent my entire day on North Beach of Sandy Hook building a sand structure of our AutoCAD designed vessel—a project we’d been working on in class. As we rushed back to make the final bell, my mom was waiting in the parking lot to head up to Connecticut for the weekend to see my sister’s field hockey tournament. Little did I know at the time, that was the last time for the year I would step foot on the Marine Academy of Science and Technology (MAST) campus on Sandy Hook.

As the coverage increased for the storm, I was glued to Twitter, Facebook, news channels, and more to get the latest updates. The seriousness and the warnings heightened to a level which I’ll never forget. Towns across the highway from my home were being evacuated, my classmates were boarding their homes, and packing for an unknown return.

We returned home from Connecticut late that weekend and the hurricane hit. The winds increased and many frightening gusts hit the side of our house in Hazlet—we had 3 massive trees on our property! Suddenly there was a loud sound and the power was gone. There began the 2.5 weeks without power in the house. I calmed myself, and decided sleep would be best. What I woke up to the next morning was everything I thought could never happen to my hometown, my county. It seemed surreal, but it was reality.

The questions turned from deciding if the meteorologists were wrong to ‘how did everyone make it through the storm, how bad is the damage, do you have power or running water?’ The world had stopped. A town less than a half mile away had extreme damage. Power was out everywhere and school was closed with no opening in site. Eventually we found out that MAST would not be returning to Sandy Hook as the infrastructure and nearly everything in it was unfit for return. It was announced that school would resume at St. Joe’s in Keyport, a closed elementary school.

We had no cafeteria but gained a gymnasium. The classrooms were built for elementary, not high school students. We had no books or supplies. Our AutoCAD class didn’t have computers so there was no continuing the 3D computer drawing lessons. All was weird. It was the new normal.

I was already interested in meteorology, when Sandy hit. The storm confirmed for me that meteorology was what i wanted to study in college. I was puzzled, yet intrigued how a force of nature could completely change my life. I watched the devastation. All I could think was how and why? I wanted to understand superstorm Sandy in its entirety.

Realizing the weather impacts almost everything in our lives motivated me to learn more about the weather. I also noticed that communication of the conditions was not great during Sandy and it was evident in how people went about preparing. I was curious as to how communicating the storm via media outlets such like Twitter and Facebook became the first source of media for the storm for me.

What do you find the most interesting about meteorology?

Meteorology is a constant puzzle and an educated guessing game. A game that one can constantly be challenged by and continue to learn from. The predicting aspect affects nearly everything. Weather is a part of everyone’s lives and by studying it you can use your knowledge to help others make decisions, saving lives and protecting property. It is the answer that everyone is looking for.

What do you consider the most challenging thing about college or the major you are pursuing?

The most challenging part is the math and physics behind meteorology. Even though it is a challenge, it is what I am passionate about and enjoy learning. The challenge comes at learning and figuring out problems at a smaller scale in order to apply them to a greater one.

Were there any other challenges you overcame to get to where you are now? 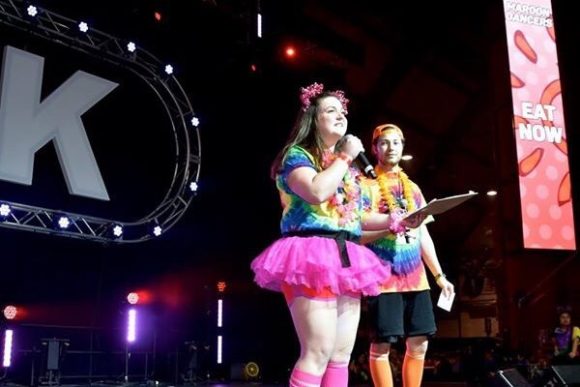 I’m an introvert and I’ve had to find ways to overcome that. I also had to learn how to manage my time. Running from club meeting to club meeting and taking over 16 credits each semester begins to add up. Making every night a late night is not feasible. Learning to manage my time allowed me to get involved in many organizations at the same time while balancing a full course load and actually enjoying myself.

I taught a First Year Interest Group Seminar (FIGS). FIGS is a course that first semester freshman take. It’s taught by upper level students. Because meteorology had never been focused on in this course, I was able to build the course from ground up. In this ten week section I used meteorology to teach the students about Rutgers. For example, in meteorology you use a lot of tools and resources, and as a student you’re going to use a lot of resources as well.

I was able to participate in and enjoy the Rutgers University Dance Marathon. The Marathon raises money and awareness for Embrace Kids Foundation which is an organization right in New Brunswick that aids child patients and their families with non-medical needs. It is a fabulous organization and near and dear to my heart. I’ve been involved in since my freshman year. This year I was a captain, helping to teach the line on stage and even took on a new role as emcee, a big step out of my comfort zone.

How do you feel about being named one of the Meteorology Students of the Year?

Being named Meteorology Student of the Year is an absolute honor. Our program brings out the best and the brightest and to be named Student of the Year is humbling. I was very excited when I received news from the department. I have always been very involved in the department since my first week on campus. I am a Class of 2019 Representative on the Meteorology Club Eboard and now serve as President. I attended the AMS Conference, working to build programs in the department to bridge the gap between undergrad and industry. I take pride in our program and have watched many well-deserving recipients in the past and am honored to now be among this group of individuals.

What are your plans after graduation?

I have recently accepted a full time position for after graduation with WeatherWorks in Hackettstown, New Jersey working for them as an operational meteorologist. I learned a lot about emergency management from the Sandy experience. I’m interested in focusing on decision support services—where meteorologists are called on for advice, rather than in broadcasting. So, I am very excited to start this position and to be able to live out my passion for forecasting the weather while continuing to learn in a great environment. I look forward to getting started shortly after graduation!