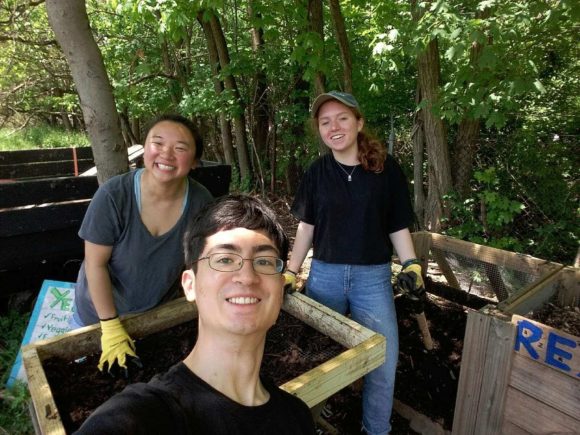 Sieving out the finished compost from the third compost bin to make more room in the first bin for additional food scraps. The crew filled up four wheelbarrows of finished compost and set it aside in a pile so it could cure/mature for garden use. From left to right: Dorothy Lee, Colin Marx, Brigitte Schackerman. Photo: Colin Marx.

Dorothy Lee is an outstanding student with a tremendous sense of social and societal responsibility, especially in the areas of social and environmental sustainability. Recognizing that food waste is one of the most important contributors to food insecurity and to the emission of greenhouse gases, thus climate warming, Dorothy founded the Compost Club, which has been very effective not only at collecting food scraps but also of publicizing important issues surrounding food waste. More recently, as a leading member of Students for Environmental Awareness, Dorothy led the campaign within the organization titled “Students of Color for Environmental Justice” (SOCEJ), which hosted two climate justice related events and helped plan another in April.

Dorothy’s began her Rutgers journey as a biotechnology major. A 2nd semester course in human ecology led by associate teaching professor George Clark and then a fall semester course in environmental design with professor Laura Lawson changed everything. She had an epiphany and realized that she wanted to learn more about our ecosystems and how we and other organisms interact with and affect it.

During her first year, Dorothy also participated in one-week internship experience at Key Foods grocery store in New Brunswick as part of a Douglass program externship that pairs students with non-profits, businesses and organizations. While there, she realized they needed to compost the food scraps from their juice bar. This made her wonder what Rutgers did for food waste management.

“Growing up in an Asian household, I was brought up to not waste anything,” she said. “Food was a major part of my life as well so I always finished my meals with a clean plate.” In the Rutgers dining halls, she was shocked to see people place whole plates of food on the conveyor belt, not worrying about it after it left their hands. So she reached out to many faculty members, which lead her to Laura Lawson who encouraged her to create the Compost Club. Lawson, who became the club’s advisor, noted that past students had expressed an interest in compost.

From then on, Dorothy was inspired to discover what dining services did to the wasted food and increase awareness of this issue.

Dorothy and other members of the club built three compost bins behind the Cook Organic Gardens (by the Ecology building) in the Spring of 2017. They encourage and train students to collect their compostable items to add to the bins. Approximately seven to fifteen members monitor the bins, spread awareness about composting, and educate others to reduce food waste by understanding the origins of their food. 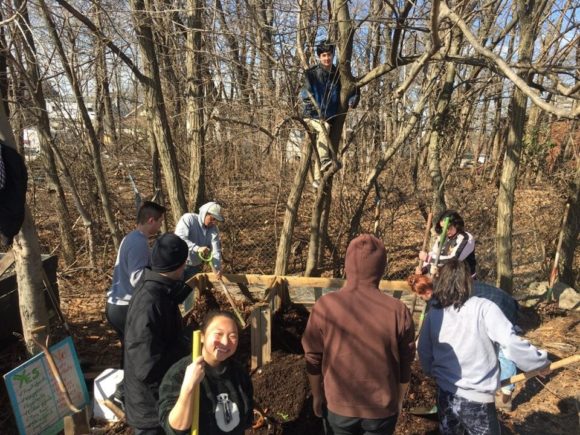 Working on the compost bins. Dorothy Lee in the foreground and Colin Marx in the tree. Photo: Katelyn Jo.

On weekends, they turn the compost piles, show users how to maintain the bins, and explain the ecological processes that are involved in compost decomposition. The finished compost is available to all, local community and campus gardeners alike. Not only have the bins provided finished compost to gardeners, but since Fall 2017, it has also been incorporated into a Rutgers course, “Sustainability: Tackling Food Waste,” to educate students about the importance of composting and to teach them how to do it. The bins have become a living classroom!

Wanting to make composting more accessible to students on other campuses, this spring semester, they started a food scrap collection service in front of the Hillel building on the College Ave. Campus, encouraging students to divert their food scraps from going to landfills. So far, about 30-35 different people drop off their scraps each week or give them to club members! They have collected 500+ pounds from March to May, not including what individuals and Seedburger (a plant-based restaurant on Easton Avenue) bring to the bins each week.

The Club also has planned outreach events with the Harmony Family Success Center, the New Brunswick Public Library, Elijah’s Promise, and the New Brunswick Community Garden, involving and volunteering in the New Brunswick community and talking about composting and the importance of our soils. Guest speakers have been invited to talk about their school’s composting systems and types of composting practices, and field trips to the EcoComplex, Fernbrook Farms and Freshkills Park—a closed landfill on Staten Island—has taught the members about composting initiatives for NYC residents and composting on landfills and farms.

Dorothy’s leadership skills extend to other areas as well.

Dorothy is a member of the Students for Environmental Awareness and, along with an environmental policy student, Emily Cheng, created the “Students of Color for Environmental Justice” (SOCEJ) campaign to address the need to have more conversations about environmental and climate justice at Rutgers. “It’s an ongoing challenge to talk with people who do not take me seriously because of my gender, race, and/or age,” She said. “However, having a strong support system through friends, fellow students and professors carries me on and inspires me.”

During the week of April 15 SOCEJ held a variety of events, including a panel discussion, a skills sharing workshop, and helping with a Green New Deal town hall meeting.

During the panel discussions, members of the Rutgers and surrounding communities spoke about their knowledge and/or experiences with environmental justice focusing on Rutgers students who might otherwise not learn about these issue in their classroom.

The skill sharing workshop was aimed towards students of color who would like to gain more confidence and knowledge on how to best fight for justice issues. It focused on advocacy (public and policy engagement), environmental justice education/communication, and grassroots campaign building. Following the workshop a social networking event was held for people of color to connect and decompress together. 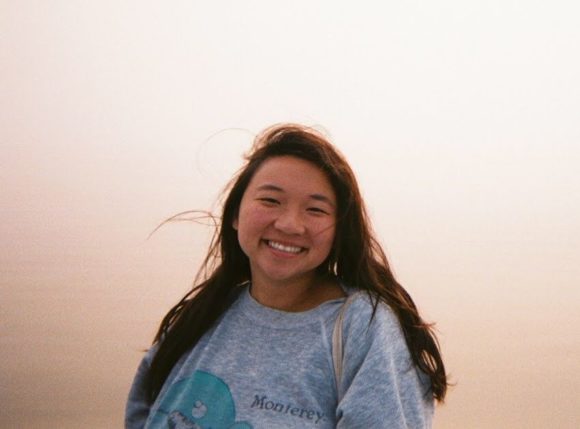 Being a hands-on kind of person, Dorothy really enjoyed the field courses, such as Winter Field Ecology and Field Techniques, in her major that taught her about the research that can be done. These types of courses and experiences allowed her to experience first-hand how our ecosystems are impacted. It’s not surprising then that her post-graduation plans include a bike ride across the country to Portland, Oregon. And she isn’t peddling just to see the country. Dorothy and 10 other students are doing this to raise funds for Elijah’s Promise, an organization with whom they’ve been volunteering 8 hours each month, learning about the nonprofit soup kitchen and the fight against food insecurity and poverty.

Afterwards, Dorothy plans on gaining additional experience by working in the public or nonprofit sectors, focusing on waste management, the environment, and/or equity. She is considering AmeriCorps or the Peace Corps programs to gain perspective and then possibly continuing her education in graduate school.

“I want to be prepared to face new challenges, communicate with different people, and learn how to effectively convey my environmental and societal values to fight for environmental justice and systemic oppression.”