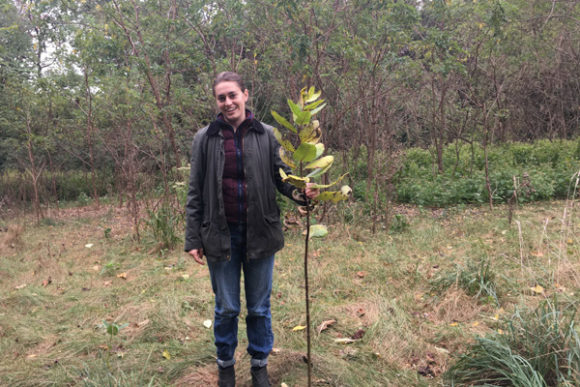 Tucked on the back of the Rutgers University Inn on Cook campus lies a hidden and once forgotten gem: the Arbor Trail.

Four years ago, senior environmental planning and design major Elliot Nagele was walking along the inn’s lawn and noticed this hidden Rutgers relic overgrown with weeds, leaves and tree stumps. Intrigued, Nagele, went inside the inn to talk to its director, Deana Pagnozzi.

“He met with me and said, ‘I see you have a trail back there, I am part of the SEBS program and I’d be really interested in cleaning it up,’” Pagnozzi recalls. “I said ‘absolutely,’ and Elliot immediately became a part of our family.”

And so began the Arbor Trail restoration project. Not only has this project turned into an internship, but it has also fostered relationships between the School of Environmental and Biological Sciences, Mason Gross School of the Arts and the Game Research and Immersive Design (GRID) project, under the Rutgers Division of Continuing Studies, which also manages the Rutgers Inn.

Originally built in 1911 as part of the Sydney B. Carpender estate, which is now the present site of the Rutgers University Inn, the Arbor Trail was a gift to Carpender’s wife, Louise Johnson, daughter of Johnson & Johnson founder James Wood Johnson. Rutgers acquired the estate in 1965 and the trail was actively in use until the mid-1970s.

The Inn is an auxiliary unit at Rutgers – meaning it does not receive direct funding from the university. Maintaining the trail fell to the wayside because of budgetary decisions decades ago until Nagele, with help from faculty adviser Jean Marie Hartman, associate professor of ecological design and plant ecology research, got involved.

Hartman remembers Nagele’s excitement when he told her about the trail. The two agreed that it would be the perfect centerpiece for his senior thesis project. Although removing rocks and tree stumps required serious manual labor, Hartman says Nagele was not concerned by any difficulty the trail posed.

“He really worked very hard cleaning and restoring the trail, especially in the middle of the summer all by himself,” Hartman says. “He’d clean up some parts, but then they’d get messed up again. He would plant something but then a deer would eat it. I think he really learned how much management went into working on something like this, especially something that would extend beyond his term here.”

Pagnozzi insists that without Nagele, the trail would still be unwalkable. “Other than restoring the trail, he’s the reason so many departments are now working with us on this specific project, building upon his original idea,” she said.

An internship to restore the trail further has been developed by SEBS. Hannah Consiglio, a senior bioenvironmental engineering major, is designing a rain garden retention pond that will create a flowing stream and creating an app about the trail’s history and the native plant species found there.

“Finding relics of the past, even stone paths and walls set by people who lived 100 years ago is so exciting,” Consiglio says. “Though the trail’s purpose has somewhat changed since then, it’s a special feeling to walk and work on that same path.”

What once was just an anniversary gift for a Johnson & Johnson heir has been transformed into a learning ground for students who have created a sculpture garden and are now working on a bee pollinator project.

And it all started from one student’s curiosity to uncover the past and adapt it to the future.

Read the history of the trail renovation.