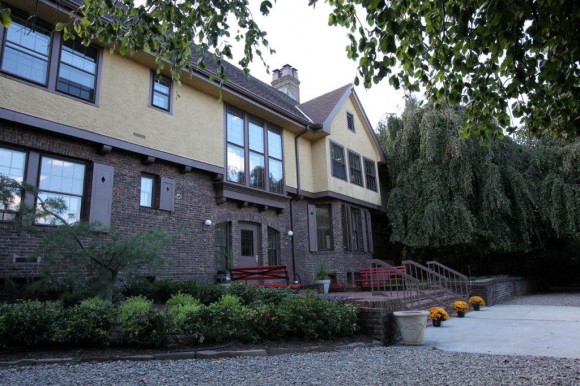 The back of the University Inn and Conference Center overlooks a rolling field with a trail through the adjacent woods.

Literally off the beaten path in the woods on the Douglass Residential Campus, Eliot Nagele (SEBS ’15) stumbled across a hidden trail while doing clean-up around a nearby creek. Intrigued, Nagele set about investigating this forgotten trail that wound its way behind the historic Carpender House, known to most of us now as the University Inn and Conference Center. What Nagele discovered led him on a quest to restore the trail as an educational and recreational destination for the Rutgers community.

Constructed in 1911, the Carpender estate, with its Tudor revival style manor, was created to resemble a rolling English countryside, with a field lined by woods and sloping to a creek below. Along the trail in the woods, you’d find two ponds and unique landscape plantings and trees installed by original owner Sydney Bleecker Carpender. A horticulture enthusiast, Carpender created a picturesque man-made environment.

The trail had been used for years for recreational purposes and also served as an outdoor classroom for the university. However, as budgets tightened, the University Inn, which is self-supporting, had to make fiscal decisions that prioritized the needs of visitors and guests at the Inn, and the trail fell by the wayside. Ten years later, covered in overgrowth and the remnants of felled trees from Hurricanes Irene and Sandy, Nagele encountered his buried treasure and his mission to bring it back to its former glory has not wavered since. 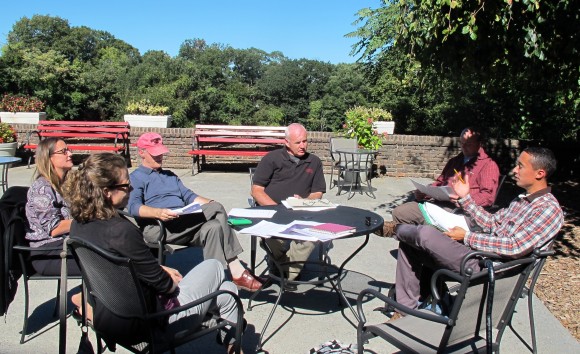 “He already knew a lot about the facility before he had even come in,” said Deana Pagnozzi, director of the Inn. “He knew a lot about the trail and the history of the trail, so he did some phenomenal research before he came to the property.” Nagele asked Pagnozzi about the property and why the trail had become overgrown. “The question to us was would we be interested in having him work on the trail? Of course we were thrilled for him to volunteer.”

From there Nagele went about putting all his ducks, or rather advisors, in a row. An environmental planning and design major, Nagle went to his faculty advisor Jean Marie Hartman to develop an internship in the spring of 2013. Dean of Academic Programs Rick Ludescher provided key support, steering him to appropriate faculty members and funding Nagle’s proposal through the Office of Academic Programs. University facilities and SEBS faculty offered their support and Nagele consulted with Mike Ayers, associate director of grounds operations at Facilities, Laura Lawson, chair of the Department of Landscape Architecture and Jason Grabosky, professor in Ecology, Evolution and Natural Resources.

Nagele spent much of the summer identifying and mapping the trees found along the first half of the old trail. He needed to categorize the trees according to their size and species as well as whether they were native or invasive. In order to map the trees, Nagele started with a zero point and made a grid of flags every 30 feet, all the way through. He measured each tree’s distance from the flags, so he had a coordinate of each tree. During this phase, he did not employ advanced technology using GPS; his tools consisted simply of a compass and tape measure.

When discussing the project, Nagele uses the collective “we,” so one might easily assume a crew helped him with this massive undertaking. Apart from the university’s grounds crew helping to remove dead trees and clearing the brush, Nagele has worked alone. “He was out there all summer in the blistering heat by himself,” said Pagnozzi. Not only did Nagele tag all the trees by himself, he also did all the planning and called the meetings. 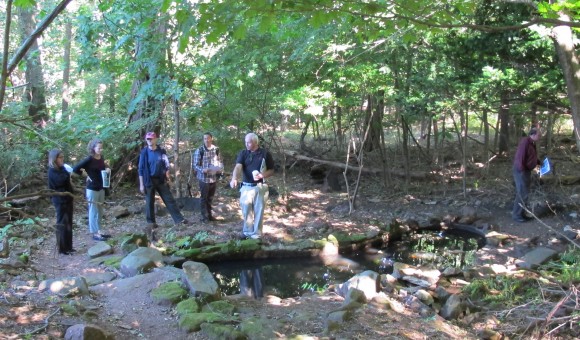 The first part of the trail has been cleared of brush and trees. Over the summer, the pond was completely cleaned and a bench for seating was installed nearby. Reviewing the progress are (l-r) Deana Pagnozzi, Laura Lawson, Rick Ludescher, Eliot Nagele, Mike Ayres, and Jason Grabosky (far right). Photo by Jean Marie Hartman.

In late September, Nagele gathered his facilities and faculty advisors for a walk along the trail to see the improvements and possibilities as well as to discuss future work. Plans include engaging volunteer groups to help with more large-scale projects. As Nagele’s major advisor says,  “Eliot is doing an exceptional job in getting the University community interested in this largely forgotten gem by approaching student groups, faculty and administrators with ideas of how they can help with the site.”

While Nagele doesn’t expect the project to be finished before he graduates in 2015, he is anticipating it being walkable, and “at least being in a good spot by the time I leave. I’m trying to get an honors thesis to do this.” His hope is to gather a lot of information on how much time it would take to do certain steps and see “how many years it would take to be accomplished.”

Nagele can at least see the forest through the trees. “It would take a lot to really get it at the point it needs to be, but in order for it to be walkable to the end and back, it would need to have some signage.”

Nagele has a great appreciation for the unique aspects of the entire site. A walk through these woods on a crisp autumn day can reveal a story of a time when this piece of property was in its glory. Nagele spots an elm leaf and picks it up. Noting the rarity of elms after so many succumbed to Dutch elm disease, he searches the canopy to locate the elm, spots it and mentally notes its location for future mapping. He points out some of the unique specimens that Carpender planted: lace bark pine, a rare species from Asia with white bark; tamarack, a coniferous tree that is not an evergreen and sheds its needles. He also points out that the two ponds served an interesting purpose for the house. As part of an early air conditioning system, cold spring water was piped into the house. The drainage water flowed through pipes out to the first pond, spilling over to flow into the second pond, and ultimately draining down to the creek. 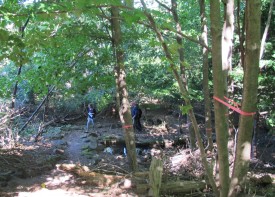 From the Inn, the trail descends to the first pond. In the foreground are tagged trees. Photo by Jean Marie Hartman

While falling leaves from Carpender’s plantings swirl in the air, a visit to the property stirs up names of ghosts from Rutgers’ and New Brunswick’s past: Carpender, Johnson, Neilson, Voorhees. Stories of the Inn suggest the presence of a ghost in the new wing. Why would a ghost haunt the new wing of the building? Could it be they weren’t happy about the new addition? Or was it Sydney Bleecker Carpender looking forlornly over his forgotten trail? Maybe the fulfillment of one student’s mission will not only enhance the grounds of the University but will also please a spirit from the past.