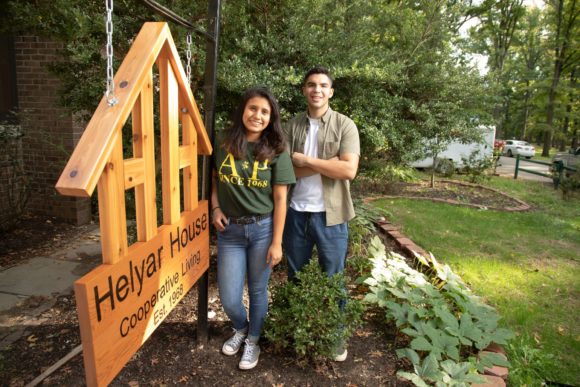 Helyar House is a cooperative living community on the George H. Cook Campus where house members band together to work, live, and learn in a more affordable on-campus residence. They plan, prepare, and serve their own meals. They work cooperatively to clean and maintain their space. They study hard. And they have some fun along the way.

This year, Helyar House celebrates its 50th anniversary. While some things have changed, take it from these two residents: the spirit of cooperation and family remain the same.

Maria Guevara Carpio has always been family-oriented. “I knew that Rutgers would be a big place, and I was looking for a way to be part of a smaller, supportive community,” she says. Helyar House fit the bill. She moved in as a freshman and, now in her sophomore year, serves as the house’s social chair. In this role, she coordinates events like pumpkin picking, paintball, or even simple bowling nights. She also organizes larger-scale events like overnight trips to the beach or mountains.

Outside of these events, though, it’s the smaller, everyday gatherings that will stay with her long after she leaves. Like many families, the Helyar House family gathers for house clean ups, holiday gift swaps, and SuperBowl parties. “We also study together,” Guevara Carpio says. “I see people studying and it motivates me to work harder.”

On a personal note, Guevara Carpio also says that living in Helyar House has helped her break out of her shell. “Since it’s a small community, it forced me to meet all kinds of people,” she says. “You live with these people, so if you have a problem with someone or something, you have to communicate—it’s a small area we all share! It really helped me get out of my comfort zone and grow.”

The best part about Helyar House, though, is that it’s not necessarily all sunshine and rainbows, says Guevara Carpio, and that’s when the family environment is the most valuable. “We have family dinners with whoever is in the house, and talk about everything, from light topics to politics,” she says. “It’s good to know that whenever we are struggling with something, there’s someone here to rely on.”

It’s Gerardo Quilies’s fourth year living in Helyar House, and he says the experience has benefited him academically, financially, and personally. “It’s all about what you make of it,” he says. “For me, having all these people close by allowed me to build individual relationships with all different kinds of people. I’ve made my best friends here.”

In fact, it was the people living in Helyar House who convinced him to join in the first place. He wasn’t sure what to expect; he only knew that he’d be working in exchange for financial assistance. He wasn’t sure it was even for him. But once he started to interview with the current residents, “I was sold,” he says. “Seeing how it impacted their lives became more important than any financial help I’d get from living here.” In the following years, he’s seen something similar happen with potential housemates he interviews.

Like many Helyar House alumni, one of Quiles’s favorite memories is his first Thanksgiving there. Residents invite their friends and family, and they cook for everyone. He remembers feeling overwhelmed because of the volume of food they had to cook, but everyone came together and pulled it off. In a way, that’s the whole essage of Helyar House. “We aren’t as focused on the individual, but rather the individual’s responsibility for everyone else. It’s a family unit,” he says. “That family attitude is still very much alive at Helyar House. The spirit of individuality is still alive. We take pride in the fact that we’re not like every other dorm, and hopefully we won’t ever be. That difference gives us character.”

Editor’s Note: this article originally appeared in the fall 2018 edition of Explorations.