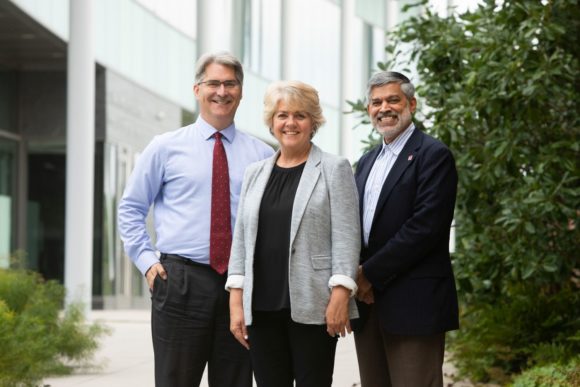 Some researchers make breakthroughs in the lab. Others must travel the world in search of answers. With interests ranging from the human microbiome to health and nutrition, the SEBS researchers profiled below achieve “ah-ha” moments around the globe.

Daniel Hoffman’s research focused on how poor growth early in life can influence health in adulthood. This research brings him to countries like Brazil, Mexico, South Korea, and Kenya, where nutritional deficiencies are more common than they are in the U.S.

Together with Jim Simon of the Department of Plant Biology, he is currently in the middle of a five-year, USAID-funded study in Kenya, examining the effectiveness of nutrient-dense vegetables on the micronutrient status and growth of children. “The quality of a child’s diet is a key determinant of growth, so if we can improve their nutrition, we can improve their growth,” he explains. That said, there is a need for interdisciplinary intervention, especially in these poor areas. “We can understand the biological problems but if the economy isn’t improving, the people can’t address them or change their dietary habits,” he says. “To best understand how to improve nutrition and health in these regions requires more interdisciplinary research.”

Department of Biochemistry and Microbiology

How do modern lifestyle practices—from the way we eat to the way we treat diseases—impact the human microbiome? That’s the question leading the research interests of Maria Gloria Dominguez-Bello, whose most recent work centers on how the microbiomes of babies born vaginally can differ from those delivered via cesarean section. “Babies born via C-section bypass the birth canal, and therefore miss their first exposure to the microbes there,” she explains. “This research attempts to restore this exposure and measure the effect on the microbiome.”

So far, she has studied babies in Puerto Rico, New York, Spain, and Chile. Preliminary results show that there are indeed differences in the microbiome of C-section babies, and that a restoration method can work. “If we can understand what is driving immunity disorders—asthma, allergies, celiac, and others—and which microbes are needed at what age, we can try to restore them,” Dominguez-Bello says of future translational impacts. “The real probiotics are yet to come.”

As a food engineer, Mukund Karwe’s research generally centers on food manufacturing and processing, preservation, and safety. Recently, he partnered with the Institute of Chemical Technology in Mumbai to create and promote quinoa-based cereal and snack food in India. “We made breakfast cereal with 100 percent quinoa, 100 percent amaranth, and a fifty-fifty blend,” he says. “And we asked people what they thought.” As it turns out, the blend was preferred, which was great news for Karwe. “Quinoa is healthy and gluten-free, and a very good source of plant-based proteins and nutrients,” he says.

Karwe’s food manufacturing expertise was also put to work in Thailand, where he partnered with the Asian Institute of Technology in Bangkok to create a functional ingredient from fish waste. “There is a lot of fish waste generated worldwide, and we can use that waste to extract useful things using modern technology,” he says. Both of these projects were funded by Rutgers Global.

Editor’s Note: this article originally appeared in the Fall 2018 edition of Explorations.