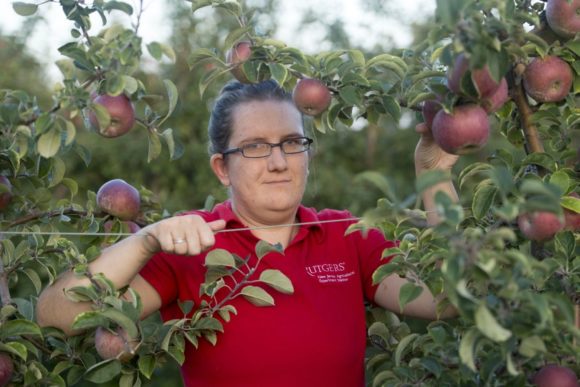 Move over microbreweries. Megan Muehlbauer believes she has stumbled upon the next big food trend and she wants to help build a thriving industry in New Jersey.

Muehlbauer, a Rutgers New Jersey Agricultural Experiment Station agent based in Hunterdon County, is laying the groundwork to revive the state’s hard cider industry that dates back to colonial times and was prosperous for generations until it ended during prohibition.

She is testing more than two dozen varieties of cider apples to determine how well they grow in New Jersey including the Harrison, once a classic New Jersey cider apple, the Esopus Spitzenburg, a white tart apple that had been a favorite of Thomas Jefferson, and others like the Kingston black with skin that is such a deep red color it appears almost purple.

“These aren’t the giant sweet apples that we have come to know,’’ Muehlbauer said.

Heirloom varieties are small and tart and pose a challenge for growers because they come from trees that produce less fruit than more common varieties. They may not be ideal to sell directly to consumers at local farm stands, but at a time when the market for artisanal and locally grown food is rapidly expanding, heirloom varieties have their own strong appeal. When processed into hard cider they produce a unique tasting experience that is a cut above most commercial ciders, Muehlbauer said.

“Modern ciders are super sweet because they don’t have the acidity and tannins that add astringency and depth,’’ she said. “Hard ciders made from heritage varieties are way more interesting in terms of flavor and complexity.’’

While a few farms in the state are trying to bring back these varieties, Muehlbauer’s research is the first time Rutgers has tried to grow heritage applies to boost the industry. Heirloom varieties can be profitable for farmers interested in starting their own cider mills, similar to the state’s growing wine industry where farmers grow and process their own grapes.

One of the most important things we can do is help farmers make informed decisions about what they plant.’

Muehlbauer is investigating how well varieties with names like the Golden Russet, a prized cider apple, the Blue Pearmain, Calville Blanc and others could grow in New Jersey’s challenging climate with hot, humid, rainy summers that put a lot of disease pressure on trees.

Part of the goal of Muehlbauer’s research is to demonstrate to farmers how quickly they can transform existing orchards to produce cider apples. Instead of ordering trees from a nursery which can take years to grow, this spring Muehlbauer used wood from the desired new varieties, obtained from a USDA repository, and grafted it onto existing Fuji apple trees at the Snyder Research and Extension Farm in Pittstown. The new trees will start producing their first crop next year.

She has already seen some encouraging results. The trees have not shown evidence of fire blight, a disease that can strike and kill trees following wet warms springs, which can be common in New Jersey and is one of the prime threats to apple trees.

As her research moves forward, Muehlbauer plans to collect data to determine which trees would be the most productive and be able to adapt to disease pressure in New Jersey.

“One of the most important things we can do is help farmers make informed decisions about what they plant,’’ Muehlbauer said. “If I can narrow it down to five varieties that have great yields and can handle disease pressure really well, I will feel like I have made a contribution to the industry and can help it move forward.’’