Maria Gloria Dominguez-Bello, professor of biochemistry and microbiology, leads a team of researchers calling for the creation of a microbiota vault to protect the long-term health of humanity. Photo: Jeff Heckman

A Rutgers University–New Brunswick-led team of researchers is calling for the creation of a global microbiota vault to protect the long-term health of humanity.

Such a Noah’s Ark of beneficial germs would be gathered from human populations whose microbiomes are uncompromised by antibiotics, processed diets and other ill effects of modern society, which have contributed to a massive loss of microbial diversity and an accompanying rise in health problems. The human microbiome includes the trillions of microscopic organisms that live in and on our bodies, contributing to our health in a myriad of ways.

The researchers, who outline their proposal in the journal Science, liken their idea to the Svalbard Global Seed Vault, the world’s largest collection of crop diversity created in case of natural or human-made disasters.

“We’re facing a growing global health crisis, which requires that we capture and preserve the diversity of the human microbiota while it still exists,” said Maria Gloria Dominguez-Bello, the lead author and a professor in Rutgers–New Brunswick’s Department of Biochemistry and Microbiology and Department of Anthropology. “These microbes co-evolved with humans over hundreds of millennia. They help us digest food, strengthen our immune system and protect against invading germs. Over a handful of generations, we have seen a staggering loss in microbial diversity linked with a worldwide spike in immune and other disorders.” 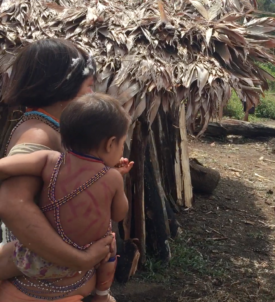 In a previous study, Dominguez-Bello found increases in microbiome diversity of urban children – but not urban adults – following immersion in the lifestyle of this Venezuelan rainforest village. Photo: Maria Gloria Dominguez-Bello

Dominguez-Bello and her coauthors – Rob Knight of the University of California-San Diego, Jack A. Gilbert of the University of Chicago and Martin J. Blaser of New York University Langone Medical Center – said it may be possible one day to prevent disease by reintroducing lost microbes. But that could happen only if researchers first collect beneficial microbes from remote Latin American and African populations that have the greatest microbiota diversity before they, too, experience the effects of urbanization. People living in urbanized societies have lost a substantial part of their microbiota diversity; the gut flora of most Americans, for example, is half as diverse as that of hunter-gatherers in isolated Amazonian villages.

An international effort, including significant funding, would be needed to collect and store the collected microbes in a global repository.

Since the early 20th century, diseases and disorders such as obesity, asthma, allergies and autism have increased dramatically, first across the industrialized world and more recently in developing countries. Scientific evidence increasingly points to disturbances to the microbiota during early life, and resulting metabolic abnormalities during development, as a key contributing factor. Treatment costs for obesity and diabetes have surpassed $1 trillion, leading the authors to compare worldwide microbial loss to climate change in terms of importance to humanity’s future.