Message from Bob Goodman, executive dean of the Rutgers School of Environmental and Biological Sciences.

I am delighted to announce the appointment, effective immediately, of Professor Gloria Dominguez-Bello to be the interim director of the New Jersey Institute for Food, Nutrition, and Health.

Gloria joined Rutgers earlier this year as the Henry Rutgers Professor of Microbiome and Health. Her tenure home is in the Department of Biochemistry and Microbiology, School of Environmental and Biological Sciences, with a joint appointment in the Department of Anthropology, School of Arts and Sciences. She previously was on the faculty of the New York University School of Medicine, Division of Translational Medicine.

Her current work focuses on the establishment and functions of human microbiomes in infancy as determined by route of birth (via the birth canal or by C-section), as well as comparisons of human microbiomes across human populations, for example the spectrum of just-contacted hunter-gatherer societies and modern urban societies. Impact on microbiota transmission and colonization, such as C-section and hygienic practices, is another area of her recent contributions. Learn more about Gloria’s work here. 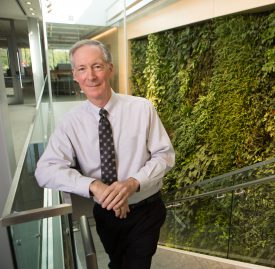 I would also like to acknowledge broadly, as I have on several occasions in smaller venues, the seminal contributions of the NJIFNH’s founding director, Professor Peter Gillies. Peter has been tireless in his efforts, from fundraising and planning for the IFNH’s iconic home on Dudley Road on the Cook Campus, to networking throughout the university and beyond, and building alliances and partnerships that are the signature of this important initiative. Peter received a fond farewell from faculty and staff.