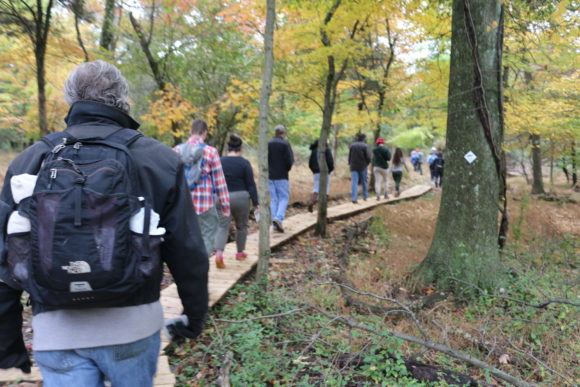 A guided walk through autumn foliage commemorated the opening of the new trail. Photo by Lara Watrous

The Rutgers Ecological Preserve and Natural Teaching Area is a 360-acre wooded preserve located between Busch and Livingston Campus in Piscataway. The preserve–one of the largest contiguous patches of forest in the area–is habitat to diverse wildlife including wild turkeys, pileated woodpeckers, salamanders, red tailed hawks, herons, snakes, turtles, fish and foxes. The landscape covers fresh water streams, mature forests and meadows. Six trails criss-crossed the eastern portion of the preserve, and now for the first time, access to the western portion has opened up through a seventh trail. 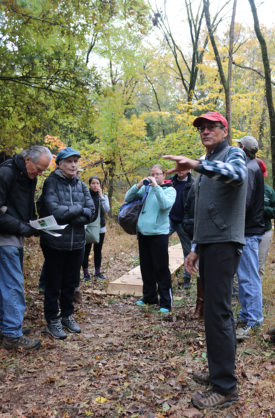 Lathrop gives the lay of the land along the Wildlife Loop Trail. Photo by Lara Watrous

The EcoPreserve land stewards have been hard at work blazing the new 1.4 mile section of trail. The new section has been named the Wildlife Loop Trail and winds through maple-oak-cedar woodlands and open glades. “I am really excited to be able to open up the whole western section of the EcoPreserve to access for nature study, hiking, running, mountain biking, and snowshoeing/skiing,” stated EcoPreserve faculty director, Rick Lathrop. The trail traverses a variety of terrain, bringing the grand total of trail mileage in the EcoPreserve to nearly eight miles in length.

Literally more than a ton of lumber needed to be hand-carried over a 1/3 of a mile into the Preserve to build a bridge across the headwaters of Metlar’s Brook and a 100 yard-long boardwalk over a wetland seep (where groundwater naturally comes to the surface). Lathrop commented, “Let’s just say there were a lot of sore shoulders after that effort.” The bulk of the work was undertaken by the land stewards over the past two summers: Ashley Goncalves, Mikhail Harvey, Darrell Jones, Rachel Jones, Alex Morris, Alex Stollery and Lathrop. Volunteers from the student chapter of the Wildlife Society and the Rutgers University Outdoors Club, as well as outside groups including the Raritan Valley Road Runners and the Friends of the Ecological Preserve assisted in the trail construction.

The opening of the new Wildlife Loop Trail at the Rutgers Ecological Preserve was commemorated by a guided walk on October 28, led by Lathrop.

The EcoPreserve was formally established in 1976 by the Rutgers Board of Governors as the Rutgers Ecological Preserve and Natural Teaching Area with the goal of preserving the natural ecological characteristics of the property and that it serve as outdoor teaching area for the university. Present day management of the EcoPreserve tries to maintain this balance between preserving, if not restoring, the area’s ecological system and natural values while continuing to expand the EcoPreserve’s role as an educational, recreational and aesthetic resource for University students, faculty and staff as well as local citizens. Read more about the history of the preserve. 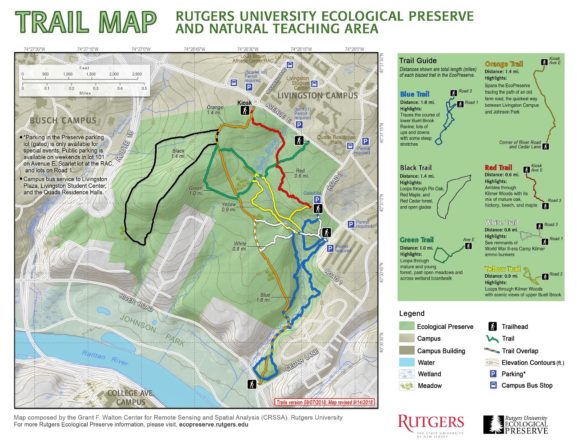