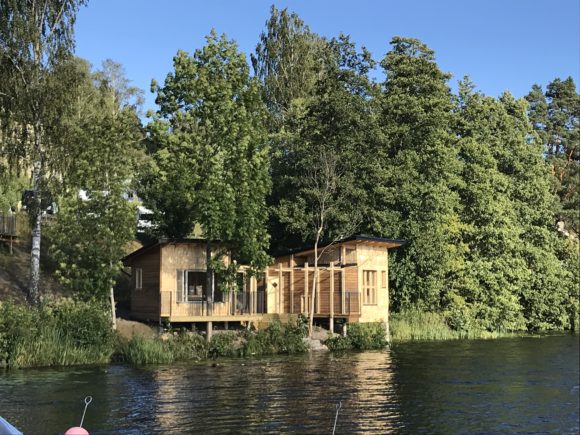 The completed community space provides access to the water in Dals Långed.

Sophia Trinidad, a senior in the Landscape Architecture program at the Rutgers School of Environmental and Biological Sciences participated in a summer abroad program offered through the University of Washington, Seattle for a design/build project in Sweden. The program was in collaboration with HDK-Steneby, a design and crafts school located in Dals Långed, 170 km north of Gothenburg, Sweden. Situated in the picturesque rural countryside, the Dals Långed community is substantially multicultural despite its small size, due in part to the school’s long tradition and strong international reputation. The multicultural character has been further enriched due to an influx of refugees from countries at war.

The focus of the program was to create a new public space to fill the need that wasn’t supported by any of the existing spaces in Dals Långed–an outside meeting place–where people of different ages, cultures and interests could meet and interact. The refugee community was fully involved in the planning of the project which consisted of: summer kitchen, deck with firepit, sauna and boardwalks connecting to the lake. The Studio’s title is: “Creating Home Amidst Displacement.”

Below, Trinidad summarizes her experience abroad: 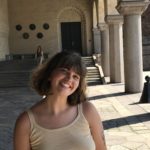 The Design/ Build project I participated in this summer took place in the beautiful small town of Dals Långed, Sweden. Led by Daniel Winterbottom of the University of Washington and Luka Jelusic of Steneby Academy of Arts and Crafts (University of Gothenberg), our goal was to create a public space to unite the diverse communities living in the area, including Syrian refugees.

The craft school housed us and was a major partner in the project. Fourteen University of Washington students participated in the program. We also worked closely with six Swedish students who not only designed and constructed with us but were kind enough to teach us about their disciplines in wood- and metal-working. 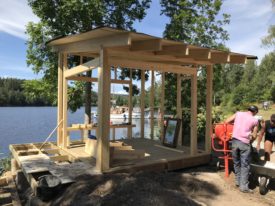 Students and community members were involved in the planning and building of the structures.

These Swedish students and the community of Dals Långed at large were warm and welcoming and provided us with so much insight and talent. We could not have completed the project without them.

The program began with two weeks of designing in both small groups and together as a team. We received an enormous amount of community feedback during our community meetings throughout the design charette (a period of intense design activity), and the community aspect was one of the most rewarding and educational parts of my time abroad.

The community, in collaboration with our team, decided that a sauna, an outdoor kitchen, and a courtyard wooden deck connected by boardwalks would best serve the community as a public space. 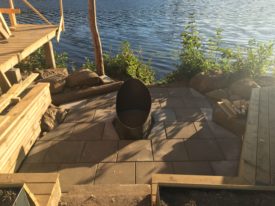 Our site was directly on Dalslands Kanal–a stunning site for the public space and an incredible place to work every day. Our team of students, with the help of Daniel and Luka, led the construction from the pouring of the footings through to the installation of the shingled façades.

We were fortunate to have the community members participate in the design and construction on volunteer days. We were definitely cutting it close to our deadline, but we completed all aspects of our project in time for the dedication. We built for a total of six weeks, which seems so short looking back on all that we accomplished.

I am grateful to have learned so much about the construction process, and it was truly rewarding to see our hard work become something so beautiful and well received by the community. I encourage all students to participate in a program like this one. What is required is a taste for adventure, an interest in creating public spaces, and a strong work ethic.