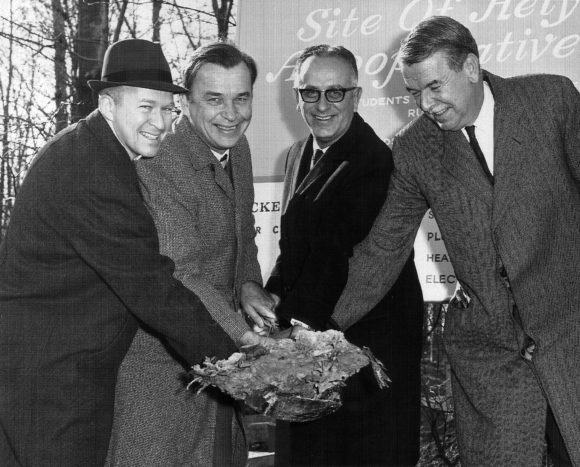 Dick Merritt (far left) at the groundbreaking for Helyar House, which was opened in 1968 on the George H. Cook Campus of Rutgers-New Brunswick.

On September 22, Helyar House alumni, students, faculty, staff and friends will gather to celebrate the 50th anniversary the opening of Helyar House in the fall of 1968. Dick Merritt, an alumnus, inspired by the early alternative housing provided by then director of resident instruction Frank Helyar, honored his legacy when he served in that same role over 30 years after Helyar’s appointment. Reprinted from Explorations, Spring 2015.

Dick Merritt, who earned his bachelor’s degree in agriculture and environmental science in 1954 and his master’s and doctoral degrees in horticulture in 1956 and 1961, respectively, began as an undergraduate at Rutgers’ “ag school,” residing in a cooperative living house on campus. It was called Phelps House and was located where the Sears store currently stands. He was provided this opportunity thanks to professor Frank G. Helyar, who created low-cost alternatives to college dormitories during the Great Depression of the 1930s. 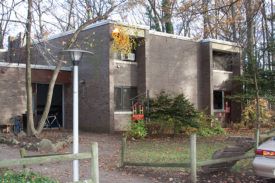 When Merritt became dean of resident instruction of what was then the College of Agricultural and Environmental Sciences, he remained dedicated to Helyar’s vision. In the 1960s, he worked closely with Phelps House alumni (and those of the Towers, the piggery, and other places where Professor Helyar housed students) to raise money to build a dedicated unit for cooperative living on campus. The new facility, named Helyar House, served to memorialize Professor Helyar’s impact on so many students in need of affordable housing. It was completed in 1968 and could accommodate up to 40 men each year. In 2002, it became coed.

Today, Helyar House residents have a greater responsibility of self-government than those living in traditional residence halls. Under the supervision and guidance of a University Resident Counselor, house members work together to achieve common goals in a supportive living environment. In addition to reduced housing and meal expenses, Helyar House students are also awarded scholarships, which are primarily supported by Rutgers’ cooperative living alumni. Each year, over $36,000 in scholarship funds are provided.

Merritt was dedicated to Helyar House, serving as secretary of its alumni association. When he died in 2011, he left a bequest to help continue the experience of on-campus, cooperative housing started by professor Helyar, and carried on today by the alumni he helped.