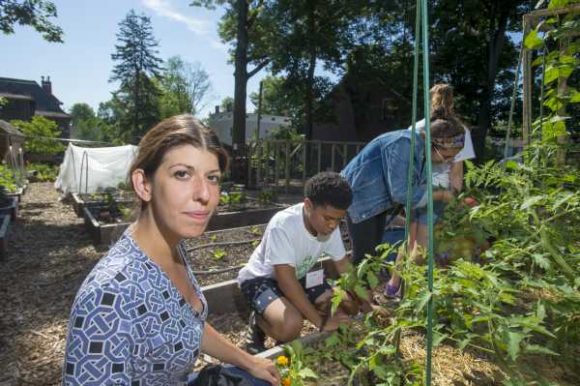 Pig races, tractor pulls and prize-winning produce are the hallmarks of traditional 4-H fairs. But today’s fairgoers also can participate in 3-D printing, robotic and drone demonstrations and follow the progress of student-run urban gardens.

Each of these activities honor the national organization’s original mission: to introduce land-grant universities – and their innovations – to the next generation.

“4-H is often a New Jersey child’s first interaction with Rutgers,” said Rachel Lyons, chairperson of Rutgers University’s Department of 4-H Youth Development. “4-H takes that university knowledge and brings it to the people across the state.”

4-H’s roots can be traced back to a corn club for mid-Western farm boys started in 1902.

“There were researchers (across the country) coming up with great hybrid seed corn,” she said. “But farmers, who are not early adapters, weren’t interested in giving it a try.”

Children, however, are natural risk takers, so the researchers asked farm children to grow the new corn, which outperformed their fathers’ crops 16 to 1 and led to U.S. farmers’ mass adoption of hybrid seed corn.

From those first corn clubs – and canning clubs for girls – 4-H clubs multiplied across the country and the world, including in New Jersey, where the organization adapted to the changing landscape and demographics.

The national 4-H program officially took off after Congress passed the Smith-Lever Act in 1914, which created the Cooperative Extension Service. This newly formed entity – funded by federal, state and local government as well as private donations – enabled Rutgers as the land-grant university in New Jersey to extend its research and practical education to people where they live. (Rutgers’ Cooperative Extension is the off-campus division of the New Jersey Agricultural Experiment Station, based at the university.) 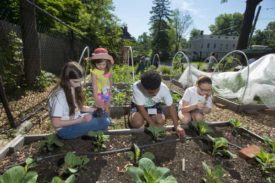 Initially focused on advancing agricultural discoveries in the Garden State, the 4-H-Rutgers partnership and its mission have evolved over time.

“There are not as many cows and sheep as there used to be,” said Lyons, who grew up on a dairy farm in Hillsborough and participated in 4-H growing up. “But there’s a whole new group of kids who are interested in where fresh, healthy food comes from and making sure everyone has access to it – and they are not just kids growing up on farms in Hunterdon County.”

In Essex and Hudson counties, where food deserts have replaced farms, interest in traditional 4-H agriculture-based programs is booming, said Marissa Staffen, a Rutgers’ county 4-H agent in Essex County. Student and volunteer participation is high in the multiple community gardens she oversees in towns like Montclair, Newark, Jersey City, East Orange and Kearny. There, children take part in planning, planting, cultivating and harvesting gardens. For many, it is their first hands-on experience with agriculture.

“The kids are always impressed and inspired by what they are seeing in the garden,” said Staffen, who is also a 2012 graduate of Rutgers-Newark’s School of Public Affairs and Administration. “When kids pick their first food off a plant that they grew in the garden, many ask if they can eat it, as if they need to have it packaged and sent to a store first.”

The hope is that by educating today’s urban youth about food systems and their community’s food needs they will have the knowledge to advocate for themselves and their neighbors tomorrow.

Beyond agriculture, 4-H STEM programs available across the university allow New Jersey youth to experience Rutgers’ latest research through hands-on investigations alongside scientists and engineers. Science Saturdays, for example, connects middle school students with researchers like Brooke Maslo from the School of Environmental and Biological Sciences who shares her latest discoveries about bats and their habitats.

These interactions benefit both children and faculty, said Lyons.

“For those with projects funded through the National Science Foundation, there are broader impact requirements,” she said. “We train faculty to take their current research and message it in an appropriate way to students of varying ages so they can meet that goal – and our goal of getting high-level science out to kids who may not have access to it.”

All that knowledge converges at the annual 4-H fairs, said Lyons, which are taking place primarily in July and August.

“At the fairs our kids are able to see their peers showcasing not just their animals and harvests but also their science or art project,” she said. “They are learning about public presentation, teamwork and the commonalities of their experiences.”