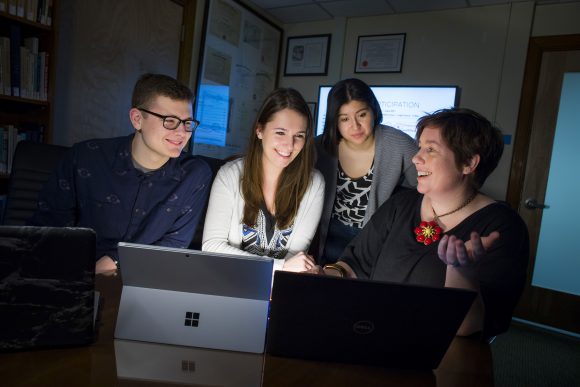 Research At SEBS Has The Opportunity To Effect Real Change. Here Are Just Two of Those Projects, With Input from the Faculty And Students Involved. 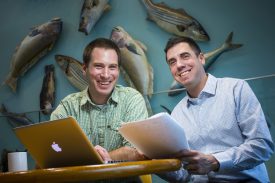 John Wiedenmann’s research interests center around how to manage fisheries in a sustainable way. The problem is that there are two categories of fish populations: one is the data-rich category, which is well researched and well understood; the other is data-poor, meaning that researchers don’t quite know how many of these fish are out there, nor do they have a lot of data on these species. “In our country, even if we can’t estimate how much is there, fisheries are mandated by law to set a catch limit,” Wiedenmann says. “So what do we do when we don’t know much about the fish out there? How can we set an amount that we think is sustainable?”

A working group, formed shortly after the law took hold, came up with a solution. It was a scoring method, where fisheries score between 10 and 15 attributes of the fish, to determine an estimated population. The problem? “It had never been evaluated,” says Wiedenmann.

So he teamed up with doctoral student Christopher Free. Free’s project applied this method to data-rich populations to see how accurate it was. “The first finding was that there was no real relationship between the original method and what the stock status was,” Wiedenmann says. “Second, Chris revised the method to take into account the attributes that had predictive power and reran it. That actually performed very well.” Today, this new method is available online for fisheries looking to achieve more sustainable catch limits.

A doctoral candidate and NMFS-Sea Grant Population Dynamics Fellow, Christopher Free’s research interests lie in how quantitative and interdisciplinary methods can provide solutions for aquatic conservation. So it was only natural that he turned his attention to the current challenge facing fisheries: how to handle data-poor populations. “It’s a cool area of study because the majority of the world’s fisheries are data-limited, and it’s an intriguing problem to figure out how to manage fisheries given the data realities,” he says. “In some ways, I think you can get more bang for your buck in making a difference in sustainable fisheries by working in these scenarios where there’s limited data as opposed to lots of it.”

Free’s project holds value for a number of areas. First, it brings value to sustainability initiatives that need a better method for predicting populations. Secondly, because Free made his method public via a web application and computer program, his findings will directly impact fishery managers looking for a better way.

This project also held value for Free himself: “As a student, it was an exciting opportunity for me to start learning a lot of the more technical and analytical sides of fishery science, and to gain new quantitative skills.” 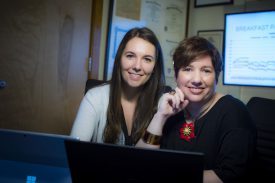 It’s a common belief that breakfast is the most important meal of the day—especially for kids, since an empty belly can set the tone for a distracted day at school. But what if every student was offered free breakfast? Would their attendance, tardiness, and disciplinary numbers improve? That’s what Cara Cuite is trying to find out.

Cuite’s project evaluates Breakfast After the Bell, a program implemented in 2014 by New Brunswick Public Schools that offers free breakfast to all K–8 students, regardless of their ability to pay. Cuite and her team interviewed school staff. They conducted a teacher and parent survey. And they organized student focus groups. Then, they compared this feedback with data on student tardiness, attendance, and disciplinary action.

“What we found was that there is a huge spike in the number of students eating breakfast when the project starts—that’s what we expect and what we want to see,” Cuite says. “But then, in New Brunswick, we were seeing a decrease in those numbers. And we wanted to find out why.”

First, students were getting tired of the food being served, since there wasn’t much diversity in the options. Plus, while teachers and parents overwhelmingly support the program itself, they expressed concerns about the quality and healthfulness of the menu. “We shared our findings with the school administration and they used our data to make the decision to take on a new food service provider,” Cuite says. “We’ve already had an impact.”

To say that community health is important to Gina Pope McKeon is an understatement. She holds undergraduate and master’s degrees in nutrition—both from SEBS—and is working towards a doctoral degree in applied and community nutrition. So when the opportunity arose to work with Cuite on her New Brunswick Breakfast After the Bell research project, Pope McKeon jumped at it. “I wanted to be involved in research that meant something,” she says. “It’s really important that these students are eating breakfast, and I’m interested to see if it can help them in school. Especially living so close to New Brunswick and having lived in the city as a student, I felt I should have an idea of what’s happening in our community.”

Pope McKeon has been involved in many aspects of the project, from developing parent and teacher surveys to organizing student focus groups to analyzing the data. She also got the chance to assist with presentations to the New Brunswick superintendent and administrators, which is an invaluable experience for her. “I’ve learned how to navigate relationships with other institutions outside of Rutgers,” she says. “As academics, we can sometimes get stuck in the academic world. But, especially in nutrition, the community aspect is so important. Being able to learn how to bring our findings to the community so they can use them is an experience I know will help me going forward.”