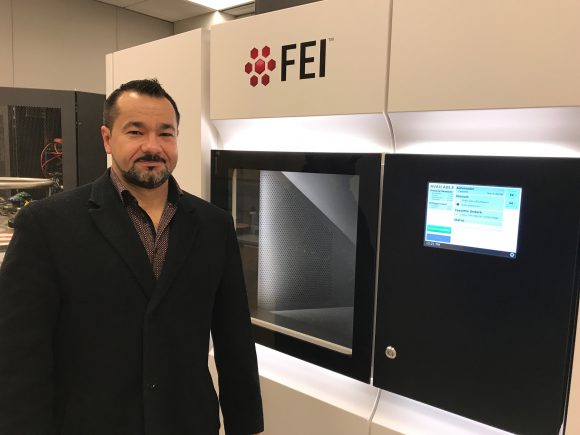 “I have always enjoyed biology and consider myself very fortunate to be able to do what I like in life.” Ever since he was a child, Arek Kulczyk, a new assistant professor in the Department of Biochemistry and Microbiology, has been passionate about biology. He’s pursuing his dream career at Rutgers.

He spends much of his time, “doing exciting science at Rutgers that can have implications for cancer and neurological disorders using state-of-the-art equipment located in the Institute for Quantitative Biomedicine” on the Busch campus. A structural biologist, what Arek is doing in his lab is applying cryo-electron microscopy (cryo-EM) technology and single-molecule techniques to understand the role of mitochondrial DNA replication and repair in cancer and in neurological disorders.

Arek was born in Krakow, Poland, and grew up in Bielsko-Biala, “a beautiful city located in Carpathian Mountains.” After completing a master’s of science degree in Poland, he earned a doctoral degree in biophysics from the Laboratory of Molecular Biology at the University of Cambridge, UK. He completed his post-doctoral work and a junior faculty appointment at Harvard Medical School, during which he and his colleagues determined a structure of the replisome using cryo-EM technology.

“The cryo-EM structure provides the first detailed snapshot of the molecular machine that synthesizes DNA and reveals fundamental mechanisms that allow the copying of two antiparallel DNA strands at the same time,” he explained.

“It’s the age of renaissance for the field of cryo-EM, which combines concepts from multiple fields including biology, chemistry, physics, mathematics, engineering and computer science,’ he added. “In 2017, the Nobel Prize in Chemistry was awarded for the development of cryo-EM methods for structural biology, so this is a very exciting time to work in the field.” 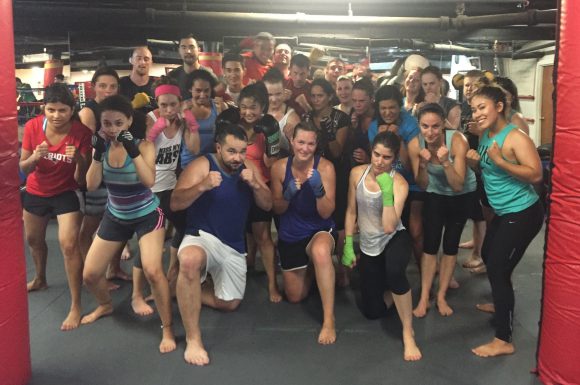 Arek Kulczyk (3rd from left) with members of his kickboxing class in MA.

It’s hard to miss the sense of optimism that Arek shares about the future with respect to the impact of the research he and his colleagues conduct. “For the first time ever, we can determine three-dimensional structures of large multi-protein assemblies in their cellular context at the atomic resolution,” he said. “These structures may subsequently facilitate development of novel therapeutics for the treatment of a variety of diseases, including cancer.”

When not busy in his lab, Arek is busy pursuing a number of interests. “I love martial arts and experienced the thrill of stepping into the ring in a number of kickboxing and Muay Thai (a combat sport that originated in Thailand) contests.” He spent more than 10 years working as a kickboxing instructor at a gym in Cambridge, MA, during his time at the Harvard Medical School. 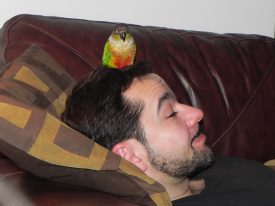 Arek Kulczyk with his conure, Misty-Misty.

Another one of his hobbies is scuba diving. He’s such a devotee that he can claim to have scuba-dived around the world, including the Great Barrier Reef in Australia, Brazil and the Caribbean islands.

And, let’ not forget his menagerie of pets. “I have salt and fresh water fish, a couple of budgies, a green-cheeked conure named Misty or as she calls herself Misty-Misty, a bearded dragon and a panther chameleon.”